Birthday Cards (and a contest!)

My birthday isn't until next weekend, but my (wife's) niece is about to turn 22 and so the in-laws use the occasion of her birthday party to hand me some birthday cards. 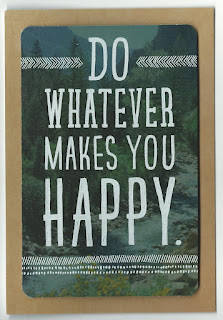 I got three cards for my birthday. You'll see them in a minute.


Earlier in the week I wrote a blog post about what I might buy with my expectant birthday cash (and how I would celebrate if I didn't have to share my "special" day) ...but when I arrived at the party yesterday I completely forgot that anyone would give me anything.

I didn't open my cards right away, and I wasn't sure I'd open them at Bridget's party. Sometimes I do, sometimes I don't. But then, my brother-in-law handed me a large cardboard box.

And, taped to the bottom of the large box (with rolled scotch tape, not blue painter's tape) ...was the aforementioned three cards.

What's this? Someone put enough thought into my birthday to choose three single sports cards for my PC?

Joe has given me sports card gits in the past - but they've always been blaster boxes. And his father (who recently passed) often gave me blasters for Christmas so I assumed that without his guidance as to what I collect the card gifts would be a thing of the past. Boy, I was wrong!

This might be the first time in my life that anyone has gifted me singles without me first saying
"I picked out the cards I want. Now put some wrapping paper on 'em and put 'em in my stocking, Mom." So I would have been happy if one of the cards fit my PC. 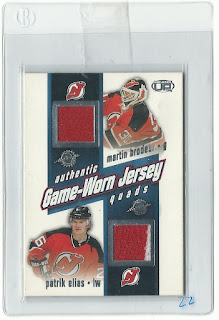 We're all Devils fans in my fam (they're the reason I became a Devs fan) so there had to be at least one Jersey card..and it's a jersey card. It looked familiar though... 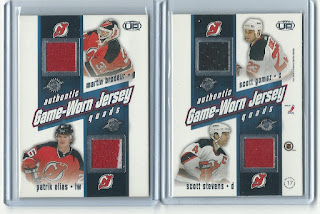 Turns out it was a dupe. But hey, at least I can show off both sides of the quad now!

Joe isn't a baseball fan (Pop was the only one on his side of the fam) but he knows I love my Sawx. He had heard something about Manny Ramirez but wasn't certain if Man-Ram was dead or a PED cheater. That's ok though, I wasn't certain if I had this card or not... 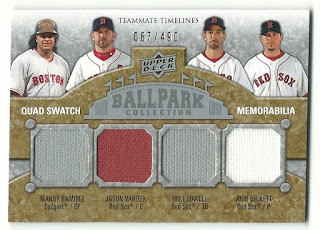 I did have two other Ballpark Collection multi-swatch cards, but not this one. Here's how they look together:

Last but certainly not least...I used to have a bit of an Edmonton Oilers PC. They always seemed to have players I like - Jason Arnott, Ryan Smyth, Tommy Salo, Fernando Pisani, Georges Laraque.. Taylor Hall - so they were my favorite Western Conference team (and still are, I s'pose)

Joe must have remembered that when he picked out this gem: 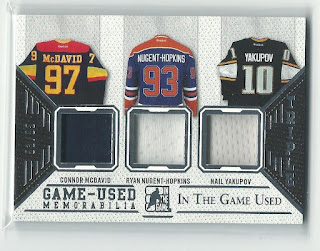 Yeah, it's unlicensed and the players aren't actually pictured but.. wow. Nail Yakupov! And it's numbered to 55!

(okay, maybe that McDavid guy is the draw here lol)


This sure was better than a blaster. Heck, this might have been better than three blasters.  And that's not all I got for my not-quite birthday: there was $125 cash in those three cards (the greeting cards, that is) and $60 worth of lottery scratch-offs cause the fam likes to gamble: 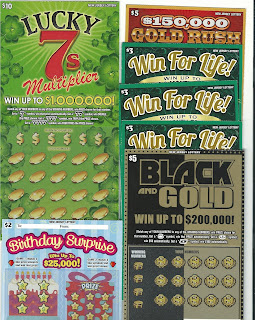 I haven't scratched them off yet, and so I thought it would make a decent contest. Leave a comment with your guess of how much prize money these scratch-offs will yield and if your guess is exactly correct I will send you a bubble mailer full of cards (if there are multiple winners you'll each get prizes.)

If no one guesses the exact dollar amount, a PWE prize will be sent to whomever comes the closest. The conest will run until Wednesday, when I also reveal what I bought with my $125 cash.