If you missed my last post, I'm doing a 'tour' of my sports card and memorabilia collection by city. Our first stop was Anaheim. Today the tour bus takes us to Atlanta.

Atlanta has three pro sports teams - the Braves, the Falcons, and the Hawks. Technically though, they only have two. The Braves' new ballpark is in Cobb county, not Fulton county. Someone familiar with the area will have to tell me if this counts, or if it's akin to the New York Giants and Jets playing in New Jersey. 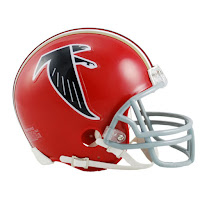 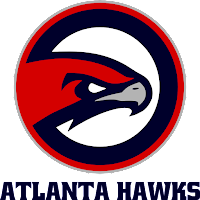 Each of Atlanta's three teams have played 50 seasons in the city (or reasonably adjacent) and they have exactly one championship between them - the 1995 Braves. Key members of that World Series winning squad have recently been inducted into the Baseball Hall of Fame, including manager Bobby Cox, general manager John Schuerholz, and pitchers Greg Maddux, Tom Glavine, and John Smoltz.


Chipper Jones will join them in Cooperstown this summer. Let's hope he doesn't say anything stupid in his speech.


Of the 500 cards I ordered from COMC in 2017, two of the cards I was most excited about featured Hank Aaron. But, as I game out each post in this Sports Card Tour series I realize that the vintage card doesn't belong here - since it was released when the Braves were still in Milwaukee. This Tier One bat relic qualifies though: 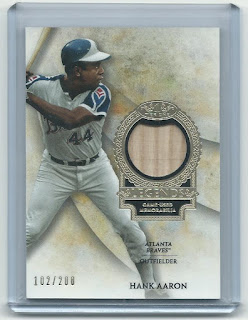 When the Black Friday sales are nigh, I like to pick out a few cards to target and add to my watch list. But COMC had just run a promotion two weeks prior, so I really didn't have anything in mind. Then I saw this card and grabbed it on sale for $15.25. The vintage Aaron cost a lot more....


I've never cheered for an Atlanta team more than I did in Super Bowl 51. The Falcons weren't just beating Tom Brady and the Patriots - they were embarrassing them. And then Matt Ryan fumbled it away. I wanted to set my Falcons cards on fire after that. I didn't, of course. But I've got very few Falcons 'hits' anyhow. Behold, my best Falcons cards! 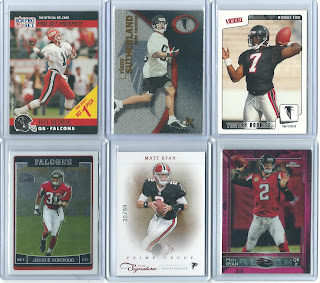 That's a Jeff George Pro Set 'error' I picked up for about a buck, a Vinny Sutherland E-X rookie card that's only valuable to me, a Michael Vick Victory RC, and a Jerious Norwood Chrome RC - plus two Matt Ryan parallels I bought on COMC before the Superb Owl.

Those are my best Falcons cards.

Oh wait...it just so happens that my favorite athlete of all time played for Atlanta. 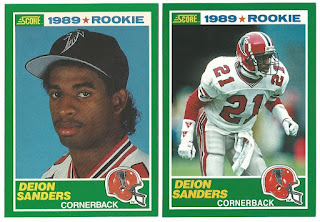 Um...no. I've never liked Deion, but I love those red Falcons unis. I even bought a Sanders Starting Lineup figure from 1990, just to have that red helmet. The 2012 Score card on the right is a flashback reprint.

No, my favorite former Falcon is of course Brett Favre. I have about 600 Favre cards in my collection (really should count them someday) including these three...

...and every Favre rookie year card (except for the Wild Card stripe parallels and the Star Pics auto) Here are a few from his season of sitting behind Chris Miller and being insulted by Jerry Glanville. 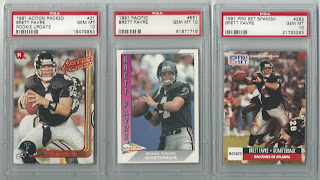 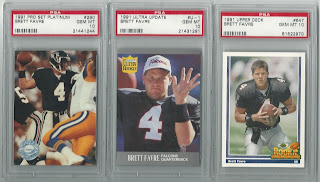 There are 26 Braves cards in my 'hits' box; I include Milwaukee Braves in this total since my cards are sorted by franchise. Probably should have filtered them out for purposes of this post - but the Aaron and Eddie Mathews are two of my favorite Braves cards. 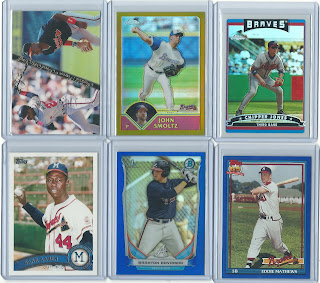 Braxton Davidson was a prospect I collected before giving up on prospecting in favor of vintage. I held onto this blue refractor, even though his minor league stats are going south.

There are 108 Braves cards in my baseball binder. Here's a cross-section page:


I haven't forgotten the Hawks..but the rest of the NBA has (ba-dum-tiss)

My blogger buddies Jon (A Penny Sleeve for Your Thoughts) and Billy (Cardboard History) have re-ignited my interested in collecting basketball cards. I've received a lot of great cards from them, and augmented their additions with a few purchases from COMC.

The Spud Webb Hoops card is one of my all-time favorites. The Laettner Matrix card somehow scanned without the shiny; for 57 cents I added it to the COMC 500.

The 'Nique relic was also from COMC, but I bought it more than a year ago. I like these Stadium Club Full Court Press cards so much I bought another one.. which you'll see in a future tour stop.

In a previous post I mentioned that I actually miss the Atlanta Thrashers. They weren't exactly a successful franchise, having been swept by the Rangers in their only playoff appearance. But they did have some great players during their 11 years in Atlanta. 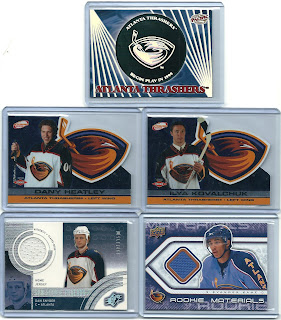 A young franchise could not ask for a better pair of building blocks than Dany Heatley and Ilya Kovalchuk. Both players were fantastic from the start of their NHL careers, finishing 1-2 in rookie of the year voting. And then tragedy struck when Heatley was involved in a car accident that claimed the life of teammate Dan Snyder (pictured at the bottom left.)

As the Thrashers franchise floundered and relocation rumors swirled I started collecting more Atlanta items - Ilya Kovalchuk in particular. Kovy was traded to the Devils after he declined to re-sign with the Thrashers due to their uncertain future. 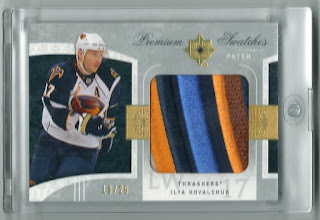 His Devils contract was controversial (and initially illegal) and the way he weaseled out of it still leaves me bitter to this day. But I'm never going to discard his Atlanta items. Look at the breaks on that patch! I can't recall how much I paid for this card, but a replica Kovy jersey only set me back about $40 on eBay: 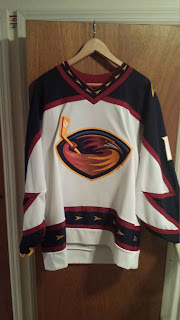 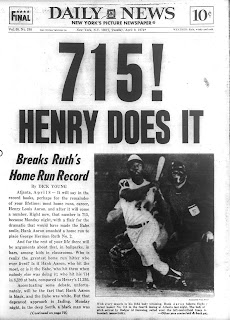 Why hasn’t Hollywood made a movie about Hank Aaron? There are movies about Jackie Robinson and the racist taunts he endured while breaking the color barrier. There is a movie about Roger Maris and the stressful season he endured while chasing a home run record held by Babe Ruth. Aaron's story has both - and yet it hasn't been told on the silver screen. The fact that Hammerin' Hank had to spend an entire off-season sitting on 714 and fearing for his life because of it is unimaginable to me. We have not celebrated this great man enough.

Favorite Braves player: none yet, but I'll be keeping an eye on Dansby Swanson and Ozzie Albies
Favorite Falcons player: Julio Jones

Favorite Hawks player: Dennis Schroder is pretty good, but honestly I haven’t watched the Hawks since that 60-win team a while back. Let’s see who they get in the lottery.


Braves card I'd like to own: Someday I'd love to get my hands on the Hank Aaron Home Run King card from 1974 Topps. It's not cheap though, especially in top condition.

Falcons card I'd like to own: I had a copy of this Topps Favre “rookie” card but it was damaged and I never replaced it. 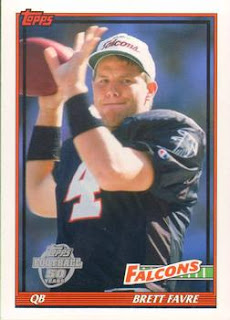 This card begs the question - why didn’t Topps include Favre in their 1991 flagship set?

Thrashers card I'd like to own: Perhaps this bland Chris Chelios sunset card from 2010-11 Score. 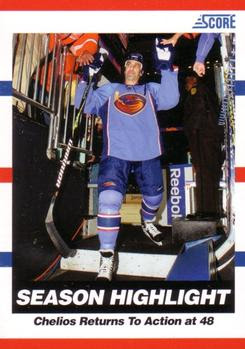 Next tour stop: Baltimore. This was quite a long one. I'll try to shorten these posts in the future.