The Collector's Sports Card Tour is finally back on the road after some technical difficulties. This weekend we're in Chicago. 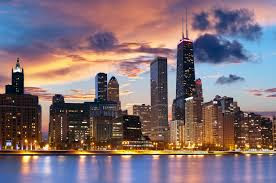 Chicago has five pro sports teams, and squeezing them all into one post would be a great way to earn myself a tl;dr so we'll focus on the 'B' teams today and hit the ballparks tomorrow. 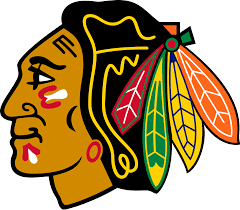 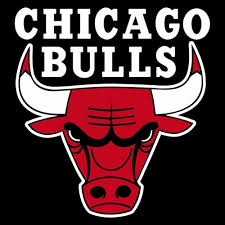 The Blackhawks have won three Stanley Cups since 2010, doubling the franchise's total and matching the six championships won by the Bulls. The Bears have one Super Bowl win, but that 1985 team was one of the most dominant and entertaining in NFL history. 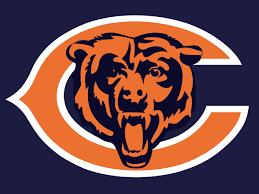 I was in Kindergarten when Jim McMahon, William "Refrigerator" Perry & 'Daaa Bears were doing the Super Bowl Shuffle, so I didn't get to see just how great their defense was. By the time I became a football fan Walter Payton had retired, Mike Ditka had been fired, and Jim McMahon was backing up Randall Cunningham in Philly.


Most of my best Bears cards are long gone from my collection, such as the 1978 Topps Walter Payton card I bought from the card shop I practically lived at (and briefly worked at) as a kid. At one point the '78 Sweetness was the longest-tenured card in my collection, but I made the mistake of sending it to PSA in my initial grading submission. It came back an EX-MT 6, and I think I sold it (might have cracked it open first, not really sure.) 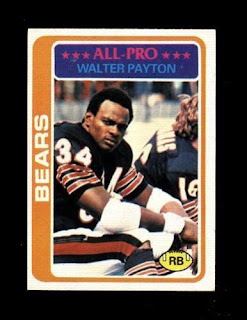 In retrospect, I really wish I'd held onto that card. Its the only 'vintage' Payton card I've ever owned, the only other card I have from his career is the Record Breaker card in my 1988 Topps set. He didn't have a regular base card because he retired before the set was produced. (Topps didn't include Dan Fouts in that set, for the same reason.) 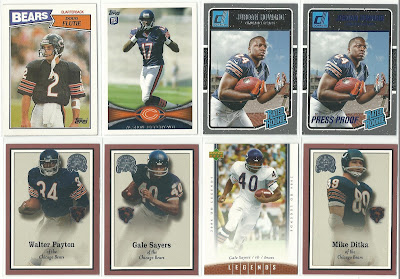 The only Payton card I have at all is from 2000 Fleer Greats of the Game. I actually had the full 100-card set, but I broke it up to make room in my collection. I saved most of the Hall of Famers, including Ditka and Gale Sayers. The rookie cards in the top row are the best Bears 'hits' I have. Pretty pathetic, even for a Packers fan. 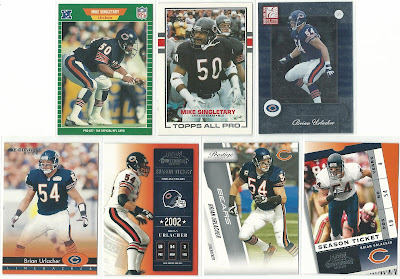 The only other Bears in my star box are legendary linebackers Mike Singletary and newly-minted Hall of Famer Brian Urlacher (I don't have any Dick Butkus cards) Urlacher's 2000 Finest RC is the last card I need in that set. I actually bought a copy for about $9 on COMC, but when I got it in hand it appeared to be trimmed.

There is one former Bears player whose cards I would definitely collect - if he had any. In high school my wife was casual friends with offensive lineman Todd Burger.

I knew immediately who he was because he played in the 1990's, when I was a football-obsessed teen who read every name on every roster in every Athlon Pro Football Preview guide. If his name was Todd Smith maybe I'd forget, but I was also obsessed with The Simpsons so naturally I'd see his name listed on the Bears depth chart and think Mmmm Burger...


At one point in my early teens I was following all four major sports fairly equally. But I seemed to have this knack for losing interest in things when its popularity was peaking. This was the case with basketball, a sport I had enjoyed until Michael Jordan and the Bulls dominated the NBA like no other team in my lifetime. 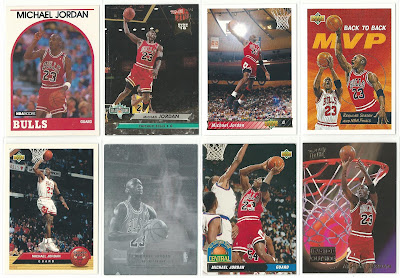 I know I'm in the minority here, but I hated Michael Jordan. It wasn't just that he won all the time, it was his arrogance - things like hustling teammates for money he didn't need, or demanding that everyone pass him the ball in an All-Star Game.

Being a fierce competitor is one thing, but MJ was borderline psycho. Even his HOF induction speech was basically "F*** you all, I'm the greatest." It's hard for me to root for a guy like that, especially when other legendary athletes like Wayne Gretzky, Magic Johnson, and Ken Griffey Jr. are so much more humble.

Most of my favorite basketball players never won an NBA title - thanks in large part to Jordan, Scottie Pippen and Phil Jackson. The last NBA Finals game I watched for a very long time was in 1998, when the Bulls faced the Utah Jazz for the second time in as many years. 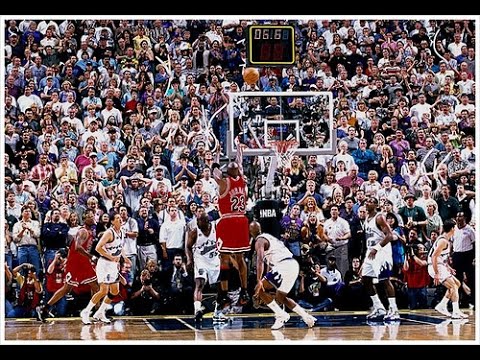 I was at my best friend Brandon's house when MJ hit that game winning shot over Bryon Russell (which I still refer to as "The shove") and argued with the TV that it should have been an offensive foul. Brandon just shrugged. It's Jordan, man. I can't say that Bran was a major MJ fan.. but the day I met him he was sporting a replica Jordan jersey.

Even though Jordan retired after that sixth title, I had pretty much had it with basketball after that. It was like being a baseball fan of any team but the Yankees.. you're just swimming against the current. The way sports fans still deify him baffles me. Recency bias works in almost any other case, but there is absolutely nothing LeBron James can do on or off the court to become the GOAT (I'll have more about this in my Cleveland post.)

I just want to share one more MJ fact that annoys me. When a great athlete can't make up his mind about retirement and/or doesn't know when to quit, talking heads always bring up the same name: Brett Favre.

To my count, Favre announced his retirement three times. Michael Jordan retired four times - three times from the NBA (1993, 1998, and 2003) and once from baseball. Favre didn't actually walk away from the NFL at any point - until he walked away for good. Then again, maybe Jordan's first retirement wasn't actually voluntary.


Perhaps we should get to the Blackhawks before this whole post becomes an anti-MJ rant :) 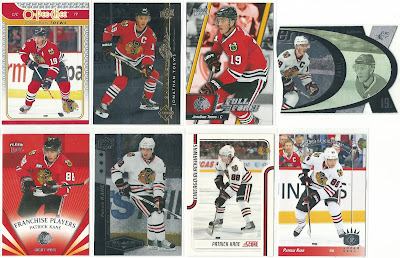 The 'Hawks have been a Stanley Cup contender throughout this decade. Their mini-dynasty has been anchored by "Captain Serious" Jonathan Toews and 2016 MVP Patrick Kane. Toews, Kane, and defenseman Duncan Keith were named as three of the NHL's 100 Greatest Players of All-Time (I wrote a post about this at the time; disagree with Keith's selection especially.)

Kane and Toews have been rewarded with lucrative, salary cap-crunching contracts which have damaged the team's depth. Their rookie cards are quite expensive, too. When I put together a near complete run of Upper Deck hockey sets from 2008 to 2016 the only set I never finished was '07-08. That's because the rookie cards for these two alone would have set me back well over $200. 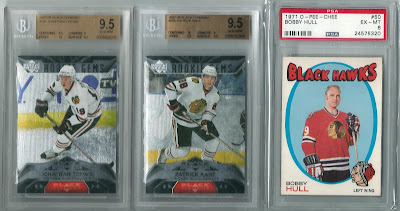 At one point I had a Patrick Kane Ultimate Collection autographed RC. He was (and still is) one of my favorite hockey players, and his autograph is much nicer than most stars. But when the Blackhawks were winning Cups and the card soared to $300 I sold it. I held on to my Black Diamond RCs though. (Still missing the Carey Price from this set.) 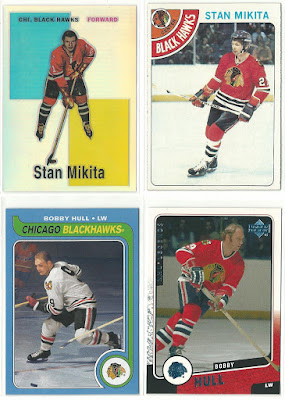 Did you know the Blackhawks franchise changed its name? Until 1985 they were known as the.. Black Hawks. Crazy, right? 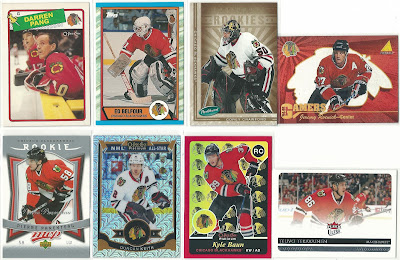 The rest of my 'Hawks hits. I've mentioned the Baun before, it's the only red rainbow parallel in my OPC Platinum Franken-set. The Teravainen Ultra RC came from a pack of cards my daughter picked out for me when she was five years old. I'm keeping that card forever - even if he is a Carolina Hurricane.


With the Blackhawks having a rare down year and the Bulls and Bears still struggling (there's a stock market joke in there somewhere) it's been a long winter in the Windy City. But there's always baseball...


Bears card I'd like to own: I've got to get some Walter Payton cards.

Bulls card I'd like to own: If I'm going to get serious about collecting the 1988-89 Fleer set I'll have to get the Michael Jordan and the Scottie Pippen RC. I don't mind paying for Pippen but I don't love the idea of spending $100 on a base card from 1988.

Blackhawks card I'd like to own: A Jeremy Roenick relic.