O-hi..there! The Collector's Sports Card Tour 2018 has arrived in the Buckeye state. Today's stop is the queen city of Cincinnati. 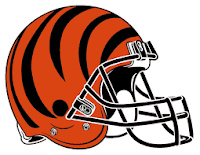 Cincinnati has two pro sports teams: the Reds and the Bengals. The Reds have won five World Series titles, the last coming in 1990. 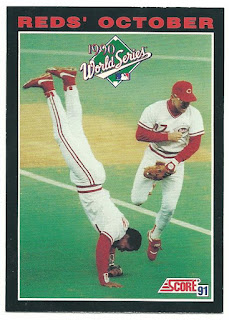 The Bengals' last playoff win was also that season; they are 0-7 in the postseason under current head coach Marvin Lewis. Boomer Esiason was Cincy's signal caller in Super Bowl XXIII, when the Bengals were three minutes away from the title. 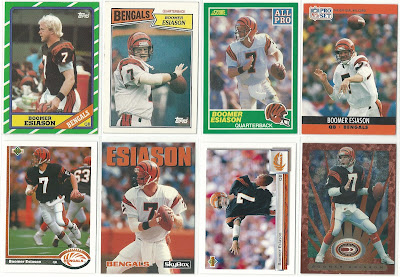 My father-in-law and I used to listen to Boomer and Carton in the mornings; I never liked Craig Carton (even before he got busted for running a ticket scam) but I liked Boomer enough to grab a few of his cards on COMC, including this Panini Playbook relic: 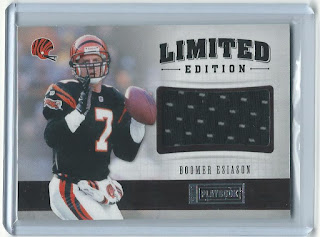 Limited Edition is actually correct in this case, these are #d to 49. I think I paid $3.25, though I can't recall if that was a sale price or not.

One of the last football boxes I got as a gift was a mini-box of 2003 Finest my mom bought me for Christmas. Somehow I pulled a Carson Palmer autographed RC..but I sold it shortly after, because the Beckett value was $150 at the time. That wasn't the only time I got lucky pulling a Palmer.. 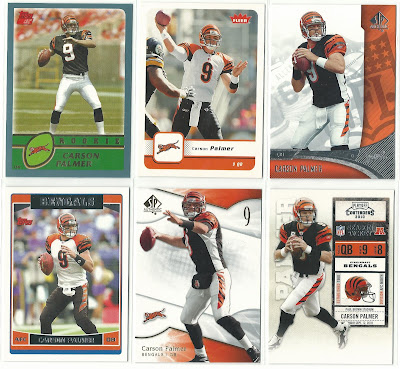 My LCS ran a "player of the day" promo and I won a free pack of cards when the pack I purchased yielded the SP Authentic Palmer at the top right.

I don't have any Andy Dalton cards (except for one in my 2016 Panini Contenders set) but I do have ...an Akili Smith insert!

Now that I have more wisdom (and less cash to blow) I focus on vintage. 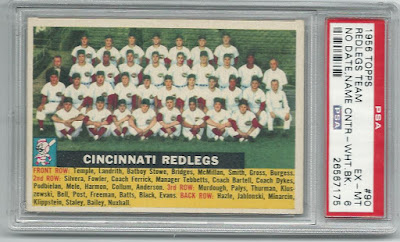 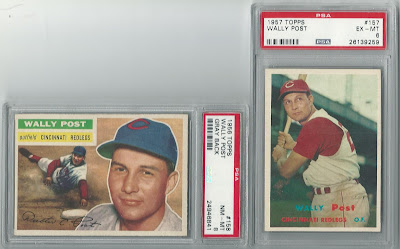 At the height of the hysteria over Communism, the Reds changed their name to 'Redlegs.' 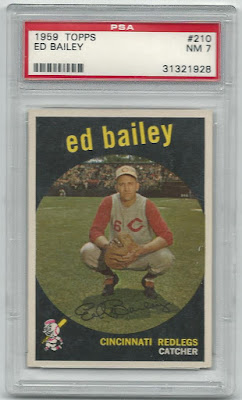 Like most of my vintage cards, the oldest Hall of Famer in my collection came courtesy of COMC. "Sunny" Jim Bottomley played 1st base for the Cardinals from 1922-32, but joined the Reds in '33 when this card was released: 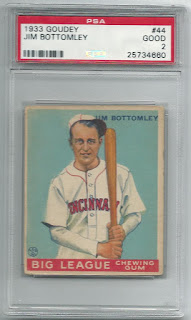 When this card popped up I think it had a 'poor to fair' condition note - but I could not see any paper loss, pin holes, or other obvious flaws. For about $19 I took a gamble, and I'm glad I did. The 'Good 2' grade is due to creases that only show through on the back. 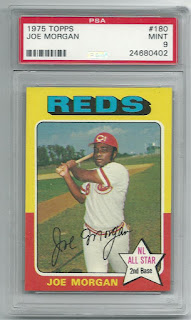 This is probably going to bother some bloggers, but I have very few cards from the 1970s. I started collecting in the '80s, and when I hunt for vintage gems I often focus on cards from the 1950s and select sets from the '60s. As a result, '70s sets often fall through the cracks. 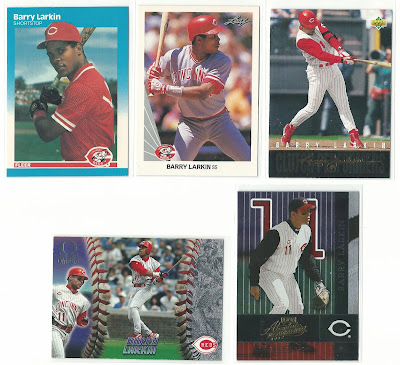 Contest time! The first person to correctly identify which Reds legend is missing from my card collection wins a PWE prize (Hint: it's not Barry Larkin.) 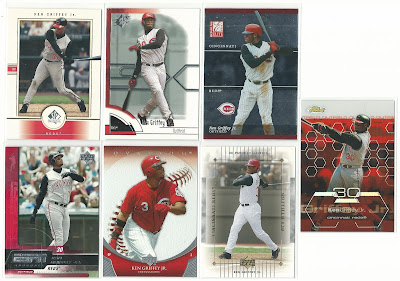 Ken Griffey, Jr. sacrificed a lot to play for his dad's former team. It's a shame that Cincy didn't have enough talent around him to chase a championship. The 2003 Finest card on the right is a refractor. I had a Griffey Reds relic but it was immediately sent to Corky (Pack War) as payment for a custom card set he made. 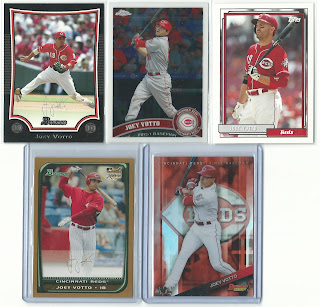 I'm not sure if Canadian slugger Joey Votto is a drinker, but his surname reminds me of this scene from The Simpsons. The Bowman's Best orange refractor was an impulse buy on COMC. Just like the Boomer relic, the Votto set me back $3.25.

Adam Sanders, author of the blog Cardboard Clubhouse recently wrote a post about the demise of Cincinnati Gardens, home to the NBA's Royals from 1957 to 1972. Both my Oscar Robertson cards picture him with Milwaukee, not Cincinnati, so I'm adding this card to my want list: 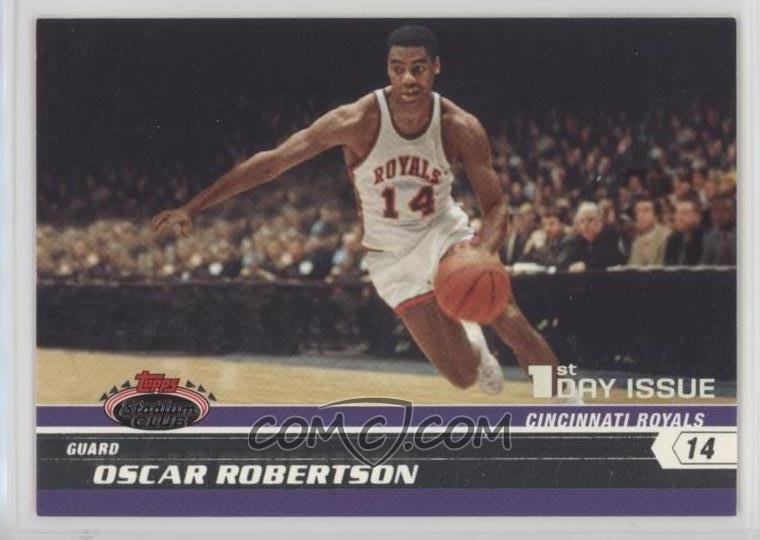 I wanted to mention pro hockey in Cincinnati, but I seem to have misplaced my Robbie Ftorek O-Pee-Chee card from the WHA's Cincinnati Stingers (and it doesn't picture him in the right uniform anyhow.) 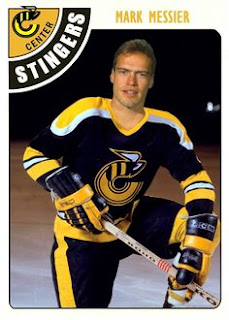 This Mark Messier custom card was borrowed from a Maple Leafs-centric blog; the author (I can't find his name anywhere) has a ton of great customs available for sale.

There is an NHL team in Ohio, but it's not in the 'nati. The NHL's Blue Jackets are up the road in Columbus - closer to Cincy than Cleveland. Since they're probably not interesting enough for their own post I'll squeeze them in here.

The Blue Jackets have yet to win a playoff series in their 18 year-history, but they're currently leading the Devils and Panthers in the wild-card race. Two-time Vezina trophy winner Sergei Bobrovsky is having yet another stellar season between the pipes. 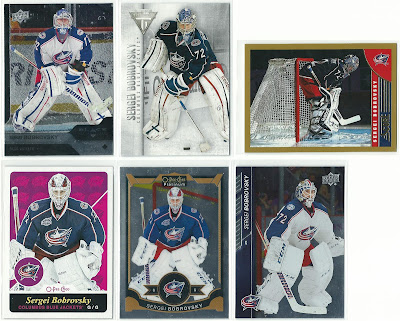 Former #1 overall pick Rick Nash is still the franchise leader in almost every offensive category. I have a lot of trouble with Nash's base cards - he's no longer a star but I can't demote him to the commons binders until I make more room. (Once this tour ends I'll have a lot of reorganizing to do.) 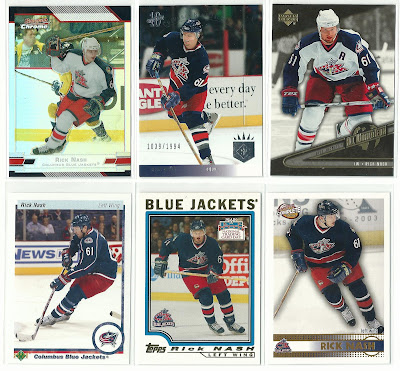 The two Jackets autos in my collection have ties to my favorite teams: John Moore is now a Devils defenseman, and Geoff Sanderson was one of my favorite Whalers as a kid. 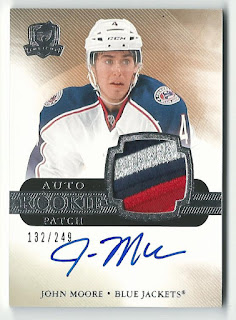 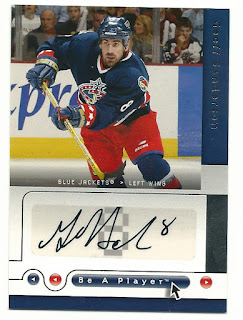 The rest of my Blue Jackets hits, including a Ron Tugnutt Titanium parallel #d/31. Connecticut native Cam Atkinson played against my nephew in high school. 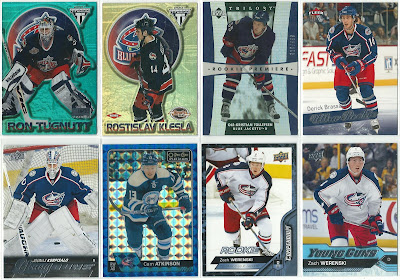 Reds card I'd like to own: A Bowman Chrome Autographed RC of New Jersey native (and Little League hero) Todd Frazier 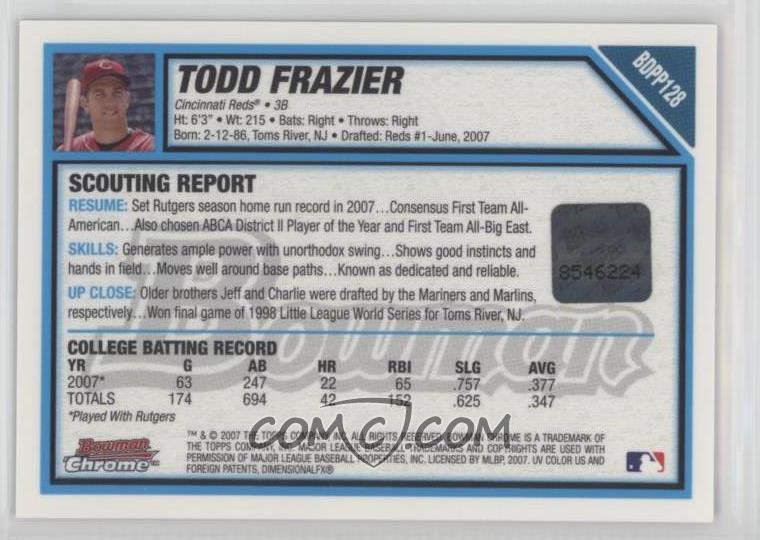 Bengals card I'd like to own: A Devon Still card, or maybe an Anthony Munoz RC

Blue Jackets card I'd like to own: A Cam Atkinson SP Authentic Autographed Future Watch RC


In my previous SCT post I used St. Patrick's Day as an excuse to post a pic of a flame-haired actress, and today I'll do the same because Cincinnati...Reds...red-heads?  I dunno. 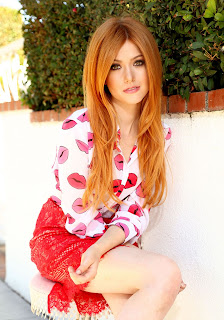 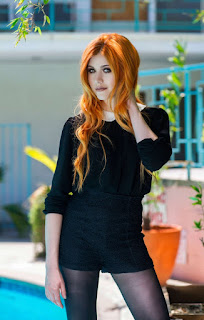 I promise this won't be part of every tour stop...unless there is a legitimate excuse ;-)