Welcome to the second half of Ohio week..today the tour bus pulls into Cleveland.

Cleveland has three pro sports teams - the Indians, the Browns, and the Cavaliers. 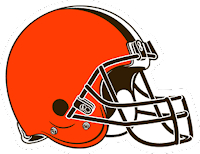 The Indians were one run away from winning the World Series in 1997 and 2016. The Browns are one of only four NFL franchises never to have played in a Super Bowl. 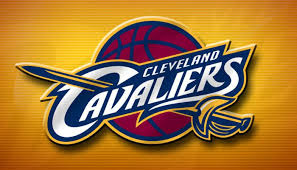 In 2016 the Cavaliers defeated Golden State in the NBA Finals, bringing the first championship to "Believeland" since Jim Brown carried the Browns to the 1964 NFL title. 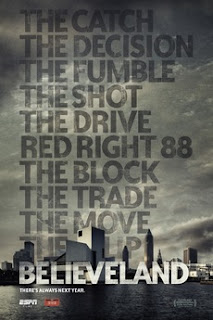 The Cavs and Warriors have faced off in each of the last three Finals, and both teams are powerful but vulnerable this season.

Billy Kingsley's cousin Kevin Love has recently gone public about his battle with anxiety. Head coach Tyronn Lue just took a leave of absence from the team, and the whole city is on edge over the pending free agency of the biggest star in the game, Akron's own LeBron James. 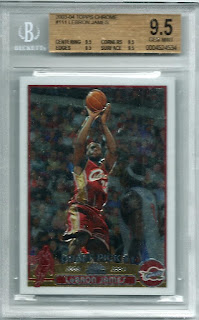 This is something you might not see again on the Sports Card Tour: my best card representing a city (with more than one team) is a basketball card. I bought this on eBay after LeBron won his second championship in Miami; it was the only Cavs card of King James in my collection - until Billy hooked me up with some of these: 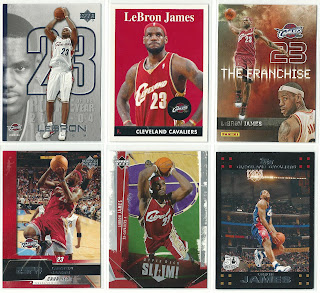 The Franchise insert was actually pulled from a basketball repack I bought at Target, at the beginning of my basketball card collecting renaissance. I think I got the Topps '58 insert on COMC.

During the 2015 NBA Finals, Matthew Dellavedova cards were red-hot on COMC (and other places, I'm assuming?) I loved the way Delly played 'D' so I waited for his cards to cool off a bit and then plucked a few off the site. The Hot Signatures auto was $2.65.

I had a Cleveland Browns autographed card in my collection - but it was recently sent to Angus in exchange for the Brett Favre Prilosec set and a sparkly Dustin Pedroia. This Cameron Erving card should be arriving in Canada soon. 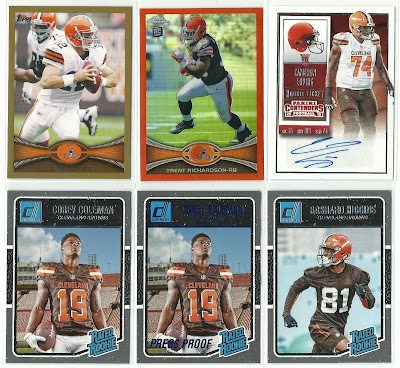 It's actually sort of amazing that I had a Browns card that a Browns super collector didn't have. I really don't have any other Browns cards worth mentioning. 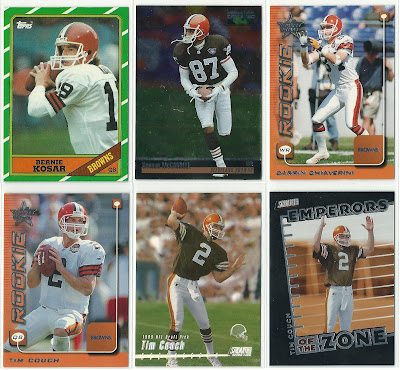 The QB class of '99 rears its ugly head again. Tim Couch couldn't even crack the Packers roster as a backup to Brett Favre. If I ever collect another football card set it will be 1986 Topps; that set is highly underrated IMO.

I actually had a bit of a Bernie Kosar collection for a while..only base cards though. 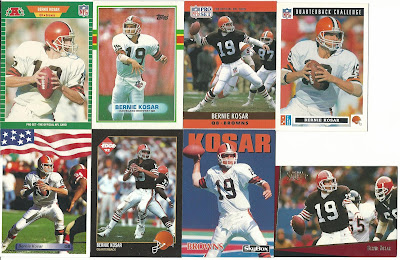 When I was a kid I had a Kosar Starting Lineup figure; I must have taken it into the bath tub or something because part of the paint chipped off and before long I had a "Kosap" figure.

I'll be honest...this is probably my best Browns card: 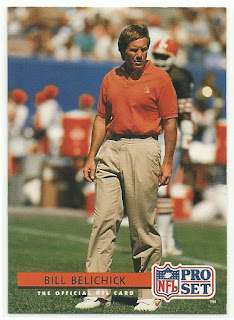 This guy owes us money. I've added him to my Debtor Hall of Shame. 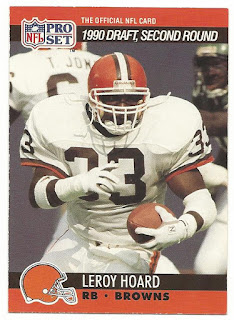 My Indians cards are much more interesting. 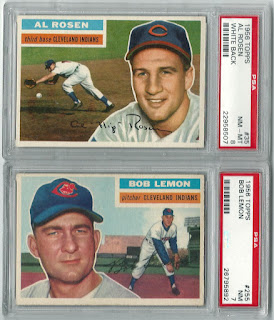 This Al Rosen was the first '56 Topps card I upgraded. Bob Lemon isn't the only Hall of Fame pitcher named Bob in my Tribe... 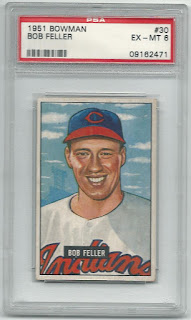 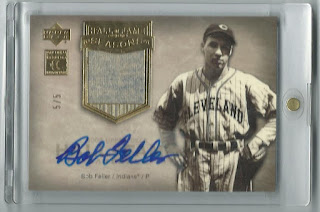 This Feller auto/relic was part of my first official COMC order. It's a stickergraph and a pants swatch, and this set had a lot of low numbered relic variations - which might explain why this was only $40.27 (that and Feller lived to be 92 so he signed a lot of cards.) 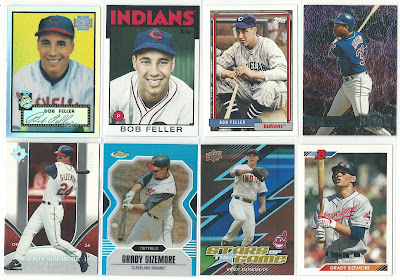 More modern Fellers. "Bullet Bob" is a perfect subject for Archives. Grady Sizemore was another player I used to collect. Still have a bunch of his base cards in my binders.

Some more vintage COMC finds. I had no problem paying $3.65 for the Bobby Avila. At $2.85 I was on the fence about Brodowksi but eventually pulled the trigger. I'm glad I did; the print spots nearly scared me away but they're minuscule in-hand. 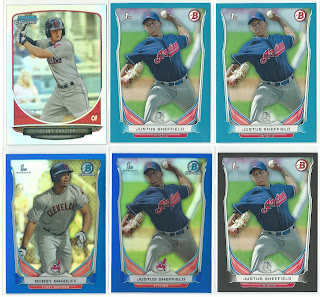 Remnants of my prospect pool. Frazier and Sheffield were traded to the Yankees in the Andrew Miller deal. Boooo! 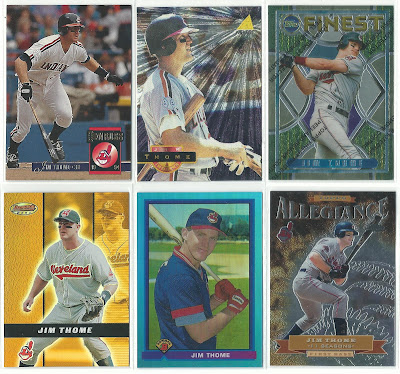 Jim Thome is part of this year's super-sized class of Hall Of Fame inductees. Yesterday it was announced that his plaque will not have the Chief Wahoo logo, per Thome's request. If I were still doing "Final Thoughts" essays I'd address the logo controversy. Maybe. It's a goofy ass logo in need of an update but I can't say I'm offended by it. I'm a proud progressive but I'm not a Native American; let them decide what the new logo should look like.


Indians card I'd like to own: I want a Terry Francona manager card, but I need the Francisco Lindor SP for my 2017 Topps Heritage set build (photo variation preferred.)

Browns card I'd like to own: A Joe Thomas card. I stopped collecting football cards before his HOF-worthy career began, but I really should pick up a card or two of the trail-blazing Brown. 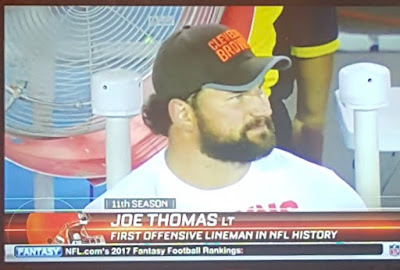 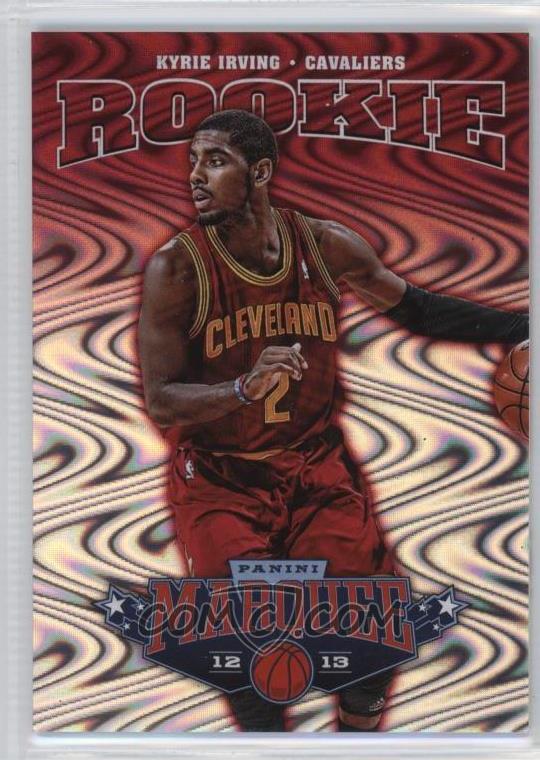 Favorite Browns player: Don't have one. Let's see who they draft with their #1 overall pick.

p.s. The winner of the Cincinnati contest is...Collecting Cutch. Tony Perez is the Reds legend missing from my collection. Congrats, Brian! I'll try to find something to send your way soon.