The Magic became contenders overnight when Shaquille O'Neal arrived in 1992. Shaq's impact on the sports card and memorabilia world was as powerful as his thunderous dunks. Every kid I knew was suddenly ripping open packs of Topps, Upper Deck, and (when we could afford it) Fleer Ultra hoping to pull a Shaq RC. 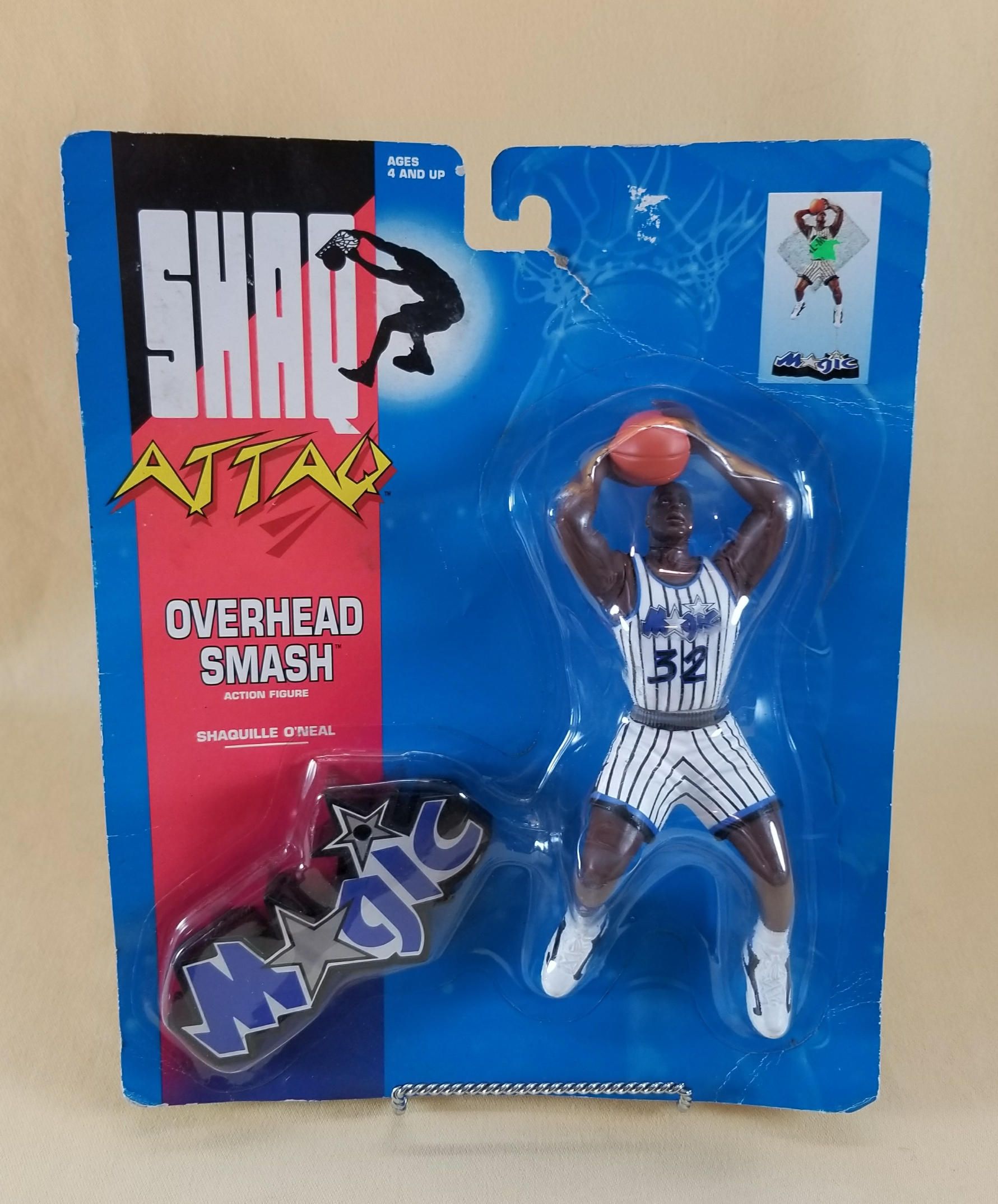 Shaq memorabilia was everywhere, too. I never saw any Starting Lineup figures but I did have this Shaq Attaq figure in my hobby room for a few years. 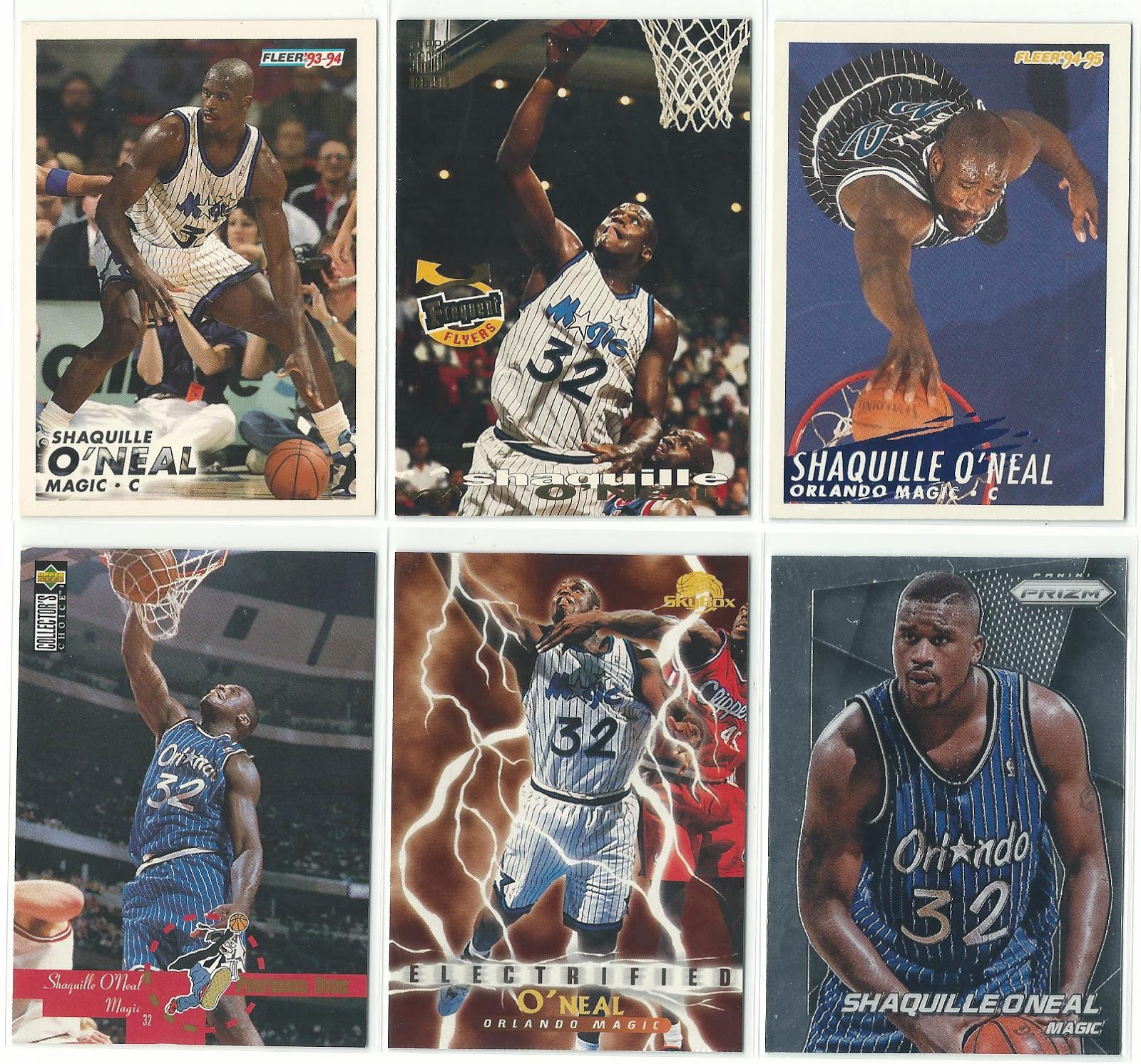 The Shaq craze came at the perfect time for the NBA - and the hobby. Larry Bird and Magic Johnson were nearing the end of their careers. ESPN's flagship highlight show Sportscenter was reaching its peak. Increased competition in trading cards meant more Shaq rookie cards-and more collectors.

When Michael Jordan "retired" from the NBA, Shaq and his new wingman Anfernee Hardaway were ready to take over. 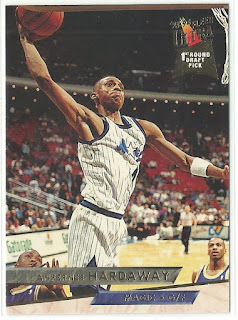 Well, almost. The Magic were swept by Hakeem Olajuwon and the Houston Rockets in the 1995 Finals. Then MJ returned to basketball, thus closing the Magic's title window. Shaq left for the Lakers a year later.

Hardaway was very popular as well, and almost as marketable. (I didn't have a Lil' Penny doll.)

A devastating knee injury in 1997 derailed Hardaway's promising career. He's one of a small group of retired non-Hall of Famers whose cards I keep in my star player box. 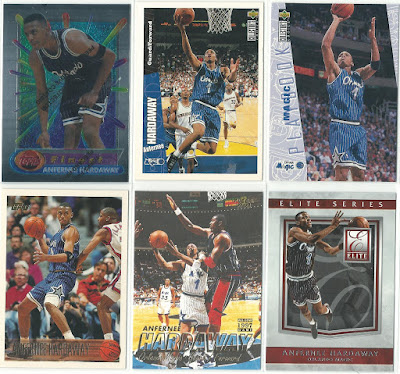 ESPN's 30 for 30 Documentary "This Magic Moment" speculates on what might have happened had Shaq and Penny stayed together in Orlando. When that era ended, Orlando attempted to reload with superstars Grant Hill and Tracy McGrady. 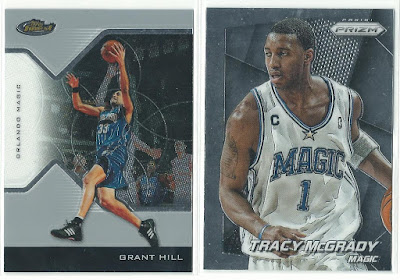 Hill's tenure with the Magic was defined by a chronic ankle injury. McGrady blossomed into a superstar, leading the NBA in scoring in two of his four seasons with the Magic. Even with T-Mac at the top of his game Orlando couldn't get out of the first round of the NBA playoffs. 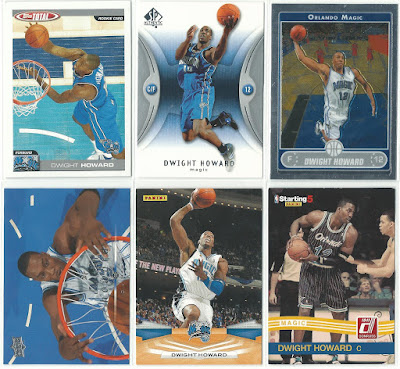 Dwight Howard led the Magic to victory over LeBron James and the Cleveland Cavaliers in the 2009 Eastern Conference Final. Before their date with the Lakers in the championship one of the ladies I worked with asked me if I thought Orlando had a chance. I had absolutely no idea - I hadn't followed basketball in about a decade. She knew her stuff and I had a feeling that there wasn't anyone else in the office who did..so I watched a little bit of the Finals and tried to keep up. 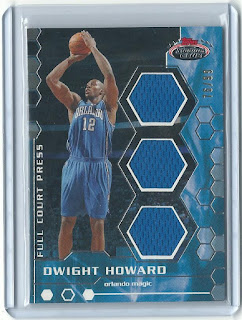 Since Shaq rookie cards have been devalued (to about a dollar on COMC) this Howard relic is my best Orlando Magic card. I had it on my watch list for over a year - the design and colors appealed to me but the price wasn't right and it wasn't a priority. Eventually the price decreased to $5.05 and it came home with the rest of the COMC 500.


I claimed a stack of Orlando/Miami/Memphis cards from Kerry (Cards on Cards) to boost my binder pages, but they haven't arrived yet. Until then here are some other Orlando cards of note: 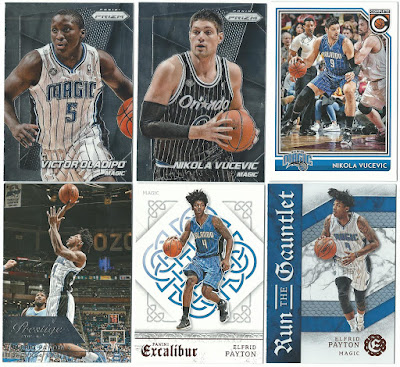 I'm waiting to see what Victor Oladipo does next year before I move him to my star player box. The Elfrid Payton Gauntlet insert is in my 'hits' box. The black throwback jersey is neat (but I preferred the blue jersey shown in Hardaway's Collector's Choice cards.) 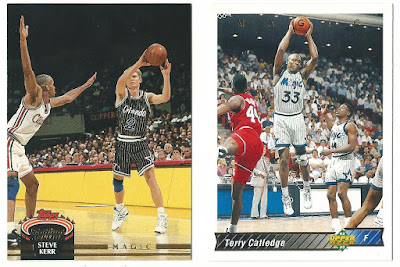 Here's another look at that all-black uniform on Steve Kerr. Wait..Steve Kerr? When did he play for Orlando? I don't remember that at all. I do remember Catledge though. This card fooled at least one of my friends into thinking they pulled a Shaq out of their paq.

And finally some Orlando rookies, including a pair of J.J. Redick (the Chrome isn't a true "RC") 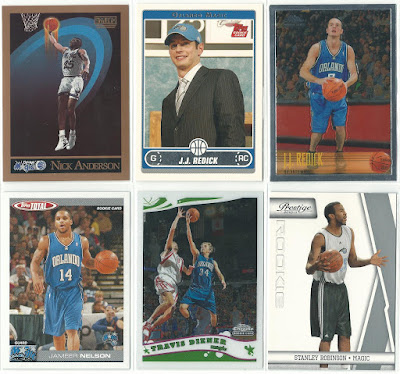 Orlando has had some other pro sports teams throughout the years.


My last Sports Card Tour post featured the Oklahoma City Thunder...for this post we have the WLAF's Orlando Thunder. 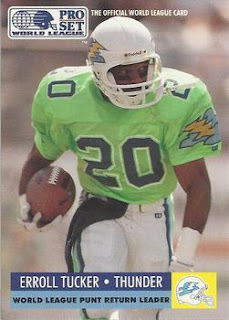 You'll see more of these World League cards in future SCT posts. I used to have a bunch in my collection but only two or three have survived. This isn't one of them; I swiped the image from Trading Card Database.

Here's an Orlando card I'd like to own..particularly because of who is on the other side: 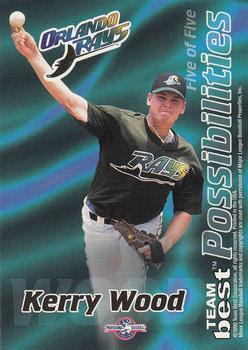 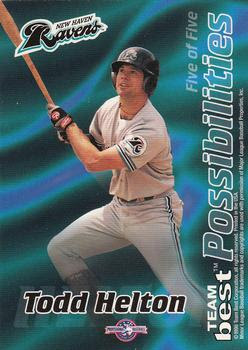 The Orlando (Sun) Rays were a minor-league affiliate of many teams including the Cubs and - not surprisingly - the Rays. I remember Peter Gammons suggesting that the then-Devil Rays merge with the Marlins and play at Walt Disney World as the Orlando Sun Rays.  I thought it was a good idea, but if the minor league O-Rays failed due to low attendance then the major league franchise wouldn't have fared much better.