I thought I had scanned up all of the dime box finds from Sunday's card show, but a few Topps baseball singles got separated from the pack. 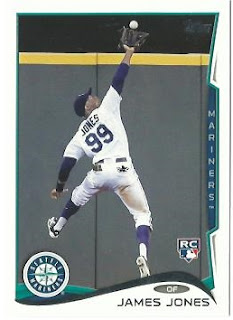 I skipped over most of the recent Topps baseball cards since I've already got them covered in my collection. The exception was Update singles, like this James Jones from 2014. It would have been a nice addition to my post featuring 99 cards of players who wore #99. 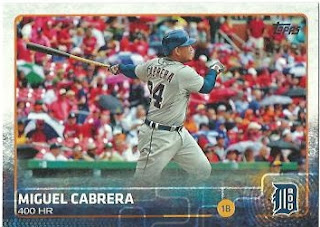 This 2015 Topps Update single salutes Miguel Cabrera for hitting his 400th home run, which he accomplished on May 16, 2015. That was nearly four years ago. You'd think he would have hit his 500th by now. 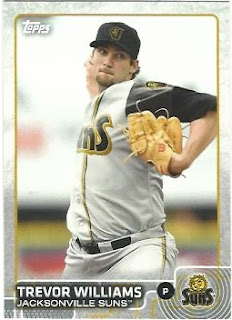 It's always nice to find pre-rookie cards of established major leaguers, and I was excited to find this Trevor Williams card among the four or five 2015 Topps Pro Debut singles in the box. Not just because Williams was second on the Pirates in WAR last season; I started a Trevor PC a few years ago thanks to some impulse COMC shopping. 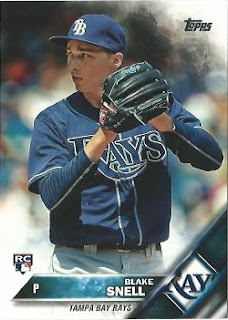 An even more exciting find was this rookie card of Cy Young award winner Blake Snell. The excitement was short lived, however. When I got home I noticed a significant ding on the bottom left corner I thought I had inspected it before buying..apparently not close enough. 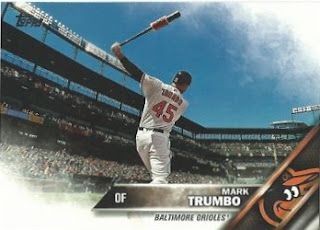 Same for this Mark Trumbo card, also from 2016 Topps Update. I'm less bummed about this one, for obvious reasons. 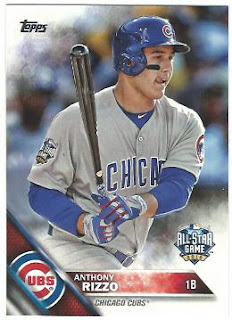 This Anthony Rizzo emerged from the box unblemished. Most collectors despise this set, due to the smoke effect along the corners. It's far too noticeable on the Trumbo but it's not so bad here. 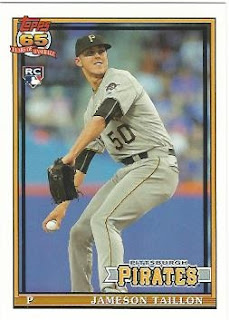 While Trevor Williams was impressive as Pittsburgh's #2 starter, Jameson Taillon led the rotation - and the entire roster - in WAR last year. This Wal-Mart exclusive insert depicts prospects in the Topps set design of their birth year. I have a Kyle Schwarber from this set that might have to be discarded; when cataloging my 2016 baseball cards I noticed a small crease in the left side. 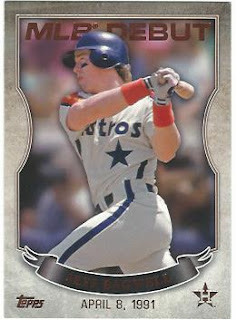 1991 was also the year Hall of Famer Jeff Bagwell made his major league debut. You'll notice that the Astros didn't wait three weeks to call Bags up to the bigs. Probably because there was no BS service time rule but also because the Astros wouldn't have saved anywhere near $30 million by holding him back. 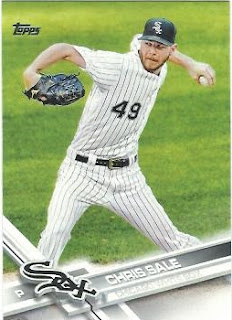 There are very few singles from 2017 flagship that I actually like. Here's one of them.

I'd also like to take this time to point out a sports fan fallacy. Most of us who complain about exorbitant player salaries are not "pro-owner". I don't think I'm alone in saying this, but I'm fine with star players such as Chris Sale getting paid market value. What infuriates me as a Red Sox fan is overspending on the wrong players and/or short-sighted spending.

Boston has already closed the door on Craig Kimbrel because the payroll is maxed out on guys like David Price, Dustin Pedroia, and J.D. Martinez. Losing Sale and/or Xander Bogaerts just to keep Mookie Betts long-term would be a crushing blow. I actually hope JDM opts out after this season. He's a luxury; Sale is a necessity.

This concludes my dime box purchases (I think.)

After finally summoning enough will power to walk away from the dime boxes I looped around to the other side of the room, where I found the 2018 Topps singles I was searching for (dime box guy didn't have any.) 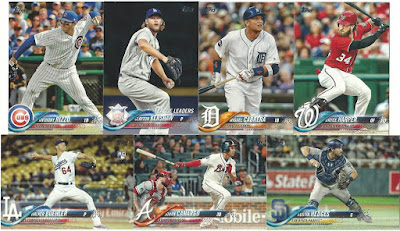 This dealer had a two-row box full of flagship (and another, bigger box of Chrome) As I pulled out my checklist he felt the need to point out that these are not this year's Topps singles. I told him I knew that, and I was looking for '18 as I hadn't completed the set yet.

The cards were out of order and my wife was on her way back from a short shopping trip, so I only picked up 53 new cards. I might have made a bigger dent in my wantlist if I'd had more time.

While I had intended to focus on baseball cards at the baseball card show, this dealer's table was loaded with boxes of football singles. Lots of quality inserts and parallels. I quickly rifled through for some shiny parallels and players I collect; having much more money to spend than time was an odd feeling.

I considered a Dan Marino parallel #d/99 but put it back when I realized that the $7 asking price was more than half of what I'd spent at the dime boxes. However I didn't cheap out completely: 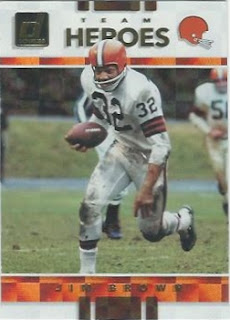 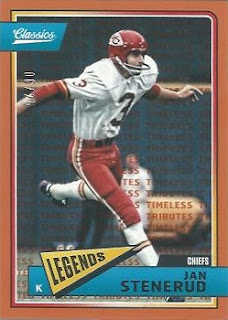 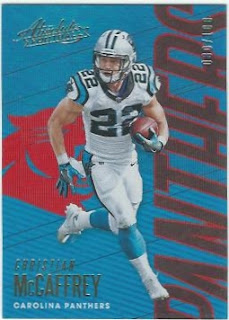 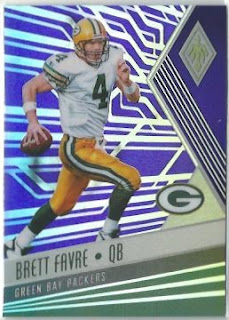 $8 for this Brett Favre purple parallel (#d/149) from 2017 Panini Phoenix (not the best value compared to COMC prices, but still..) 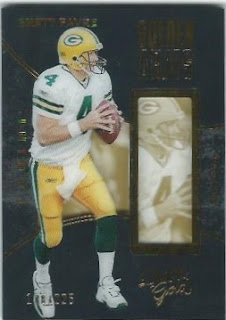 That's $30.50 for the five football cards and a TBD price for the 2018 Topps stack. The dealer only charged me $25 - so basically the McCaffrey and all 53 set fillers were free.

Not only that, the dealer (correctly) surmised that I was a Packers fan and offered me 50% off any Packers cards on the table because, as he said, "I know you're gonna keep them in your PC." Indeed I am. Unfortunately the selection wasn't that great at the front door-facing side of the table. Too much J'Mon Moore and Jonathan Franklin.

I did find one more card to add to my Packers PC: 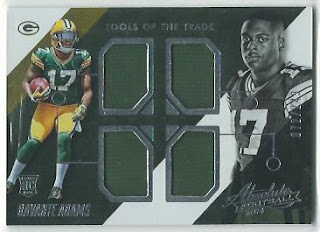 This Davante Adams Tools of the Trade relic was priced at $4, but it only cost me $2 -- which was cheaper than any of the 4 for $10 relics in the first dealer's box.

Overall I spent a mere $40 on over 250 cards, some of which will be headed out to bloggers in the near future.  Didn't get any high-value cards, but it was a lot of fun to search through all of the boxes on both tables and find so many neat cards.


Thanks for reading this three-part recap!