This is going to be a long post with a lot of scans - but I'm planning a series of very short posts with 1-2 scans and few words to even things out.. 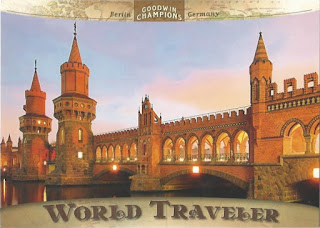 I've been feverishly working on COMC challenges all year in an attempt to earn as many "free" cards as possible and overcompensate for the four months in 2018 that I struggled with a shitty internet connection. The Spring Cleaning sale starts tomorrow, and part of the reason why I had my 100-card batch shipped to me in April rather than wait until December was so that I could add that $5 credit to my bank in time for the sale. 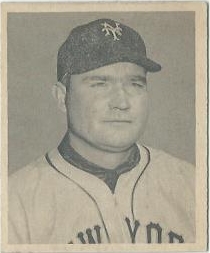 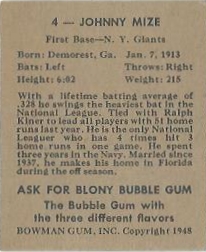 Some of the cards in this order have been discussed before, such as the Johnny Mize Bowman RC above and the Jim Taylor 1961 Topps below. Mize looks fantastic in hand. However the flaws on the Taylor card (specifically the thumb-shaped crease by his elbow) were only visible to me once it arrived.

Buying ungraded vintage on COMC has been a mixed bag for me, but overall I've had a lot more hits than misses.

This Tom Sturdivant ($1.44) would be a candidate for grading if I still submitted cards to PSA; they've been working on my order for months and my subscription expired in the mean time.

Johnny Kucks ($2.38) was my first card purchase of 2019. The bottom right corner looked dinged on COMC but it's barely noticeable in hand.

One morning before I got ready for work, I caught a sale that started at 8 a.m. and jumped on this Brooks Lawrence card for $1.25. Even if I had time to examine it more closely I doubt I would have seen the faint crease extending from the left edge to the bill of his cap.

That seller had a bunch of Kurt Warner cards available, so I bought this Impeccable base card for $0.75. You'll see more high-end base (and another Warner card) later in this post.

Once I'd earned some more challenge credit I went back to that port and snagged this Sandy Amoros for $1.25 even though I already have a graded copy.

Some other set fillers I needed. I'm gonna have to start trading for these 2017 Topps Heritage inserts. Getting tired of paying 60 cents or more - and these were the cheapest needs I found. 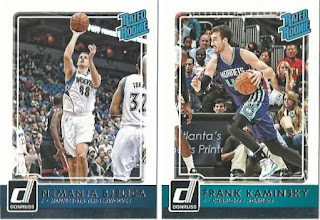 I only need 22 cards to finish the 2015-16 Donruss set. Of course they're all rookies - including Kristaps Porzingis, Devin Booker..and Nikola Jokic :/

I'm now at over 50% completion of the 30-card Exquisite base set thanks to this Shane Doan ($2.65). Hoping to add one more card tomorrow, depending on the sale price.

Every other high-end/low-numbered base card in this batch cost less than Doaner here, including Drew Brees ($1.65), Eric Dickerson ($1.62)...

I'd love to crack open a box of Panini Immaculate one day, but it's hard to justify spending $300+ when the singles are so cheap on the secondary market. This Terrell Suggs relic (#d/55) cost just $2.50: 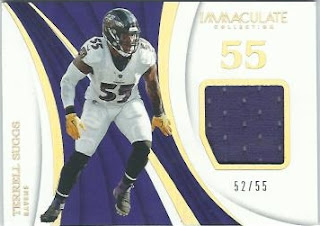 I've discussed these two Black Sox-era greats on my blog before, but the Joe Jackson card has an interesting story.

I bought this card last year, and didn't have any inventory for Black Friday so I put it up for sale and made a small profit...

Then I bought it back for $1.52. In the same transaction, I bought an Art Monk Prizm:

Perhaps I'll start collecting Monk cards again. I did trade for a few on TCDB, with varying results.

Panini Classics was well-represented in this batch. (BTW I scanned each card individually in case I decide to upload them to TCDB) Dickerson was the most expensive of these at $1.30.

I couldn't pass up this James Jones Five Star base card for just $0.52. Many other Packers were purchased, but I should move on to other sports or this post will take all day.

Over a dozen Devils cards were included in this order. I won't waste your time on the 27-cent singles so here's a pair of rookie goalie MacKenzie Blackwood, including his Upper Deck RC ($3.40) The Game-Dated moments card honors his back-to-back shutouts; I was at the first one but not the second.

Pro tip: don't buy the Game Dated cards direct from Upper Deck. I learned that lesson the hard way when I bought Nico Hischier's very first card for $4.99. The Taylor Hall cost $0.75 on COMC, which has the Hischier available for $1.40 (and probably less than that this week)

Also I should have checked my collection before paying $0.53 for an extra SPx single. (it's going in the prize pile.)

I hadn't planned on buying this Brian Boyle relic for $1.15..but it's event-used! Not a photo shoot!

More puck purchases for my PC including a Joey Anderson auto ($1.90), some Conn-tent with Columbus sniper Cam Atkinson ($0.99) and his playoff opponent Charlie McAvoy ($0.65)

An article about Michael Rasmussen's potential led me to pick up his YG for $2. Marcus Petterson was traded to the Penguins mid-season so I'm betting 50 cents that he'll rack up some power play stats playing with Crosby, Malkin, Kessel, & co. 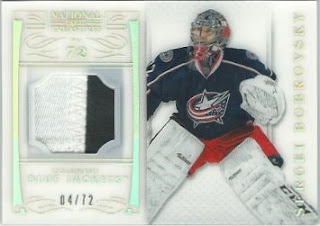 This Sergei Bobrovsky National Treasures patch is thick. I want to get more cards from this set but I doubt I'll find another decent example for $2.85.

When I committed myself to buying cards on COMC exclusively with challenge credit I found it hard to resist filling my cart with cheap singles. Instant gratification and all. Aside from Johhny Mize ($24.25) and Jim Taylor ($9.07) I didn't get any cards over $8.

The Bobrovsky was the 12th-most expensive card out of the 100 I had shipped. Just ahead of it were a pair of cards that don't fit my collection, but I couldn't pass up for the price. 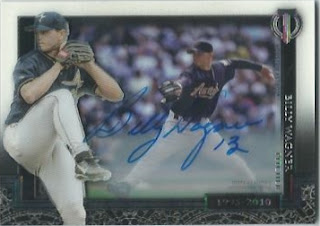 I was amazed that this Billy Wagner Topps Tribute auto cost only $2.95. Not only is he a solid HOF candidate but I imagine that some poor sap bought a box of this for $200+ and this was their hit. 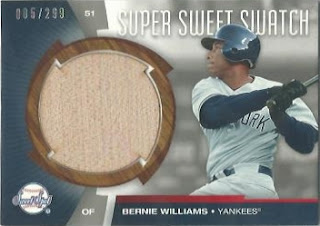 Why did I buy this Bernie Williams bat card for $3.05? Tradebait. And because I like jumbo bat relics. If I do let this one go, it won't be to some passerby who claimed the card in a contest and never came back.

Even Red Sox fans are turning on Dustin Pedroia but I'm staying loyal. Hell, my favorite hockey player is bros with a guy who overthrew our democracy. Pedey's gonna have to do a lot more than get hurt a few times to lose my support. 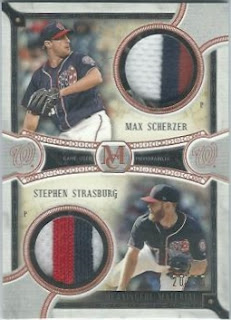 Museum Collection relics are always a good value on COMC. The Pedroia was just $4.50 and I was willing to pay $7+ for this Max Scherzer/Stephen Strasburg dual patch-if I'd had the credit at the time. Lucky for me the price dropped to $6.16 and I grabbed it. 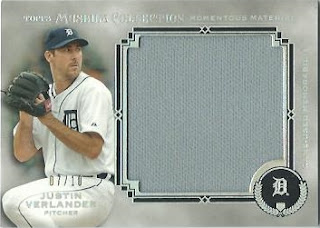 And finally my most expensive modern card purchase: a 2013 Museum Collection jumbo relic of future HOFer Justin Verlander. I was pretty psyched to add this to my cart for only $7.75.

Again, none of these cards cost real money. And I did get a lot of bargains. But just for fun/torture, let's see what single card I could have acquired if I'd saved every cent I spent on this order - which came to $156.61 including shipping. 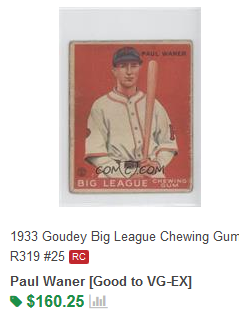 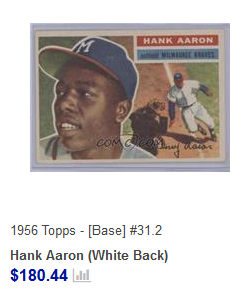 I might have made enough for the Aaron by now and if not, it might be on sale soon. Oh well.


Before I end this post here's a quick look at the standings in my Stanley Cup Contest:

Just because the Sharks are the only claimed team remaining doesn't mean Fuji is definitely going to win the mailer full of hockey cards. But he's got the most chances (why didn't anyone pick the Bruins?!? lol) And don't forget, I'm having a second random drawing for everyone listed above.


Are you planning to shop on COMC during their Spring Cleaning Sale?