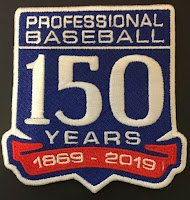 Major League Baseball is celebrating 150 years of professional baseball. All 30 franchises have over two decades of history and so I'm creating an All-Time Team series. Every day in September, The Collector will list the best players by position in every MLB team's history.

The All-Time Teams will mimic a real 25-man roster: five starting pitchers, six relief pitchers, two catchers, six infielders, five outfielders, and one designated hitter. Each team will also have a (non-playing) manager.
Players can only represent one franchise. I set a minimum of four years with one team to qualify for an All-Time Team and prioritized the franchise with whom the player served the most seasons - though that was not always feasible.

Also I adhered to the player's natural position unless it was absolutely necessary to move him to a less familiar spot. This will explain why there are journeyman relievers ahead of some Hall of Fame starting pitchers.

All 30 rosters are set. I spent hours scrolling through stats on baseball-reference.com attempting to be as accurate as possible without agonizing over each roster decision.

Throughout this process I found that there were many great players who couldn't fit on a team for one reason or another. Many were 19th-century greats whose primary team ceased to exist over a hundred years ago. Some recent stars were backlogged at a strong position or didn't play long enough with one franchise.

Since these players don't have a home on one of the 30 MLB All-Time Teams, let's call them the Barnstormers. Here's their starting lineup (click on each name for their baseball-reference page.)

Leading off for the Barnstormers.. the Center Fielder.. Kenny Lofton

One of the most electrifying players of the 1990's, Kenny Lofton led the league in stolen bases five consecutive seasons from 1992-1996. The six-time All-Star and four-time Gold Glove award winner batted an even .300 over ten seasons with the Indians. Lofton's career WAR of 68.3 is ninth all-time among center fielders; every eligible player ahead of him on the list has been enshrined in Cooperstown.

Batting second for the 'Stormers.. the Second Baseman.. Ross Barnes

Ross Barnes is the first of many 19th-century players on this team who played for a long-defunct franchise. Though Barnes played less than 500 games more than a century ago, his numbers are staggering when stretched out over a current 162-game schedule: 227 runs, 279 hits, and a .360 batting average. The back of this card declares him "the most dominant baseball player of his time, and perhaps of all-time." Any celebration of 150 years of baseball should include 1870s stars such as Barnes.

Dan Brouthers was a standout hitter for many forgotten franchises, including the Buffalo Bisons and Detroit Wolverines. The seven-time slugging champion boasts a career batting average of .342 - good for ninth on the all-time list - and his career OPS+ of 171 is eighth all-time, just behind Mickey Mantle. "Big Dan" had speed and power. He led his league in doubles three times, triples once, home runs twice and stole 30 or more bases in a season (at least) five times. Also, he's buried in Billy's hometown.

Every team gets a DH and the Barnstormers got themselves a great one. Jason Giambi couldn't claim a spot on the Athletics or Yankees All-Time Teams, but his impeccable power and keen eye should not be overlooked. The 2000 AL MVP led his league in walks four times and on-base percentage three times. Giambi's 440 career home runs ranks him 43rd on the all-time list and first on the Barnstormers by a country mile. His former manager in New York also has a spot in this lineup.

Our resident Guy Named Gav knows all about Cravath. The first great slugger of the dead-ball era, Gavvy led the majors in home runs four times and slugged an impressive .489 over his nine years with the Phillies. All but two of Cravath's 119 home runs were hit after his 31st birthday, yet he was the active career leader until Babe Ruth came along. His 151 OPS+ is seventh all-time among right fielders. The Phillies have an abundance of 19th-century outfield greats, and "Cactus" just missed the cut as a result.

Joe Torre is here in part because I couldn't find the right fit for him. Yankees manager? He's blocked by at least one other Hall of Famer. Cardinals third baseman? No room there, either. Braves catcher? Perhaps, but they've had some very good ones. Baseball-reference has Torre listed under First Basemen; his career WAR of 57.6 is tied for 22nd at that position with Hank Greenberg. The 1971 NL MVP would make an ideal player/manager for the Barnstormers since this non-franchise has no managerial history.

Jesse Burkett batted an astounding .355 over eight seasons for the long-defunct Cleveland Spiders in the 1890s. Burkett hit over .400 in back-to-back seasons, leading the majors in 1895 and 1896. The Hall of Famer walked more than twice as often as he struck out, and his career runs scored total of 1,720 is 26th all-time. For a team of misfits and leftovers, Jesse Burkett is a heck of a player to have in the bottom third of the order.

Batting eighth.. the Catcher.. Thurman Munson
Thurman Munson would be a starting catcher for at least a dozen All-Time teams. However the Yankees have two Hall of Fame catchers blocking him. In just nine full seasons Munson won three Gold Gloves, AL Rookie of the Year, AL MVP, and made seven all-star teams. His 46.1 career WAR ranks 16th all-time among catchers and just three players ahead of him are not in the Hall of Fame. The Yankees' captain hit .357 over 30 career playoff games and posted three consecutive seasons of 100+ RBI from 1975-1977.

Hughie Jennings batted an eye-popping .359 over seven seasons with the Baltimore Orioles - of the National League. Since that's a long-defunct club "Ee-yah" finds himself starting on this team (not that he would have bumped Cal Ripken out anyhow.) Jennings led the NL in WAR four consecutive seasons from 1895-1898, and he was hit by a pitch more times than any player in major league history - two more times than Craig Biggio. Jennings' 2013 Panini Cooperstown card, his most recent single, commemorates that feat.

The Starting Pitcher for the Barnstormers.. Tim Keefe

Tim Keefe was an outstanding 19th-century starter primarily with the Giants. From 1883 to 1888 Keefe led his league in ERA twice, strikeouts twice, and WHIP three times. In the 1888 championship, the Hall of Fame hurler won all four of his starts and allowed just two earned runs across 35 innings. Keefe's 342 career wins (for those of of you who still value wins) is tenth all-time and first on this team of unaffiliated stars. The only reason he's not on the Giants' All-Time Team is their incredible starting pitcher depth.

Now let's take a look at the Barnstormers' bench and bullpen:

Bresnahan posted a .403 on-base percentage and a 139 OPS+ over seven seasons with the Giants. Clark compiled a .303 batting average and 56.5 WAR over his 15-year career. Gordon hit 20 or more home runs in seven of his eleven seasons. O'Doul won two batting titles and his lifetime .349 average is the fourth-highest in major league history. Keeler colelcted 200+ hits in seven consecutive seasons and hit an incredible .424 for the NL's Orioles in 1897.

Radbourn won 310 games over just eleven seasons, boosted by an unbelievale 1884 season in which he won 60 of his 73 starts, struck out 441 batters, and posted a 1.38 ERA - for a 19.1 WAR. Hudson made four All-Star teams and finished top-4 in Cy Young voting three times. "Newk" won Rookie of the Year, Cy Young, and MVP honors for the Dodgers - along with a World Series in 1955. McCormick's 76.2 career WAR is the third-highest of any pitcher not enshrined in Cooperstown.

Rhodes made 900 appearances (26th all-time) and posted a 142 ERA+ over five seasons in Seattle. McMahon compiled a 2.96 ERA over 18 seasons. Timlin is eighth on the all-time games pitched list and won four World Series. Wickman earned 267 career saves including a league-leading 45 in 2005. Rodney is 17th all-time with 327 career saves and led the majors with 48 closeouts in 2014. Myers led the league in saves three times and his career total of 347 is 12th-highest in history.

This is a solid 31st team in my opinion. Of course if this were a real team we would need a 32nd franchise to even out the leagues. The bullpen would get pretty thin though.


Please let me know what you think of this format. If there are any tweaks to be made I'll only have a couple days to refine the first two posts before starting my four-day vacation in DC.


I hope to see you here on Sunday for our first All-Time Team, the Arizona Diamondbacks.