Jon left a comment on my birthday post asking if I might have a JBF-style stockpile next year for my 40th birthday. I don't think I could ever do that (wasn't that Wes's farewell to the hobby?) but I did accumulate a solid pile of cards this week: 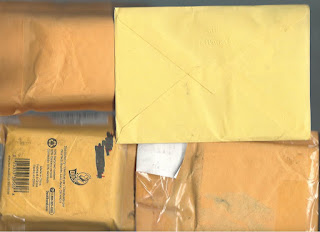 This was just today's mailday; cards and card packages have been filling up my mailbox for the past week. I'm struggling to keep up with all of them. After cataloging and organizing every card in my collection I made too many trades too quickly and I'm actually kind of burnt out. Not sick of the hobby or anything, but I'm mentally fatigued by the volume of cards coming and going.

The Legend of Shoeboxes sent me a well-traveled envelope and I was very happy to receive it. But I still haven't cataloged every card into my TCDB collection, I haven't scanned a single one, and even though I bought a new binder and 9-pocket pages for all these new cards they're still in random piles on my card table.

This hobby is so time consuming!

Perhaps the idea of leaving the hobby on my 40th birthday with a grand finale isn't so bad. I'll never be able to walk away for more than a week or two, but if I did have that kind of commitment.. 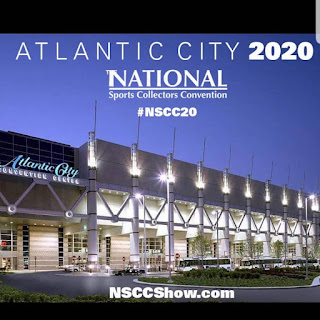 ..spending a few hundred bucks at the National would be a good way to go out. It's tempting to scratch my Cooperstown plans and do AC instead. Look at this list of potential inductees: 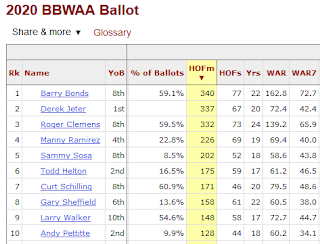 I say this as someone who once cheered for half of these guys: yuck!

It would take me way too long to scan and discuss every card from my birthday-adjacent haul - especially if I'm including trades and purchases. So here's a quick highlight of each package: 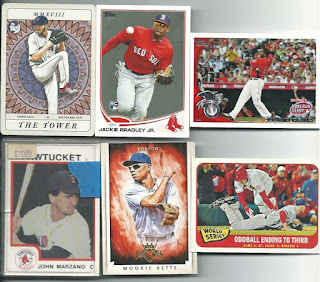 Some of the eighty-plus Red Sox cards Shane stuffed in the in the Well-Traveled Envelope, including a 1987 ProCards Pawtucket team set. Nice touch from the RI guy; does that mean I should send a Norwich Navigators team set to Shane? 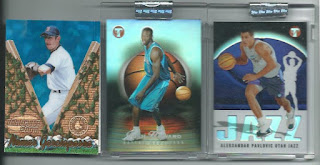 I sent Dennis some Tigers from the surplus box and, as always, his return fire packed a much stronger punch: a handful of Red Sox and a pair of Pristine refractors. Very nice! 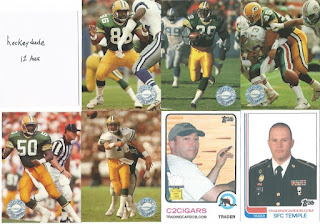 More Packers freebies from the TCDB community. Thank you for your service - and your sports cards. 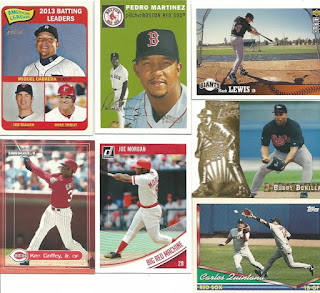 Nachos Grande offered up a nice stack of cards to anyone who could cross a card off his wantlist. Luckily I had three cards for him - and I got thirteen in return. Thanks, Chris!

I sent some Mets cards to TCDB user The_Sandlot in exchange for a bunch of Big League, a neat Robin Roberts insert I've never seen before, and a Brett Favre Legendary Contenders. But wait! This Favre is a gold parallel #d/199. I had only asked for the 'base' Brett. :O

The thickest mailer pictured at the top comes courtesy of TCDB user BigOinPA. This is my second trade with Tom, and I'm happy I could get this one hammered out before my self-imposed trading freeze. In exchange for 64 surplus set fillers I asked for 46 baseball and hockey cards - the former were also flagship set fillers, so I'll show off the latter: 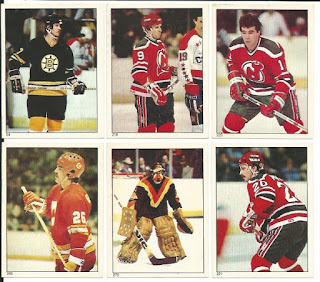 Stickers! These are from the 1983-84 O-Pee-Chee album. I got another Devil(Carol Vadnais) but that one appears to have been peeled, wrinkled, and re-stuck. Oh well. 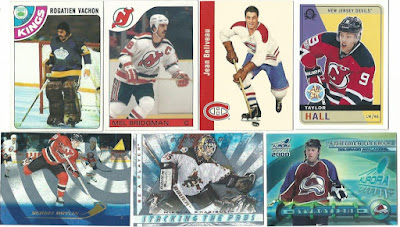 The Vachon and Bridgman are Topps issues, and they're both in nice shape. Not as nice as those shiny inserts though!

A trio of HOFers capped off by a shiny Shanny. Turning 2018 Topps dupes into these beauties is worth all the time spent on cataloging, pulling, packing, and shipping. I'd make these kinds of deals all day long if I could.

While I'm not happy about being a year older I sure can't complain about all the cardboard loot that has come my way recently (along with birthday cash that paid for even more cardboard loot!)