SLU - The Lost Years (a 12 Days of Christmas preview)

This December, The Collector will be celebrating Christmas with a look at some of my all-time favorite toys, games, and gifts. Included in the series will be sports action figures such as McFarlane SportsPicks and Kenner Starting Lineup. I wrote a post about SLU figures in general a few years ago and my 12DOC post(s) will expand on my experiences collecting them as a kid. 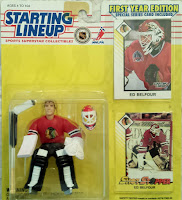 In the meantime, I've been working on something adjacent for years. It always fascinated me that Kenner produced MLB, NFL, and NBA figures starting in 1988. However NHL figures were not produced until 1993. (The 1989 NBA "set" is another topic I'd love to tackle someday.)

I thought we could fill in the gaps with a mock checklist of figures from every team from 1988-1992. Since we can't create custom figures, I've enlisted the help of Gavin to create some custom cards for each "lost" year of Kenner SLUs.


In 1988, Kenner produced figures for 132 MLB players, 137 NFL players, and 85 NBA players. (h/t startinglineupfigures.com) Hockey isn't nearly as popular as those sports in the United States, and that was also true thirty years ago. That being said, one third of the 21 NHL teams at the time were based in Canada - and the top teams and players of the mid-late 1980's were Canadian as well. And so our checklist will be roughly the size of the 1988 NBA series - 80 players. Here they are:

I would assume that the Gretzky figure would have been re-painted in Kings colors once the trade went down, but the card would be left as shown. Also I tried to include every team's top players but some lesser names were left out (such as Mike Bullard) if I didn't think they were "collectible" enough.