On Christmas Eve 1992, my mom and I stopped by my sister's apartment. Her boys were little - the oldest had just turned six - and maybe there was a visit from Santa Claus that she wanted us to be a part of, I don't remember. All I know is that my sister gave me my gift a day early, for a very good reason: 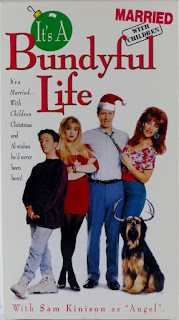 She wanted me to have the Married... With Children Christmas special in time for Christmas! I had first started watching the Bundys before I was allowed to - Mom would not let me watch when I was 10, but by the time I turned 12 she gave in.

To put that in perspective, my wife does not like our 10 year-old daughter watching The Simpsons or Bob's Burgers. Personally I think most Simpsons episodes are harmless and I only let her watch PG-rated eps of Bob's Burgers (when mommy isn't home  ;P )

That Christmas morning I started a tradition - I'd wake up around 7 a.m., throw on pajamas or sweats or whatever, and open gifts with Mom. That would take about an hour as she almost always bought me 17-25 presents (I counted.)  By 8 a.m. Mom would be ready for her coffee and breakfast, so I popped in It's A Bundyful Life and watched it until my aunt visited. Once she saw what I was watching, she'd hasten her walk to the kitchen.

I didn't always understand what Al was going through and some of the dirty jokes were over my head when I was 12. (David Faustino began playing Bud at that same age, and he didn't get the jokes, either.) But I kept watching new episodes every Sunday, and I kept watching this episode every Christmas morning.

As I mentioned before, Christina Applegate was one of my first celebrity crushes. I had planned to do a BCA post featuring Christina, Julia Louis-Dreyfus, Angelina Jolie, and another Celebrity Crush champion, Taryn Southern. Perhaps next year.

In case you were wondering, Anna Kendrick went wire-to-wire and kept the CCC belt throughout 2019. Her only challenger this year was :checks notes: ..Riley Voelkel.

It's A Bundyful Life follows the same plot line as the classic film It's A Wonderful Life, in which a guardian angel shows our protagonist what life would be like if he were never born:


Al's guardian angel is played by comedian Sam Kinison. Naturally, his assignment backfires as the Bundys - er, Jablonskys, are much better off without Al.

Interestingly, Ted McGinley plays Peg's would-be husband Norman Jablonsky in this episode. The show runners must have been impressed with McGinley's performance since they kept him on the show full-time as Marcy's second husband, Jefferson D'Arcy.


After a few years of watching this episode every Christmas morning I knew nearly all of the dialogue and began to recite it aloud. That's when I realized that I should probably give it a rest for a while. I haven't seen it in quite some time and if I can find a way to watch it again this Christmas I'm going to try. I do have a few seasons of Married... on DVD and this might be one of them, but I have no idea what I did with my VHS copy.


Do you have a favorite Christmas episode of a TV show you watch/watched?