Today is a big day of gift giving here at The Collector. My daughter's birthday party is this afternoon and before the party starts I'm going to the post office to mail a pile of packages for my card collecting friends (and one eBay buyer.) A handful of cards I planned to send out were being held at COMC and, since they included a Secret Santa gift, I had to request shipping on these the week before Black Friday.

It's a relief to finally be able to send these gifts out because I received my Secret Santa gift on Monday. CaptKirk42 of the blog Curly W Cards drew my name out of the hat and sent three wrapped packages (I'll save the largest one for a future post..) 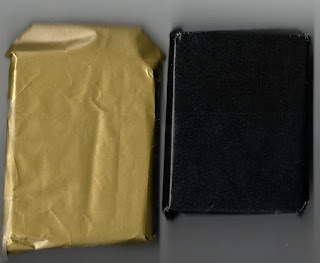 Before opening these two packages I'd assumed that one would be a retail fat pack of new product like 2019 Topps Update or something and the other would be single cards. 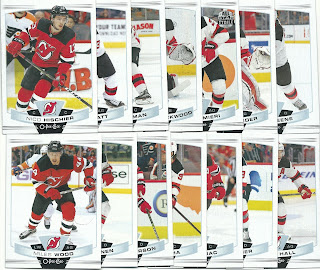 I assumed incorrectly. Both packages from Kirk were loaded with cards from all of my favorite teams, including the Devils team set from 2019-20 O-Pee-Chee.. 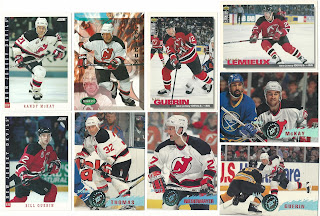 ..and Devils cards from back in the days when they actually won a few games. 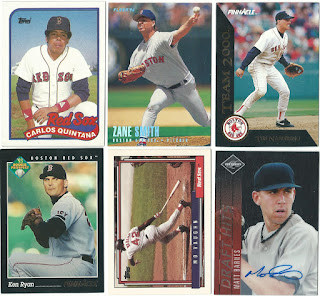 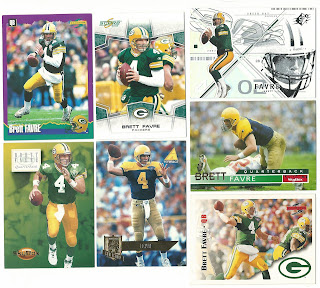 And a bounty of Brett Favre cards! 25 in all! I haven't had time to check how many are new to my collection, but my guess is that three or four of these were needs. 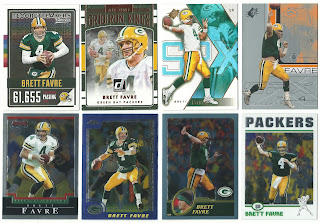 These Chrome cards are fantastic! I remember buying as much 2004 Bowman Chrome as I could find that year - which wasn't more than a few packs here and there. 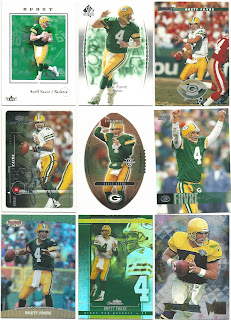 So many cool cards here, including the 2004 Bowman's Best and Fleer Showcase. I definitely did not have that Standing O football in the middle. 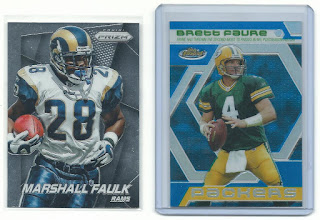 Kirk also sent a Brett Favre Starting Lineup figure, which is timely given my recent posts.

Brett Favre is by far my largest player collection, but the only PC I prioritize ahead of him is.. 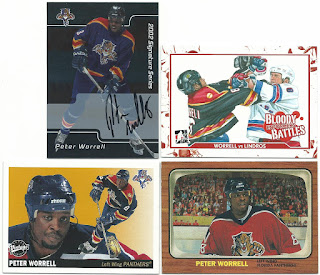 I had gone months without adding any new Peter Worrell cards until recently, and it means a lot more when they're part of a care package. Kirk, thank you so much for this very thoughful Secret Santa gift!

Here are some of the hand-picked singles I received in the COMC shipment. Normally I would make this a second post but there's so much going on I didn't want to drag it out. 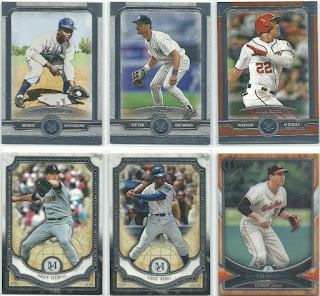 I prioritized thicker cards since I have an abundance of thick top loaders sitting in my closet. The Clemens Museum Collection was $0.37 - cheaper than a flagship set filler of a nondescript Braves reliever! The Banks Museum single was $0.46 - cheaper than a Topps Big League set filler of a failed Yankees prospect! The Soto copper parallel was $2.25. 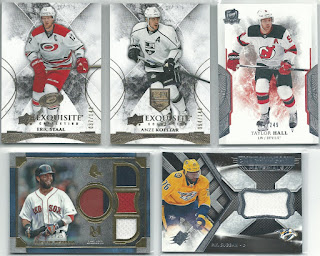 Two more exquisite singles, which I bought previous to the Chara and MacKinnon. Staal cost me $1.44 but if I'd waited until the BF sale I could have grabbed it for under a buck - as I did with the Subban relic. The Pedroia patch was the most expensive item in this order at $6.20. 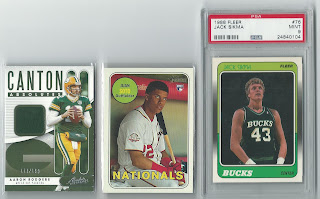 These were the only other cards that cost $4 or more. I was especially thrilled to add an Aaron Rodgers relic to my Packers PC for just $4.75. The Soto Heritage RC cost $4.48. I was busy hunting down his singles during the World Series. If I had the cash to buy high-end prospect autos he's the one guy I'd go "all-in" on right now. 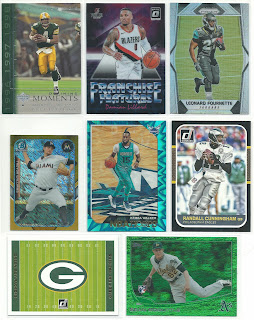 The rest of my keepers, including another Favre. The Green foil at the bottom right is Sean Doolittle. I've wanted an Oakland A's card in that color for a while, and Doolittle is one of a handful of Nationals players I've cheered for recently. I was very happy Kirk's Nationals won the Series this past year. Hopefully they can bring back Steven Strasburg and/or Anthony Rendon to defend their title, but even if they lose a big-name free agent I wouldn't count them out next year ;-)

Thanks for reading and enjoy your weekend!