The Collector's All-Time Teams Series is back after a winter hiatus. Today we'll look at the All-Time roster for the Los Angeles California Anaheim Los Angeles Angels of Anaheim. Or as they're known on Topps cards.. Angels. 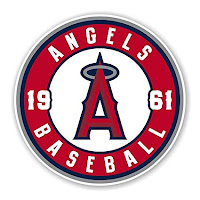 Leading off for the Angels.. the Second Baseman.. Bobby Grich

Bobby Grich ranks 8th all-time among second basemen with a 71.1 career WAR; only one player ahead of him is not in the Hall of Fame. The six-time All-Star and four-time Gold Glove winner hit a career-high 30 home runs for the Angels in 1979, helping the team reach the postseason for the first time. In 1981 Grich led the AL in slugging and OPS+; he shared the league lead in home runs with 22.

The greatest player in Angels history is just 28 years old. Mike Trout has been an All-Star, a Silver Slugger winner and a top-4 finisher in MVP voting in each of his eight full seasons. His career OPS is an even 1.000, and his career WAR of 72.5 places him right in between two of the newest Hall of Famers - behind Larry Walker but ahead of Derek Jeter. The New Jersey native also has 200 career stolen bases, including a league-leading 49 as a rookie in 2012.

Troy Glaus played just seven seasons with the Angels, but made a big impact. The 3rd overall pick in the 1997 draft won two Silver Slugger awards and made four All-Star teams - three for the Angels. Glaus led the AL in home runs with 47 in 2000 and powered the team to its first and only World Series Championship, earning MVP honors with 10 hits and 22 total bases in the 2002 Series. Troy is tied for 12th all-time among third basemen with 320 career homers.

A part-time player with the White Sox, Brian Downing's career took off after a trade to Anaheim before the 1978 season. The "Incredible Hulk" was a strong presence in the Angels' lineup for 13 seasons, helping the Halos reach the playoffs three times. Downing walked more than he struck out and slugged 20+ home runs in six seasons - all of them after age 30. He's in the Angels' all-time top five in most offensive categories.

Garret Anderson played more games than anyone in Angels history. The franchise standard-bearer in hits, runs, doubles, total bases, and RBI represented Anaheim in three All-Star Games and won two Silver Slugger awards. Anderson finished second in Rookie of the Year voting in 1995, the first of six seasons in which he batted .300 or better. His career hit total of 2,529 places him in the top 100 all-time.

Another Rookie of the Year runner-up, Wally Joyner was an All-Star in his freshman season during which he led the Angels in hits, total bases, and RBI. He followed that up with a sensational second season, setting career highs with 34 homers, 117 RBI, and a .528 SLG% in 1987. Though his production declined after that, Joyner's 121 OPS+ is tenth in team history and first among first basemen who played the majority of their careers at the big "A".

An expansion draft pick from the Red Sox in 1960, Jim Fregosi was arguably the Angels' most valuable player through their early years. The six-time All-Star received MVP votes in eight consecutive seasons and slashed .268/.340/.403 in a decade-plus with the team. Fregosi is the Angels' all-time leader in career triples with 70, and his 45.9 WAR is third in franchise annals. After a subpar 1971 season Fregosi was traded to the Mets for four players - including Nolan Ryan.


The oldest of three catching Molina brothers, Bengie Molina was a defense-first backstop for Anaheim over eight seasons. However the two-time Gold Glove winner had some pop in his bat, posting four seasons of double-digit home runs for the Angels and eight overall. Bengie's brother Jose Molina served as his backup for parts of five seasons.

The Starting Pitcher for the Angels.. Frank Tanana

Frank Tanana is fourth among Angels pitchers with 34.2 career WAR and a 3.18 fielding-independent ERA. So why is he the 'ace' of this All-Time Team? Quality over quantity. Starting at age 19, Tanana's eight seasons in Anaheim included three All-Star nods, two top-4 Cy Young finishes, and three seasons of 7+ WAR. He led the majors with 269 strikeouts and a 3.68 K:BB ratio in 1975, then followed that with 261 K's and a league-leading 0.988 WHIP in 1976.

Now let's take a look at the Angels' bench and bullpen:

Boone caught more games for the Phillies, but he's a better option than Buck Rodgers. Erstad is 4th on the team's all-time hits list and won Gold Gloves at two positions. Three designated hitters instead of a true outfielder like Kole Calhoun was a tough call; Baylor's 1979 AL MVP season sealed his spot on this squad. Chone Figgins would be an ideal 26th man for his speed and versatility, but we're sticking with the original roster sizes.

Finley is the franchise leader in WAR, wins, starts, and innings pitched. Consider the five-time All-Star as this rotation's "1A". Weaver started the 2010s with three All-Star nods and three top-5 Cy Young finishes and I completely forgot he was that good. Chance won the 1964 Cy Young award (for both leagues) after posting a 1.65 ERA and 11 shutouts. Lackey beat out Mark Langston for the fifth starter spot based on better control - and his winning performance in Game 7 of the 2002 World Series.

Donnelly was an All-Star in 2003 and posted a 154 ERA+ across five seasons in Anaheim. Shields is second in franchise history with 491 appearances. Harvey saved an AL-leading 46 games for the Halos in 1991. "K-Rod" set a single-season record with 62 saves in 2008. His 437 career saves are fourth all-time. Percival saved 316 games for the Angels and 358 overall. This bullpen has over 1,000 career saves - more than almost any All-Time Team.


Just a reminder that you can find this post and all of the All-Time Teams on the Your City, Your Team tab at the top of this blog. Hope to see you back here for our next All-Time Team, the Los Angeles Dodgers.