Our previous All-Time Team won five World Series in Philadelphia. Today's team has won two titles in the city of brotherly love. Here's the all-time roster for the Philadelphia Phillies: 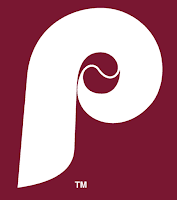 Leading off for the Phillies.. the Center Fielder.. Billy Hamilton

The most prolific base stealer of the 19th century, "Sliding" Billy Hamilton held the all-time record for 80 years. Hamilton led the league in batting average twice, on-base percentage five times, stolen bases five times, walks five times, and runs scored four times. The Hall of Famer holds the single-season record for runs scored with 198 in 1894 and his career batting average, on-base percentage, and stolen base totals are first in Phillies history.

Another standout star of the 1890's, Ed Delahanty batted .346 over his Hall of Fame career, the fifth-highest total in history. A two-time batting champion, "Big Ed" batted over .400 three times including a .410 clip in 1899. He led the majors in OPS and OPS+ four times, slugging percentage five times, doubles four times, and RBI three times. Elected to the Hall of Fame in 1945, Delahanty is the Phillies' all-time leader in triples with 158. He ranks second in team history in batting average and runs scored, and third among position players with a 61.0 WAR.

Michael Jack Schmidt is generally considered the greatest all-around third baseman of all-time. A three-time NL MVP and twelve-time All-Star, Schmidt won ten Gold Gloves, six Silver Slugger awards, and World Series MVP honors for the 1980 champion Phillies. Schmidt slammed 548 home runs in his Hall of Fame career - the most of any third baseman and the 16th-highest total in history. He's the Phillies' franchise leader in several categories including home runs, RBI, total bases, and games played. His 106.8 WAR is first in Phillies history and the highest all-time total among third basemen.

Chuck Klein slashed an astounding .353/.410/.617 at home in his Hall of Fame career. The left-handed slugger took full advantage of the Baker Bowl's short right field dimensions, leading the National League in home runs four times from 1929-1933. Klein is fifth on the Phillies' all-time list with 243 home runs, and holds franchise records for career slugging percentage and OPS. The 1932 NL MVP finished runner-up in 1933, when he led the league in batting average, on-base %, slugging, home runs, RBI, doubles, and hits.

Ryan Howard has the second-most career home runs in Phillies history and four of the team's top six single-season totals. The 2005 NL Rookie of the Year won MVP honors a year later after leading the majors with 58 home runs, 149 RBI, and 383 total bases. This kicked off a four-year span in which Howard slammed 198 home runs and collected 572 RBI, leading the league in the latter category three times. Howard hit three home runs in the Phils' five-game World Series victory over Tampa Bay in 2008 and earned NLCS MVP honors in 2009, posting a 1.457 OPS with two homers and eight RBI against the Dodgers.

Sam Thompson completes the Phillies' 19th-century outfield. In eight full seasons with Philly, Thompson drove in 100+ runs seven times - including a major-league leading 165 RBI in 1895. Thompson led the league in slugging percentage three times, hits three times, and total bases twice in his Hall of Fame career. Several of Thompson's career totals are top-ten in team history: his on-base and slugging percentages are ninth, he's seventh in runs scored, sixth in RBI, and his .334 batting average is fifth among Phillies.

One of the finest all-around second basemen over the last two decades, Chase Utley combined middle-of-the-order power with above-average defense. The six-time All-Star earned four consecutive Silver Slugger awards from 2006-2009, posting three seasons of 30 home runs and three seasons of 100+ RBI in that span. Utley compiled five straight seasons of 7+ WAR, including a 9-WAR season in 2008, and his defensive WAR total is second in franchise history. His overall total of 65.4 WAR is second among Phillies position players and 15th all-time among second basemen, placing him in between Hall of Famers Craig Biggio and Jackie Robinson.

Darren Daulton caught just four full seasons and 965 total games for Philadelphia. However "Dutch" was a standout at the plate and behind it when healthy. The three-time All-Star won a Silver Slugger award in 1992 after leading the NL with 109 RBI. Daulton finished top-10 in MVP voting in '92 and '93, when he played a career-high 147 games and led the NL pennant winners in RBI. He ended his career on top with the Marlins in 1997, after batting .389 in the World Series.

Jimmy Rollins was the Phillies' primary leadoff hitter for 15 seasons, igniting the offense that won five consecutive NL East division crowns, two pennants, and the 2008 World Series. A three-time All-Star and four-time Gold Glove recipient, "J-Roll" won NL MVP honors in 2007. He led the league in triples four times, and his 111 three-base hits places him third in team history. Rollins is first among Phillies with 2,306 hits and 479 doubles, second in games played and stolen bases, and third in runs scored.

The Starting Pitcher for the Phillies.. Steve Carlton

One of the greatest left-handed pitchers of all-time, Steve Carlton ranks fourth in history - and second among southpaws - with 4,136 career strikeouts. A first-ballot Hall of Famer in 1994, "Lefty" won more games than anyone in Phillies history - not including the clinching Game 6 of the 1980 World Series. Carlton won the first of his four Cy Young awards in 1972, posting an incredible 12.5 WAR with a 27-10 record, a 1.97 ERA, and 310 strikeouts for a Phillies team that finished with just 59 wins.


Now let's take a look at the Phillies' bench and bullpen:

Davis led a crowded field of quality catchers with a career .321/.374/.449 slash line. The Phillies have a plethora of outfield options - including two more pre-war players. The only way to field the best possible squad was to bench Allen, a seven-time All-Star and the 1972 AL MVP, since the Phils are thin at most infield positions. Rolen would start at third base for almost any other team. Ashburn led the league in walks and on-base % four times in his Hall of Fame career. Abreu's .303/.416/.513 slash line with the Phillies translates to a 139 OPS+, tied for tenth in team history.

Alexander led the league in wins, innings pitched, and strikeouts every year from 1914-1917. His 1.22 ERA and 0.842 WHIP helped the Phils win the pennant in 1915. Schilling pitched in four World Series with three different teams. Roberts, a seven-time All-Star, has the highest WAR among Philly pitchers and the most innings pitched. Hamels has made four All-Star teams and was named MVP of both the NLCS and the World Series in 2008.  His strikeouts-to-walks and strikeouts per 9 innings ratios are third-highest in team history.

Farrell was an All-Star reliever for the Phillies before becoming an All-Star starter for Houston. Neris is already ninth in team history with 67 saves and has a career 129 ERA+. Madson and Reed each posted a 122 ERA+ over their respective tenures with the Phillies. Bottalico earned 34 saves in back-to-back seasons. McGraw posted a 1.46 ERA for the 1980 World Champions. The top five save totals in Phillies history were posted by pitchers who did not qualify for this roster.


Stay tuned for our next All-Time Team, the Pittsburgh Pirates.