Topps may have forgotten about today's team but The Collector hasn't. Here's the all-time roster for the Texas Rangers: 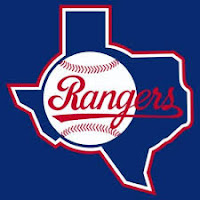 Leading off for the Rangers.. the Second Baseman.. Ian Kinsler

Ian Kinsler has the second-highest stolen base total and fifth-highest WAR total in Texas Rangers history. The four-time All-Star has a career WAR of 55.2, which ranks him ahead of Hall of Fame second basemen Bobby Doerr and Nellie Fox. Kinsler won two Gold Gloves, played in three World Series, and won a ring with the Red Sox in 2018. He posted a dozen seasons of double-digit home runs over his 14-year career, including two seasons of 30+ round-trippers. Kinsler announced his retirement in December, ending his career one hit shy of 2,000.

A mainstay in the Rangers' infield for twelve seasons, Michael Young spent significant time at shortstop, second base, and third base. The seven-time All-Star won a Gold Glove at short in 2008, won a batting title in 2005, and led the majors in hits twice. Young is the Rangers' career leader in hits, runs scored, total bases, doubles, triples, and games played. The lifetime .300 hitter has more career base knocks than Hall of Fame shortstops Alan Trammell and Barry Larkin.

Rafael Palmeiro spent half of his 20-year career in Texas, setting franchise records for offensive WAR and runs created. "Raffy" won three Gold Gloves (including one as a full-time DH) and two Silver Slugger awards from 1997-1999. The four-time All-Star is one of just six players in major league history with 3,000 career hits and 500 career home runs. Palmeiro ranks 13th all-time with 569 round-trippers and 17th all-time with 1,835 RBI (one behind Ken Griffey, Jr.) After returning to the Rangers at age 34, Palmeiro averaged 43 home runs, 122 RBI, and 321 total bases per season from 1999-2003.

The American League's MVP in 1996 and 1998, Juan Gonzalez crushed over 40 home runs in a season five times, leading the majors in 1992 and 1993. "Juan Gone" is the Rangers' all-time leader in home runs, runs batted in, and extra-base hits. His slugging and OPS averages are second to Alex Rodriguez in franchise history and only "A-Rod" collected more total bases in a season for Texas. Gonzalez won six Silver Slugger awards, hit .310 or higher in a season five times, and led the Rangers to their first three division titles in the late 1990s.

Originally signed by the Dodgers as a 15 year-old, Adrian Beltre blossomed into a superstar ten years later, finishing second in NL MVP voting in 2004 after leading the majors with 48 home runs. The all-time leader in RBI by a third baseman, Beltre has the second-most hits, the third-most home runs, and the third-highest WAR of any 'hot corner' regular. His 3,166 hits are 17th all-time among all players. A standout defender, Beltre earned five Gold Gloves (and two Platinum Gloves) to go with his four Silver Slugger awards. In eight seasons with the Rangers Beltre batted .300 or better five times, and his 41.2 WAR with Texas is third-highest in team history.

A superstar slugger for the Senators in the late 1960s, Frank Howard also began his career with the Dodgers, earning NL Rookie of the Year honors in 1960 and a World Series ring in 1963. Howard represented Washington in four All-Star games. The "Capital Punisher" blasted at least 44 home runs each year from 1968-1970, leading the league in home runs and total bases twice in that span. His 246 long balls for the Senators/Rangers franchise is third in team history, and his 153 OPS+ is second only to Alex Rodriguez.

The first overall pick in the 1999 draft, Josh Hamilton was a highly productive hitter when healthy. In a spectacular five-year period beginning in 2008 Hamilton made five All-Star teams, won three Silver Slugger awards, and led the Rangers to back-to-back World Series appearances in 2010 and 2011. In 2010 he was named MVP of the ALCS after a 4-homer, 7-RBI performance against the Yankees and earned league MVP honors after leading the majors in batting average, slugging percentage, and OPS. Hamilton is third on the Rangers' career list in slugging and OPS, and his 134 OPS+ is the fourth-highest in club history.

Ivan Rodriguez began his 21-year career at age 19, handling a pitching staff that included Nolan Ryan. Rodriguez and Ryan are the only two Hall of Famers with a Rangers cap depicted on their plaques. The Rangers' career leader in WAR with an even 50, "Pudge" won 13 Gold Gloves, made 14 All-Star teams, and owns the all-time record for games caught with 2,427. Rodriguez won the American League MVP award in 1999 after setting career highs with 35 home runs, 113 RBI, and 25 stolen bases. He took home six consecutive Silver Slugger awards (seven overall) and led the Marlins to their second World Series title in 2003.

Rusty Greer ranks fourth among Rangers outfielders in WAR with a total of 22.4 over nine seasons with the team. Greer posted double-digit home run totals in each of his first six seasons, topping out at 26 in 1997. He set career highs that year with 42 doubles, a .936 OPS, and 319 total bases. Rusty ranks fourth in Rangers history with a .387 on-base percentage and his .305 batting average ties him with Alex Rodriguez for the team's fourth-highest career mark. His offensive WAR, OPS, runs scored, hits, total bases, RBI, and runs created totals are also top-ten for Texas.

The Starting Pitcher for the Rangers.. Kevin Brown


Kevin Brown pitched just six full seasons for the Rangers, earning the first of his six All-Star accolades in 1992. He led the AL with 21 wins and 265 2/3 innings pitched that season. Brown is fifth on the Rangers' career list in those categories, and his 40 complete games are fourth in team history. He became a Cy Young contender in the National League, leading the league in ERA twice and WHIP twice. The durable right-hander compiled 67.8 WAR over his 19-year career, ranking him ahead of several Hall of Fame pitchers including Roy Halladay and Bob Feller.


Now let's take a look at the Rangers' bench and bullpen:

Sundberg is fourth on the Rangers' all-time list in games played and sixth in WAR. The three-time All-Star won six Gold Gloves with Texas and a World Series in 1985 with the Royals. Andrus has made two All-Star teams and played the second-most games in Texas team history. The franchise leader in stolen bases has a lower slash line and OPS+ than 1st Base options like Pete O'Brien and Mike Epstein, but this lineup has enough thunder. The Rangers are rich in third base options including Harrah and the player he was traded for, Buddy Bell. Corner outfield was another tough call; without a natural center fielder to consider I chose 1974 AL MVP Burroughs over Nelson Cruz, who did most of his damage after leaving the Rangers.

Darvish has the highest strikeouts per 9 innings rate in league history. He whiffed more batters for the Rangers than Nolan Ryan, Fergie Jenkins, and Kevin Brown. Hough leads the franchise in wins, strikeouts, and starts. His 32.6 WAR for Texas is first among pitchers and seventh in franchise history. Rogers made four All-Star teams, won five Gold Gloves, and posted the second-highest WAR of any Rangers pitcher. Finding a fifth starter was difficult; Wilson pitched out of the bullpen for five of his seven seasons with Texas. However his 125 ERA+ (second in team history) was good enough to beat Bobby Witt, who allowed far too many base runners.

Knowles posted a 2.46 ERA over six seasons with the Senators, earning an All-Star spot in 1969. Feliz is fourth among Ranger relievers in saves and won AL Rookie of the Year honors in 2010. Russell, a two-time All-Star, is number two on the team's all-time list in appearances and saves. Cordero is third in both categories and earned three All-Star nods with three different teams.


John Wetteland would have been the Rangers' closer, but I could not bring myself to add him to this roster. I've never excluded a deserving player from any All-Time Team - not racists or cheaters or gamblers - but I guess I'm drawing the line at child molesters.

Unfortunately the pitching-starved Rangers don't have many options to replace him. Lefty Darren Oliver pitched 20 seasons with nine teams - including a decade in Arlington - but his ERA was close to 5. Casey Cox had a better ERA and WHIP than Oliver but he was a negative-WAR player overall. Steve Foucault had four good seasons for Texas. I guess he'll get the last spot.

The road to the finish line goes through Canada. Stay tuned for the Toronto Blue Jays.


Thanks for reading, and take care out there!