I'm getting my second Covid shot this afternoon, right after I get out of work. I plan to take tomorrow off, even if I don't have any side effects. I should be able to catch up with all of you if I do stay home.

Thank you all for the support on my last post. I'm feeling much better now. Hope is a powerful thing.

John from Johnny's Trading Spot sent me a huge box of cards. I'm still sifting through them all. I'm gonna need another Red Sox binder. And a thousand penny sleeves. Are they still 'penny' sleeves, or should we call them 'nickel' sleeves now?

My best friend from high school called me last week. We hadn't talked since before the pandemic. Guess what we discussed? Sports cards. He's one of the crowd who returned to the hobby last year and started investing in high-grade rookie cards. It was great to catch up with him and speculate on which players might be worth investing in now, and sharing our buying/selling successes.

I've actually cashed out a lot of my graded cards. My 9th-ranked 1984 O-Pee-Chee hockey set has been dissolved.

Those last 56 cards were mostly commons. 40 of them never surface, and even if each card were readily available they would be well over $10 each at this point. I figured it would be easier to sell off what I have than to complete a slabbed set. 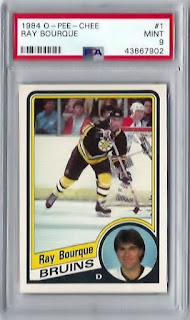 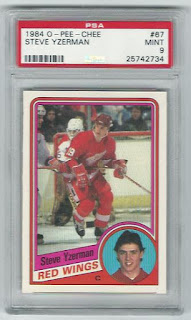 Here's the star of the set, or so I thought. I bought this Stevie Y rookie card $170.99 five years ago. It sells for close to $800 now despite being fairly abundant in this grade.

By the way, most of these cards were scanned on my old scanner which is why they look a little grainy. 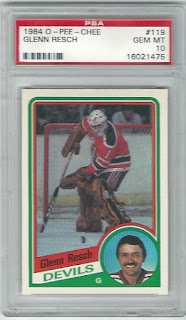 This is the only Gem Mint 10 single I saved. Bought this Chico Resch for $20.50 in 2009, the year I officially started this set. I'm tempted to start a Chico PC someday. 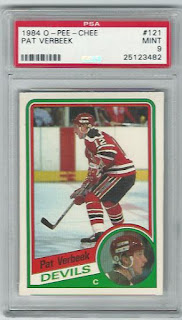 Pat Verbeek played for two of my favorite teams - the Devils and the Whalers - so I'm definitely saving his RC. I think I have a raw copy in my Devils binder, but it never hurts to have an extra. 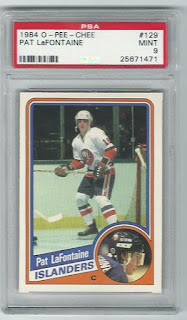 Hall of Famer Pat LaFontaine's RC is another top tier card in this set. I'd had my eye on this one since the early 1990s and brought it home five years ago for just $22.50 shipped. 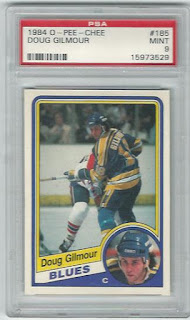 Another Hall of Famer rookie card, this Doug Gilmour is a little extra special to me. I bought an ungraded set (for $140) in 2009 and selected a few singles to submit to PSA. This "Killer" RC was the best of the bunch; a PSA 9 copy sells for about $300 today. 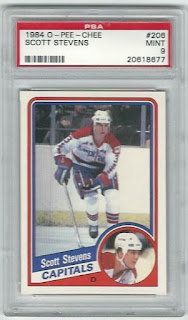 This second year Scott Stevens pairs nicely with my PSA 9 rookie card from 1983-84 O-Pee-Chee. I might even decide to do a full run of OPC Stevens cards some day. 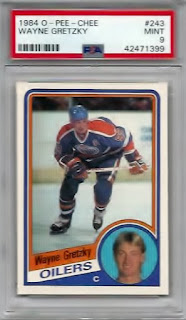 I've always considered the rookie cards of Hall of Famers to be the big draw of this set. However, when it comes to high-grade singles the Great One appears to have passed Yzerman in resale value. I sold my 1983-84 PSA 9 Gretzky but I don't plan to part with this card. 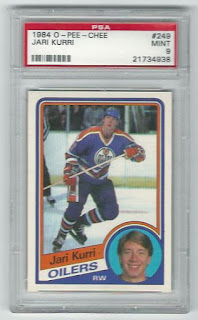 Jari Kurri's card is a keeper, too. I've always been a fan of Wayne Gretzky's wingman. 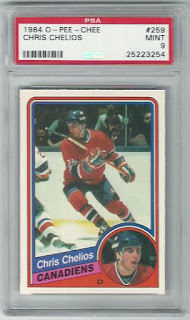 Chris Chelios is my least favorite of the "big five" rookie cards in this set. I didn't necessarily need to keep it but I like having all of the key cards in my collection. 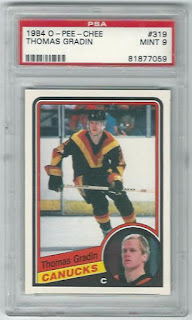 To be honest I have no real reason for adding this Thomas Gradin to my 'keeper' pile. I just felt like keeping a Canucks card. 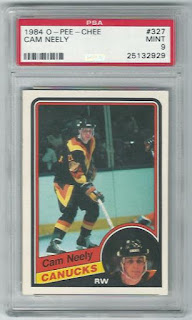 ...aside from this Cam Neely rookie card, of course. This is the sixth rookie card of a Hall of Famer in the '84-85 set; the only one I sold was Dave Andreychuk. 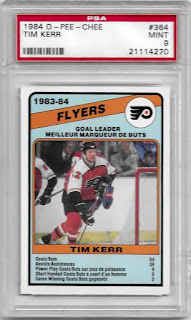 The last one of my keepers is this Tim Kerr team card. I considered saving the Sylvain Turgeon Whalers team leaders, which was a PSA 10. However this was the one subset single I wanted to keep because it was the last team leader card I needed - and it took me over a decade to track it down.
I do have a few ungraded cards from this set but I have no plans to add any more at the moment. While it is one of my all-time favorites I've seen enough of it for a while.


The Stanley Cup Playoffs are underway, and I'm not sure which team to root for this summer. I was happy with two of the past three Cup winners (Washington and Tampa) and it would be nice to see a second Caps cup. Other than that I'd be fine with the Islanders, Bruins, Knights, Panthers, or Oilers skating with Lord Stanley. 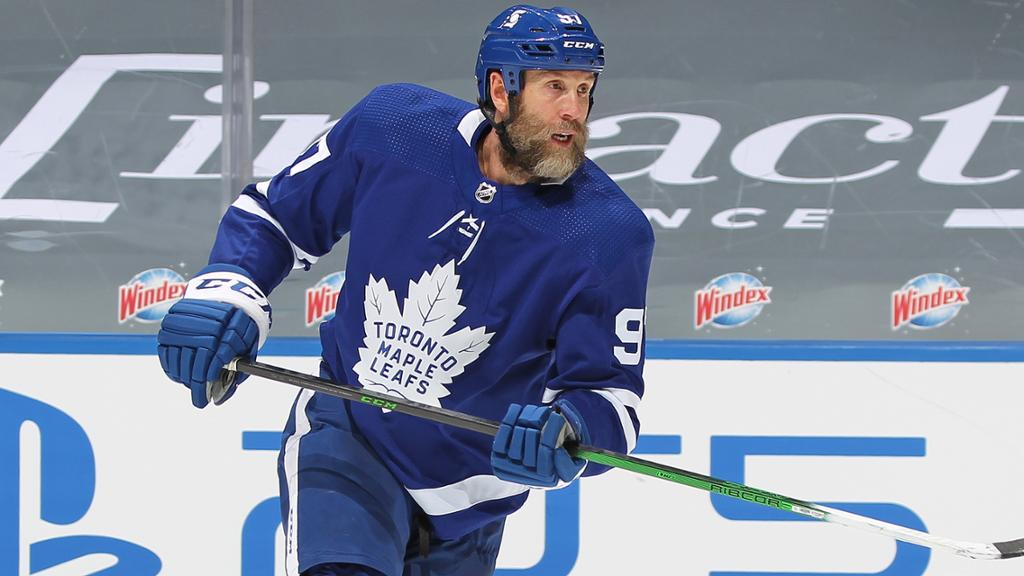 And then there's this guy.
If the Leafs emerge from the Canadian division I might have to cheer hard for them. I know Toronto fans would be insufferable if their team won the Stanley Cup but they've waited long enough. And I haven't wanted a Joe to win this much since November.

Who are you cheering for this postseason?
Thanks for reading!

Breaking Up Is Hard To Do

Some quick updates as I'm on my way to Connecticut for the weekend:

I'm thrilled that the A to Z Music Challenge caught on. It's been fun to see so many lists. I wish I could have been more active in commenting this week. Think I saw six or seven A-Z posts :)

My daughter wanted me to play Pokemon Sword so I started a game this week (I wanted to play Animal Crossing) Also took her outside a time or two before dinner.

Most of my time has been spent listing cards on eBay. I made the difficult decision to break up my 2014-15 Panini Prizm basketball set and my 1984-85 O-Pee-Chee hockey graded set. Perhaps I'll write another post about these, but the only blogger that seemed to show any interest in my OPC set .. is no longer a blogger.

I haven't been writing here or at the 1993, but I have been working on a mysterious 3rd blog journaling all of my thoughts and experiences at work.

A. Aron Rodgers wants out of Green Bay. The Packers drafted a receiver for him in the third round. His name? A. Rodgers. lol

I wont get to see my mother on Mother's Day but I'm bringing her a gift: a pewter picture frame with postcards inside: 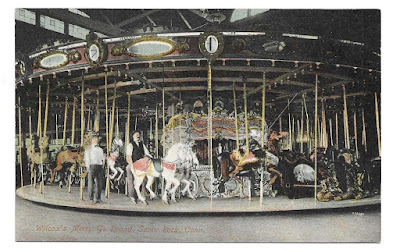 Ran across an eBay seller with all kinds of ephemera of our home town. I asked mom if she would want anything specific and she requested this white horse carousel. Childhood memories, you know?

Naturally, it was the most expensive postcard by far. Cost about as much as the picture frame.

I picked up two more postcards for her. These were much cheaper: 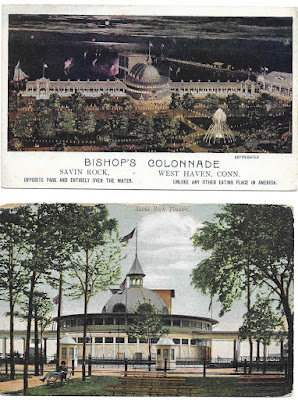 I can't fathom that such buildings existed in our home town. You should see some of the things on the other postcards. I can't even picture where The "White City" would have been 80+ years ago.

The bottom postcard, Savin Rock Theatre, is in pretty rough shape. It was only about $3, and I figured the frame would hide some of the flaws. All three cards have unmarked backs: 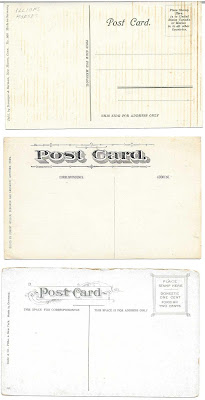 I surely would have put pictures of my children in the picture frame but it's 2021. How would you even go about getting a physical photograph anymore? (don't answer that. I know how. I just dont have the DIY tools.)

Got another round or two of eBay selling to do, and then my Spring Cleaning will be complete.