Set chunks and one more PWE

This will be my last blog post at The Collector for a while, and my last basketball post for a long while.

I'm still working on fitting all of the cards from Bo into my basketball monster box.. and now Fuji has checked in with a two-team PWE: 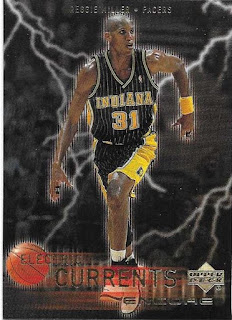 This Electric Currents insert is my 59th Reggie Miller card. He has claimed the top spot in my collection from fellow HOFer Hakeem Olajuwon. For a second I wondered why the scan looked so fuzzy, before realizing it's designed to look electric. This is why I shouldn't write before 10am lol. 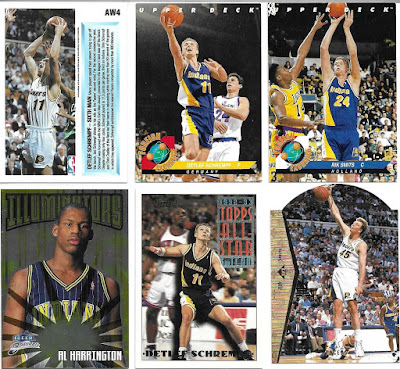 Reggie is joined by some more Pacer stars including a pair of "Foreign Exchange" inserts I don't remember seeing as a kid. I scanned the back of the Schrempf hologram because the front probably won't scan well.

Same for the Hakeem Olajuwon hologram from a year earlier. With these two inserts of "Dream", he ties Miller at the top of my PC list with 59 cards. The Flair Othella Harrington didn't scan great but it's very nice in hand. Fuji, thanks for the awesome PWE - it was well worth the wait!


Now back to the box from Bo. I received five starter sets (six if you count the 1993 Upper deck baseball chunk.) They are: 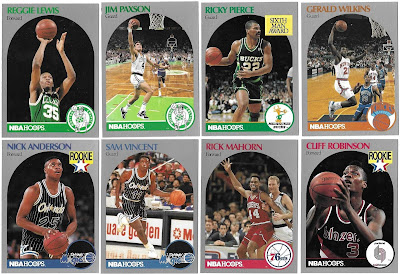 Some of my favorites include the Sam Vincent sans MJ (I do have the Jordan cameo) and the smiling Rick Mahorn with Larry Bird guarding him. I will probably attempt to complete this set because it's cheap, and it was a significant part of my early collecting years. Still need the Michael Jordan base card though. 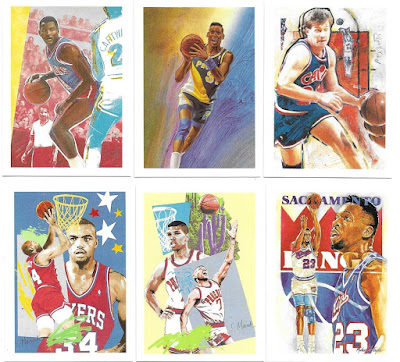 These team checklist art cards were part of a series 2 update. Compare them to the checklists from...

This is my favorite of the five starter sets in this box/blog post. However it's also the biggest, and I'm not close to completing it. I have most of the key rookie cards but I still need all five Michael Jordan singles. 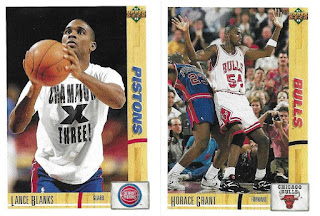 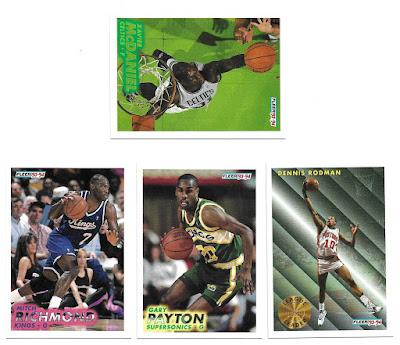 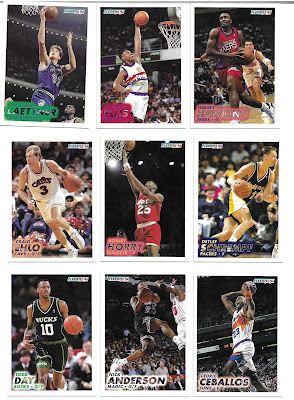 Let's fast forward a decade for the last two set chunks, including the smallest (base) set:

There are 189 cards in the complete set; I'm only counting the 90-card base veteran portion. I don't have to worry about Michael Jordan here (he appears in the serial numbered subset) but I would need Kobe Bryant, Allen Iverson, and Tim Duncan among others just to complete this base set. Hmm.. 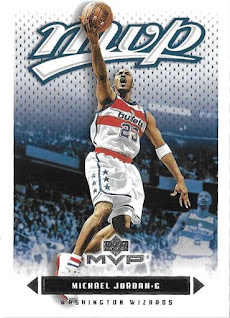 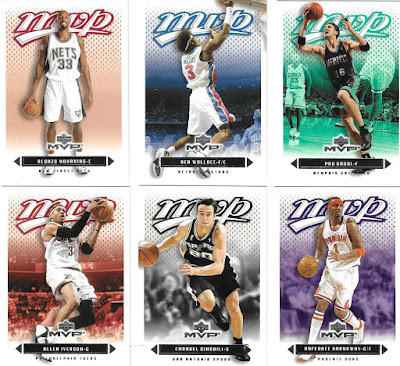 Lots of big names in this set chunk. And some names I was not at all familiar with: 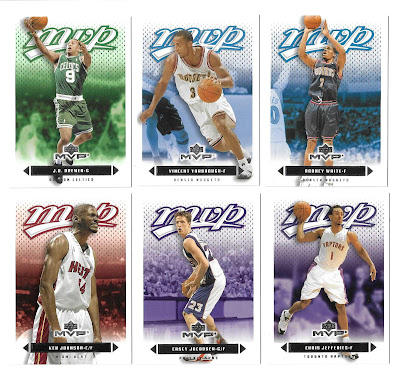 Will I be pursuing this set build? No way! I still need the Kobe Bryant base card, two Michael Jordans... 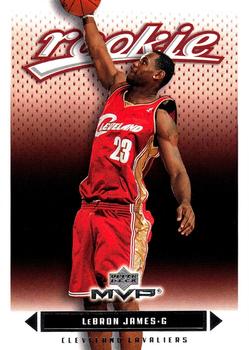 ...and all of the key rookie cards including LeBron James, which recently sold on eBay for $125.


Bo, thanks again for the big box of basketball cards!


I will be taking a bit of a break here because I have a "Run to 500" series planned and I need my COMC order to show up before that can begin. Regularly-scheduled posts will continue at The 1993.