This is going to be a long post in which I recap the remaining cards from my COMC order, squeeze in a set build, and look back at the previous 499 posts here at The Collector. On the plus side you won't have to read anything else from me for quite a while. (Notice I didn't say Never. I'll get to that...) 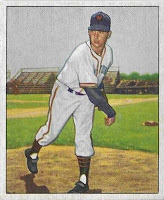 I discovered COMC in November 2013, while searching for some rare Peter Worrell parallels (that also led me to start shopping at Sportlots) Aside from the two Worrell cards I picked up hockey set fillers and some Bowman prospects. However I soon discovered that COMC had tons of great looking vintage singles available. Almost every order I placed after 2013 contained at least one card released prior to 1970.

This 1950 Bowman Sheldon Jones card was in my last order. I was very excited to see it in person. Even though COMC scans both sides it's still a bit of a risk buying ungraded vintage online. You never know what hidden flaw you may have missed on screen. However this card looks fantastic. Here's the back: 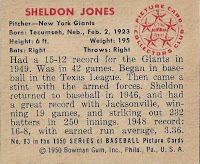 Not bad for $4.65 I'd say. This was the third-most expensive card in my April order. Coming in at number two is this Jonathan Toews 2015-16 Black Diamond Exquisite single, numbered to 149:

This 30-card set was assembled almost entirely on COMC, with two or three exceptions purchased on eBay. Every team has one base card numbered to 149. I've spent about $100 on the cards (JT here cost $5.54) and another $20 or so on the extra thick top loaders, but it's been a fun project - and it's almost complete: 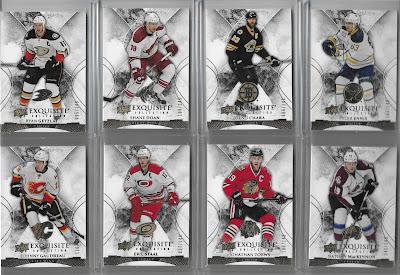 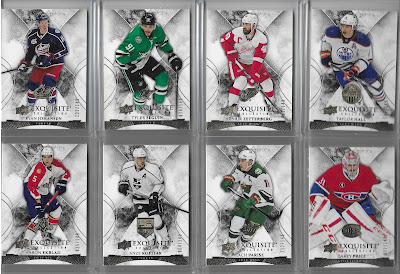 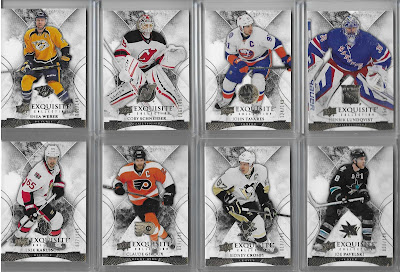 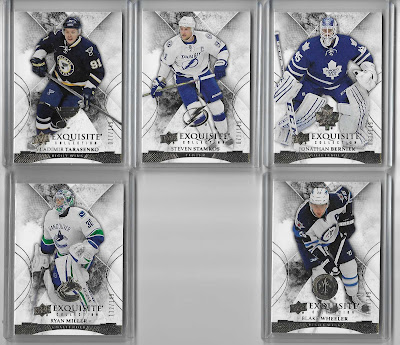 The only one I'm missing is #29 Alex Ovechkin. COMC has two copies available, but I won't be placing an order with them just for that one card (unless I can't find it anywhere else.)

My box of thick cards and relics is stuffed, but I made room for one more Immaculate Numbers acetate single. Hall of Famer Derrick Brooks is the latest addition to my collection, at a reasonable price of $12: 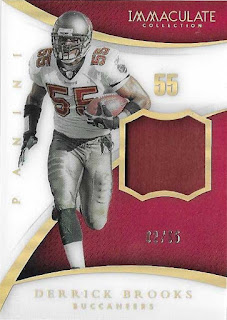 I now have 13 of the 100 jersey/patch cards from the 2015 set. Some of them were purchased on eBay (including Jonathan Stewart and Andy Dalton) As with the Exquisite hockey singles, this was out of necessity. COMC's prices are more reasonable, but eBay won't make you wait four months to get your cards!

That wraps up my COMC order, but before I sign off I thought it would be fun to take a look back at some highlights from the five years I've posted at The Collector. You probably missed my first entry here in August of 2016 so here it is:

Less than a month later I published Buying Back My Childhood: Starting Lineup This was my fifth post ever on this blog, and it remains my most viewed ever by far. On average I'd say my posts get 80-100 views, with 200+ being the high end. This one has 1,358 views!

I'm so grateful to everyone who comments on my blog, especially those who comment on nearly every post. On average, each of my regular-length posts receive 6 to 10 comments, with 15 to 20 being the high end. Four of my posts have received 30-plus comments, though that includes my replies to each. The top two of those posts were giveaways, including my most commented post ever. In third place: a post about collecting players who share your birthday.

Fourth on the list, with 30 comments (including mine) is the Celebrity Crush Championship. Since I probably won't write another post here in 2021 I'll name this year's winner now: Elizabeth Olsen.


I'm planning to publish a box break on The 1993 tomorrow, but then I'm going to take some time away from the blogs. My kids are growing up much too fast so I want to spend more time with them, as well as call my mom more often. I definitely want to get outside and exercise some more while the weather is still warm. There's also a pile of books on my shelf that are waiting to be read, and I really should continue looking for a better (paying) job. One without you-know-who.

I did say I was "retiring" from the hobby, and I will try to stick to that. It's going to take some time for me to move out my duplicates and fill my unfinished sets so I'll be active on TCDB from now until New Year's. If you haven't added me to your friends list I'm hockeydude.

However it occurred to me that I never showed off my (nearly) completed All-Time Teams collection. I might do that in 2022 -- and/or a weekly Sports Card Tour update since you all enjoyed that series. So don't unfollow The Collector just yet!


I'll pop in and comment on your blogs from time to time. Until then, thank you all for reading and following me here at The Collector and The 1993. I appreciate all of the discussions, comments, and trades. You've made my hobbies - card collecting and writing - a lot more enjoyable. Thank you!