I've been dismayed by the lack of originality in recent sets. It seems like the monopolies that produce sports trading cards are only interested in recreating past designs. That's.. not always a bad thing. I've picked up some cheap singles that pay tribute to my all-time favorite sets. And I'd love to own a couple of these: 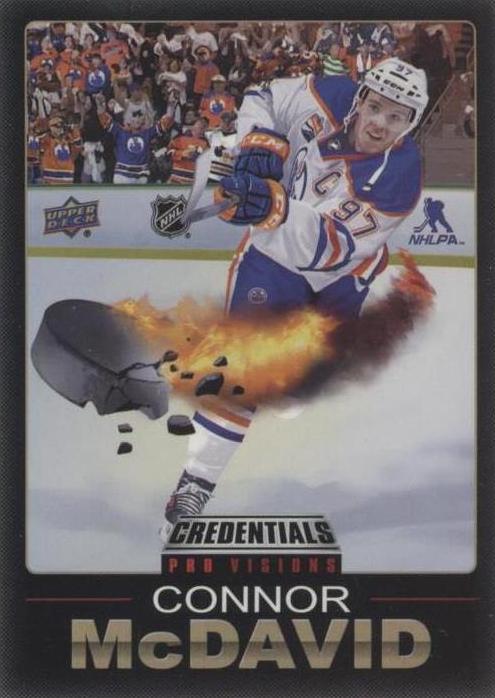 You all remember the Fleer Pro-Visions inserts from the early 1990s, but did you know Upper Deck brought them back in 2020 as an insert for their Credentials hockey set? I sure didn't.

I've seen some singles of the Credentials base and parallel sets but had no idea that these existed until a couple weeks ago. Trading Card Database lists them as an 'unannounced insert' - so even if one were to buy a hobby box there would be no indication that these beauties were possible pulls.

The Connor McDavid card above is one of six such inserts in the Credentials Pro-Visions set (and the only one sold out on COMC.) Might as well show you the whole set here. These next two aren't particularly interesting to me, but let me know what you think in the comments: 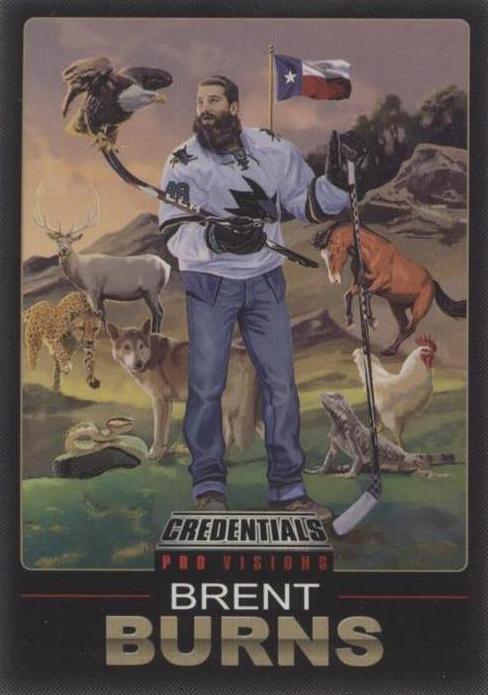 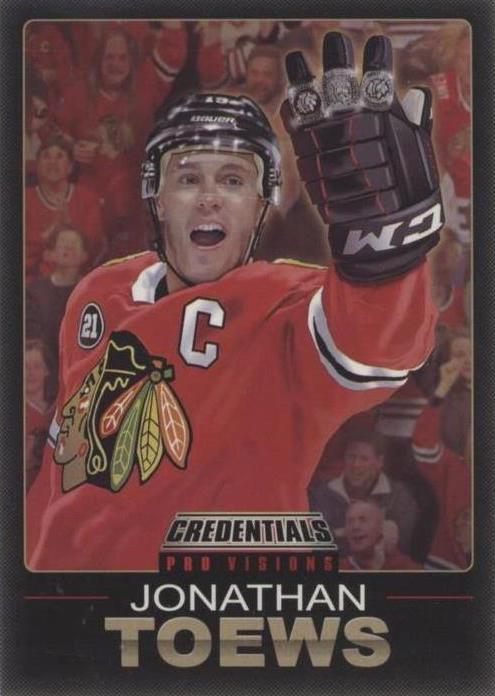 I'm not exactly sure what's going on with Brent Burns here. Are animals flocking to him because of his long beard? The back refers to him as Chewbacca, but that doesn't explain the wildlife. And that's.. a Texas state flag?!? Last time I checked, the Ontario native plays for a California team. Am I missing something here?

Toews and his comically large hand are showing off three Stanley Cup rings. It's incredibly simple, but at least it makes sense.

It figures that these two are the only singles available for under $10. This next one is exactly $10 and I like it a lot - I just wouldn't buy it because the team and player aren't among my favorites: 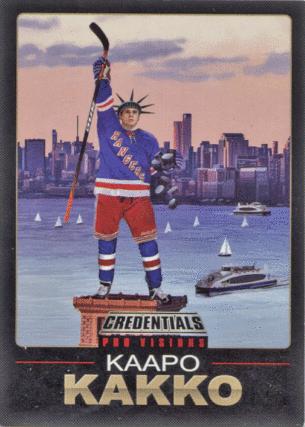 The Rangers' return to contention is so far ahead of the Devils I don't even want to discuss it. However their young stars have not developed as expected. Kaapo Kakko and Alexis Lafreniere were gifts from the lottery gods - who have totaled 39 points this season combined. Even if he never produces to the level of a #2 overall pick this is still a killer Kaako card.

And since I mentioned lottery picks (and Devils).. here's the sixth card in the set: 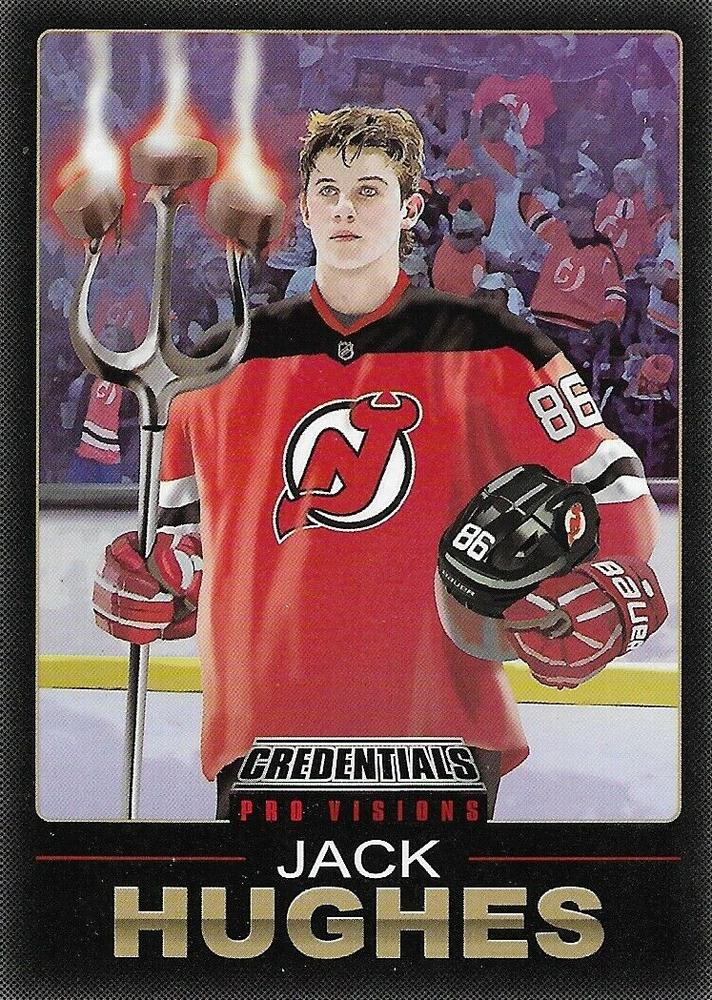 How frickin cool is this Jack Hughes card? The Devils are dead last again but it ain't this guy's fault. He was absolutely on fire before an MCL sprain shortened his season. Even if I wasn't a Devils fan this would be my favorite card in the set. McDavid and Kaako would be next on my shopping list based on  artwork alone.

If I were actually throwing down $25+ for these cards I'd pick up Hughes and Alex Ovechkin: 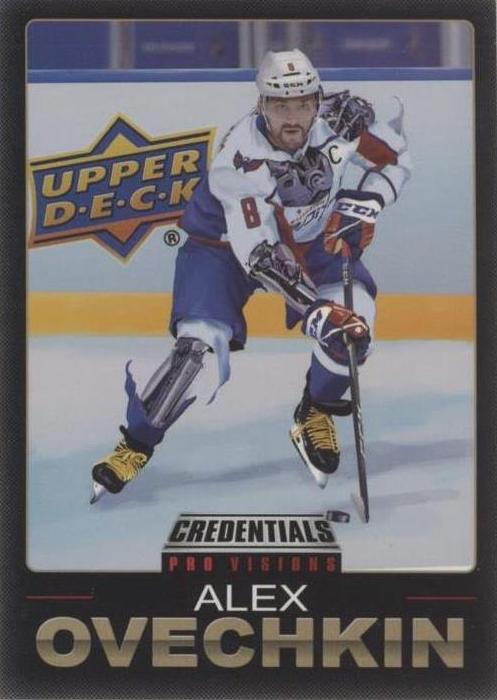 The reference here -- which was a lot more enjoyable before this year -- is a quote from his rookie season: Russian machine never breaks.

The Ovechkin insert above sells for $40 on COMC. I've spent less than that on the 51 singles currently in my inventory so I won't be adding Alex to my cart any time soon. Perhaps I'll get the Hughes one day. I'm sure the Mrs wouldn't mind that one nearly as much as the non-sports singles that have caught my eye lately....

Here's a Trevor Story Topps Inception parallel that I tried squeezing into my budget: 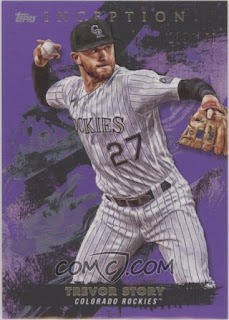 This card is only $2.75 but a) I only had $6.50 my account and b) I need to save $5 to pay for shipping. Out of curiosity I searched the seller's other items and that's when I found this beauty: 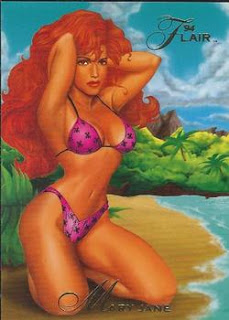 If this is supposed to be 1994 Flair it's missing something. Was Mary Jane always this sexy?

In my next post I'll discuss some cards of real-life women - who play comic book characters on-screen. The prices of those cards are astonishing, and definitely beyond my budget.. except for one ;)