For much of my collecting life I've been a stickler for condition. When I was younger, it didn't matter to me if cards had frayed corners, scratches, or poor centering - I was happy to get my hands on anything. As an adult I'm much more discerning. It's one reason why I gravitated toward graded cards. 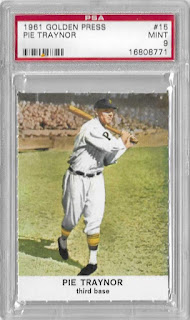 While it is exciting to have a high-grade copy of a card, especially a superstar's RC or a vintage Hall of Famer, it's more about the eye appeal for me than the prestige or resale value. The same reason I'm finicky about corners and centering is likely the same reason I replace my used 9-pocket pages and penny sleeves every three years or so.

In the post-pandemic landscape of higher prices and lesser quantities, having such collecting OCD can be costly. In addition to replacing supplies, I've attempted to replace off-condition singles from completed sets such as 1986 Topps football and 1989-90 Fleer basketball. At least a half-dozen times I've completed trades on TCDB for cards I already had, hoping for an upgrade, only to receive a worse copy. What a waste of stamps, cards, and time.

This past week, two users were nice enough to describe their cards as "well-loved" before accepting the trade. I told them that I appreciate the honest description of the cards, but that I was looking to upgrade a completed set.

I'm still trying to upgrade 17 cards from 1986 and 1987 Topps football, including rookie cards of Karl Mecklenburg, Anthony Carter, Bruce Smith, and Charles Haley. Carter and Al Toon in particular have been very tough to find with acceptable centering.

I also need to upgrade newer cards, as a pair of COMC purchases for my 2014 set build - Mike Trout and Marcus Semien - arrived with dinged corners. I learned to live with such flaws after attempting (twice) to upgrade the Logan Morrison base card. Not sure I can accept having a dinged Trout and/or Semien RC in my set.

Upgrading cards already in my collection is a luxury not unlike paying $35 for a PSA 9 Pie Traynor card for my 1961 Golden Press set build. All of my Golden Press singles are graded EX-MT 6 or better, and $35 is a fair price for a Mint 9 considering the market. However, I'm two cards shy of completing half of that set, and legendary names like Ruth, Gehrig, Cobb, Speaker, Wagner, and Cy Young are missing from my set build. If I'm going to complete this 33-card set I might need to lower the bar to include lower graded singles or ::gasp:: ungraded copies. 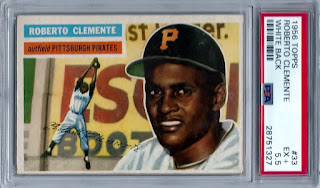 I'm at 57% completion of the '56 set, with several big names behind me. I'm not giving up on the set build.. but I am lowering the bar.

This Walt Dropo single cost me $20 on COMC: 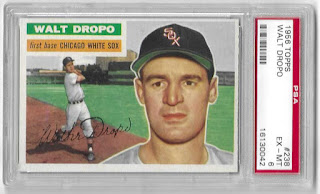 Dropo was a legend in my home state, excelling at baseball and basketball at the University of Connecticut. I sort-of saw him signing autographs at a card shop upstate when I was a kid. I spotted the store from the road, decided to stop in for a few packs, and saw that he was sitting at a table up front. I didn't know who he was at the time :/

This Jim Wilson single was part of the same COMC order, setting me back $3.19: 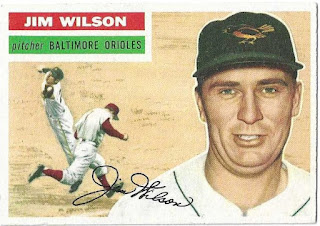 Spending $15+ on PSA graded singles of the Jim Wilsons and Ray Moores of the set doesn't make much financial sense when Willie, Whitey, Pee Wee, and other HOFers are still needed.

I do have some ungraded 1956 singles, but I try to select the best possible examples. Even after examining scans of the front and back there's always a chance that a card will have a hidden flaw. 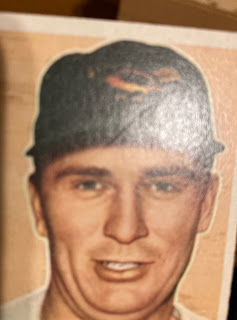 If I want to complete the '56 set by the time I turn 56 I'll need to average just over 10 new additions per year..  or add one new card per month for the next twelve years.

Guess I'll have to resist the urge to upgrade every flawed single in my connection, vintage or modern.