It's been a rough year for my favorite NFL team. The Green Bay Packers keep pushing out the rotting corpse of Throw Rogan, aka Aaron Rodgers, instead of giving Jordan Love a chance to show what he can do. I'm pretty sure the Pack could go 4-8 with Love, practice squad sensation Kurt Benkert, or the recently retired Ryan Fitzpatrick behind center - but I'm no NFL GM.

Lucky for me, the '22-23 NHL season is overflowing with hot streaks and milestones, with more on the way. 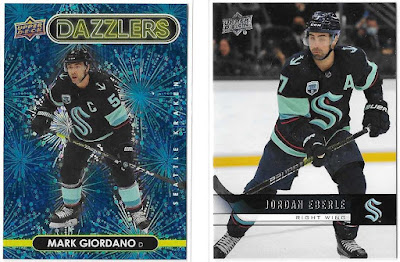 The Seattle Kraken are in second place, just four points behind the league's second-newest team in Vegas. Seattle is riding a franchise-high six-game winning streak. Mark Giordano was traded to Toronto last year, but Jordan Eberle is still here and scoring at a point-a-game pace. I'm always on the lookout for Kraken cards, like these two cheapies from my recent COMC order. Ron Francis + nautical theme + blue-green color scheme = my favorite western squad. They're basically the Whalers, right?

You know that annoying thing some football people do, where they refer to the Giants and Jets by their proper home of New Jersey - but only when they suck. And now that both teams are in playoff position those same football talkers claim they've earned the "New York" name? Yeah, it's bull crap. If the team plays in New York, they're New York. If the team plays in New Jersey, they're New Jersey.

And right now, the NHL's best team is the New Jersey Devils. Try taking credit for this, NYC (No You Can't) The Devils have the same amount of points and wins as the Boston Bruins (ooh, I bet NY is just seething)  but the Bruins have one less loss, so technically they're on top. Both teams have had incredible winning streaks this season, and neither squad shows any signs of slowing down.

I picked up a few Devils cards recently: 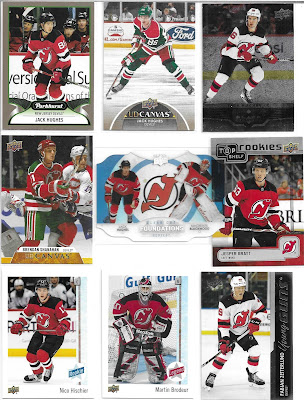 I paid slightly more for this bad boy: 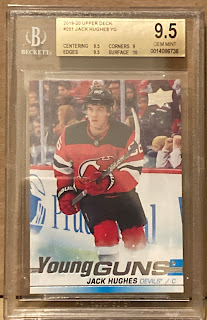 Most of my Young Guns rookies were sold to fund the 1956 Topps set build, but I had to have a high-grade RC of Jack Hughes, the Devils' top scorer and franchise player. This was one of three high-end cards I picked up after selling a chunk of my Brett Favre collection. Perhaps I'll detail that eBay 'trade' in my next post. 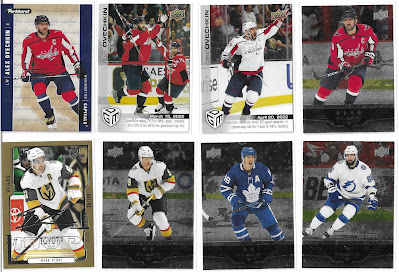 This Tim Horton's single just arrived in a trade with TCDB user Galtview. I got a bunch of Blue Jays and Whalers in the trade, too although one card was missing.

Back to the COMC box. I had to jump on this Exquisite Ovechkin card celebrating his 700th career goal... 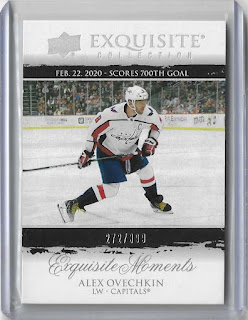 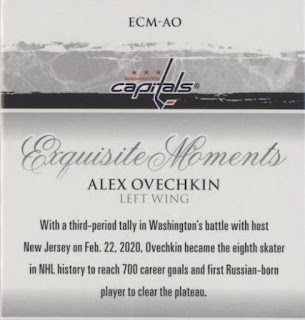 ...which he tallied against the Devils, way back when they were lousy.

Here's a few more hockey cards I ordered on COMC over the past few weeks: 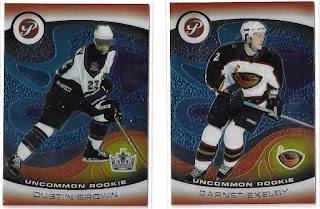 I've got more of these incoming. I'm halfway done with the Uncommon Rookies portion of the 2003-04 Pristine set.

Pretty Prizm Parallels are pretty much the only way I'll purposely purchase Rangers and Jets cards. 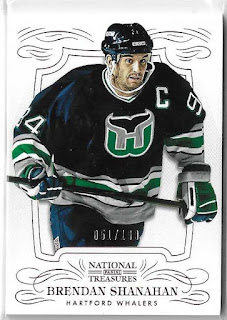 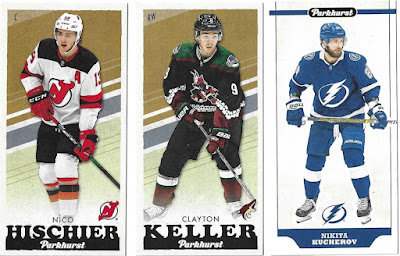