I'm not a high-end breaker. If I spend three figures on cards it's usually a graded vintage single, not a box of new product containing 6 cards or less. But if I were a gambler, Panini Immaculate Collection would be my brand of choice. 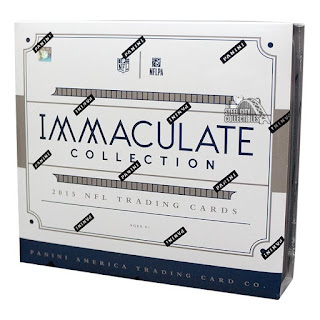 Sometimes I wish I could talk myself into busting open one of these beauties. And then I search the prices at top retailers..
Two years ago a box of 2018 Panini Immaculate Collection Football cost well over $600 - for 6 cards. And that was the sale price! 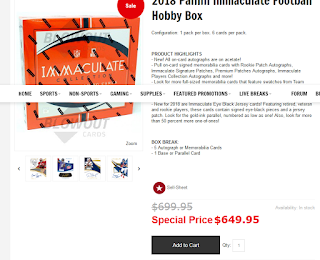 Instead of buying a box I began to run a tab documenting all my purchases of Panini Immaculate singles. The goal was to acquire as many of these cards as possible for less than the cost of an actual box of Immaculate -- which now sells for ...

Oh holy sh*t. My original plan was based on the 2018 prices for a six-card box, or even lower. I'd made an offer on an older box of Immaculate at $400 and it was declined. So... that's as close as I'll ever come to buying a box of this stuff.

Since I could theoretically buy hundreds of singles for less than $2,000 I think I'll leave them all here and discontinue the original project - though I will continue to collect these cards on occasion.

Scherzer and Barnes are the only two Immaculate singles I've received from bloggers (Dennis and Gavin respectively).

Here's the total breakdown for baseball: