Counting Stars (and a surprise mailday)


I had an idea for a series of posts that combine two of my favorite things: cataloging my cards, and discussing star players. But before I start, I have some mailday deliveries to discuss.

A.J. (of the blog The Lost Collector) sent me a dozen Red Sox in exchange for the half dozen Yankees I sent him: 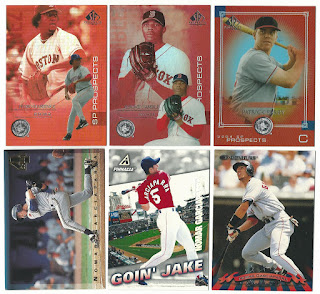 Some nice Nomars and a few SP Prospects I've never seen before. 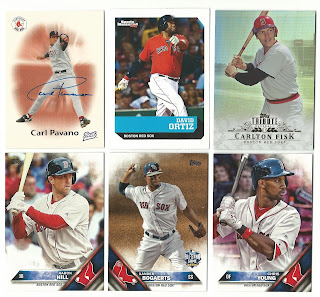 A Carl Pavano auto, an SI for Kids Ortiz, and a very cool Fisk, plus some 2016 Topps Updates.

Very cool stuff. Thanks for the trade A.J.!


I also received another package today, a box from Billy Kingsley. I guess this means I'm his Secret Santa. Billy, if you're reading this... should I open the box, or wait until Christmas?

Thanks in advance. I'm sure I'll be thrilled with my 'present'!


My base card collection is sorted thusly: all PC teams go in shiny, clean binders. This includes Red Sox, Devils, Whalers, Packers, my 700+ card Brett Favre collection, and my wife's 250+ card Brendan Shanahan collection. (Some of my complete/near complete sets are also in binders.) 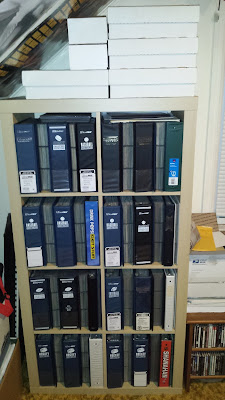 All of my commons from 1970-now are in binders as well -- alphabetical by city (Anaheim, Arizona, Atlanta...) then chronological within each team. I try to leave a space or two per team for the inevitable junk wax repacks my in-laws will buy me for Christmas.

All of my base cards of Hall Of Fame players automatically go in my "star player" storage box.


But what about retired stars who are not Hall Of Famers (like Jeremy Roenick, for example). What do I do with them?

I have been sorting this way for about a dozen years, so if a player was a star/superstar during his career then I keep him in the star box regardless of HOF status. Many such players are simply ineligible for various reasons, or they are still on the HOF ballot.

There's some gray area there, which I will get to in my 'active player' post - as in, how do I determine who is a star player? I might need your help with that, if you'd like to share your thoughts.


I'm going to go through the box tonight - starting with baseball - listing each player and counting how many base cards I have of that player (super thick commons from sets like Triple Threads, Exquisite, and The Cup are not included. They take up too much space.)

In my next post I'll have a complete tally of all my Baseball Hall Of Famer base cards. It has been a backburner goal of mine to own one card of each HOF inductee (not counting executives or Negro Leaguers - unless there are affordable cards easily available.)

After that I'll make a similar list for retired players who are not in the Hall, and then the fun will really start when I attempt to tackle active players. I'm already having an internal debate about which current players are worthy of the box, and which players should be demoted to the binders - but I want to hear your thoughts!

Hope to see you back here tomorrow. This should be fun.