My wife was headed to Target yesterday while I was at work, and so I asked her to pick me up a blaster box of 2017 Topps Archives baseball. She reported (as many on the baseball card blogosphere have) that there was slim pickins at the sports card aisle (that's aisle, not isle) and so I was unable to scratch my pack ripping itch. Which is just as well, since I have contracted poison ivy and have plenty of other itches to scratch. Or not scratch.

There was a card on my COMC watch list that I was saving up challenge credit for, and I thought that since I'd been unable to secure a blaster box of new product I could go ahead and purchase that card...and another...and another.


I have never owned a tobacco card. I know I can't afford anything in decent shape, and I'm kind of picky about condition. But I make an exception when the card is this cheap: 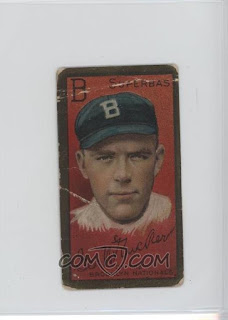 This little gem is now the oldest card in my collection by far (at least it will be when I have my COMC haul shipped to me on Black Friday.) For the price of one pack of Stadium Club I acquired a 106-year old card of a pitcher who was not only a major league starter but an above average ace - Rucker led the National league in WAR in 1911 and 1912 (ahead of such legends as Honus Wagner and Christy Mathewson) and received Hall Of Fame votes in a number of early elections.

So how was I able to grab this card so cheap? Well, the front isn't so bad..but the back... 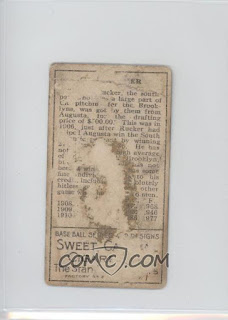 ...is a mess. Definitely some paper loss there. The card number (if there is one) and name are unreadable, other than the "ER". Still, I'm excited to add it to my collection - along with the card I had planned to purchase before spotting the Nap: 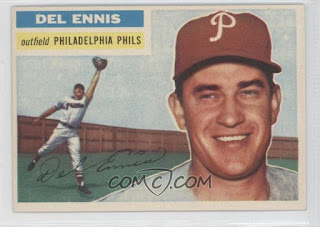 I've been craving some vintage, especially a new '56 to add to my set build. This Ennis looks sharp, though the centering is not the best. Here's the back: 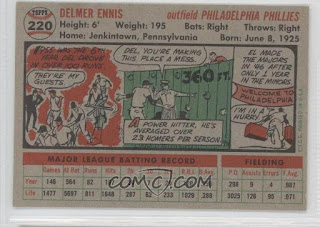 
The last card in my "COMC Blaster" is a much more modern one: 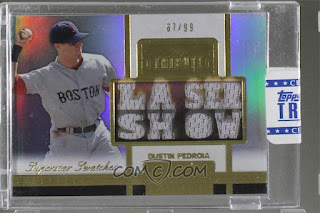 
I'm always on the hunt for low-numbered Pedroia relics and this was on my watch list for a while. When the seller lowered his price I swooped in and grabbed it. The case is pretty scratched up, I might jailbreak it when it arrives.

This trio cost a total of $19.95. I sacrificed the instant gratification that buying a blaster brings, but chances are I would not have pulled anything comparable in value out of one anyway.