I've had the urge to post something here for a while, but I was waiting for the first of three sports card purchases to arrive. (I'll post at least one "sports talk" post on The 1993 in the near future.)

As you probably know, I've been on a mission to complete as many card sets as I can. The set I was closest to completing was 2019 Score Football, as I needed just 2 of the 440 cards. A TCDB user I'd traded with in the past had both the cards and I made an offer at the end of October. No reply. I waited nearly three weeks before finally withdrawing the offer and shopping for the elusive pair on Sportlots.

That's where I found a seller with both the cards in his inventory - and a fantastic deal on shipping. 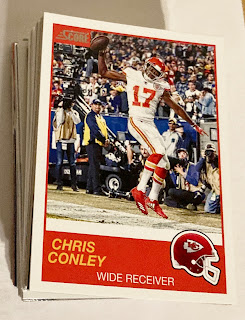 After procuring the two cards that completed my 2019 Score set I searched for more cards that fit my collection. Sheff's inventory isn't super expansive - which is good. It helps me narrow my focus. I didn't find any more set needs but I did boost a few player and team PCs - especially football: 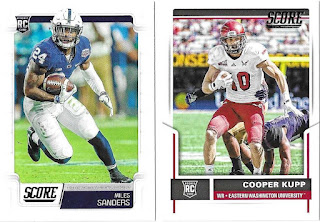 No big deal, just a rookie card of the NFL's leading receiver this year. For 20 cents or so.

You heard it here first: the Packers will finish the year 13-4, earn home-field advantage in the playoffs, and lose the NFC championship to MFing TB again.

Or maybe they'll lose to Kyler Murray and the Cardinals this year. Two Kyler cards for two dimes apiece was an exciting find, doubling my Murray collection to four cards including his 2019 Score RC. 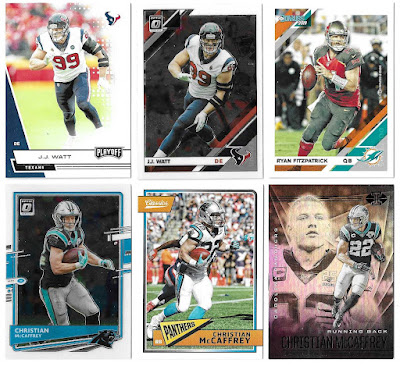 I would have been okay with the Cardinals winning the Super Bowl this year - if J.J. Watt were playing (and if Larry Fitzgerald hadn't retired.) All three of these guys are out for the year with injuries. Football is a brutal game. 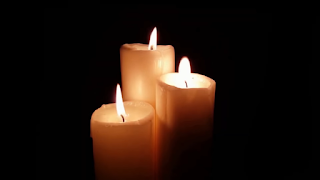 Here are some more players I collect. Tough to pass up cards of these guys for a quarter or less: 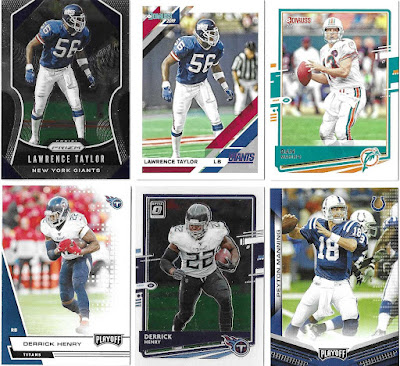 I'm not a fan of the 2020 Illusions design but these three stars are underrepresented in my collection:

Finishing off the football portion with these: 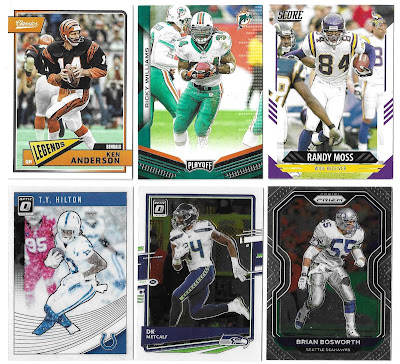 I've been scooping up cards of quarterbacks from the late 1970s-1980s including Ken Anderson. The Pro Football Hall of Fame recently released a list of semi-finalists for induction in 2022 and no quarterbacks were listed. Which leads me to this question: which retired (and eligible) signal-caller do you think deserves a bust in Canton? I've got a feeling that the next QB enshrined will be Eli Manning but maybe Anderson deserves another look? (fwiw, his "Hall Monitor" rating is just below Eli's.) 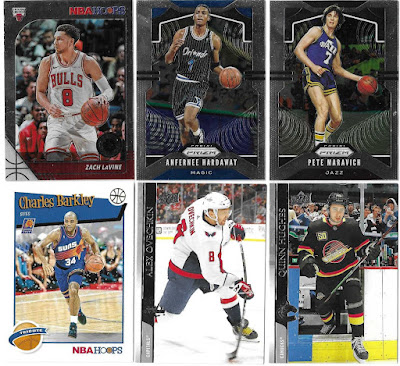 Hoops and hockey here. The Barkley is from the Winter edition. Affordable Anfrenee cards are always nice, and I didn't have a Zach LaVine card outside of the 2015-16 Donruss set. Sheff573 didn't have much hockey to choose from, mostly 2020-21 Upper Deck base cards. I'm thrilled this Ovi was available. Career goal #750 is imminent.

I also grabbed a handful of baseball singles from Sheff: 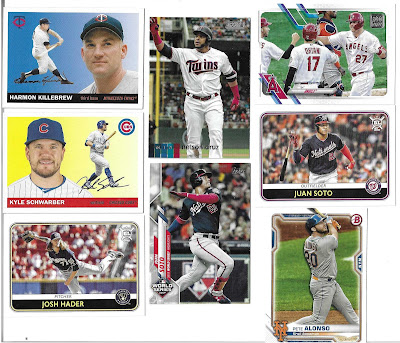 No big deal, just a card with Mike Trout and Shohei Ohtani on it. For 20 cents or so. (I know it's not a rare card, but try finding either one of those studs in a quarter box.) 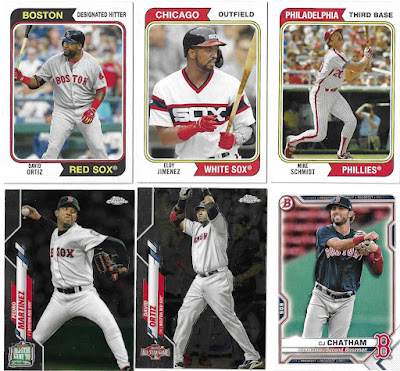 Let's wrap up this 50-card order with some more 2020 Topps Archives and some Red Sox, including a pair of David Ortiz singles. I might have to write a post about Papi when the Baseball Hall of Fame vote is nigh.

I'll have a couple more "show and tell" posts once my orders from COMC and baseballcardstore.ca arrive. I wonder which one will get here first? (probably not COMC.)