Buying Back My Childhood: Starting Lineup


Not much sports card news from me lately. I've got another COMC order on the way but it only has 22 cards (including the Nomar Mazara Chrome) and it wont be shipped for another ten days. However, I do want to share my thoughts on another childhood collecting favorite, Starting Lineup figures.


How many of you collected these as a kid (or an adult)? I absolutely loved them. I was eight when the first baseball and football sets were released in 1988, just old enough to be obsessed with sports and still young enough to enjoy playing with action figures. The stores near me - many of which are long gone like Child World, Ames, Bradlees, and so on - always had dozens of Starting Lineup figures in stock. Original price was about $4.99 as I recall.

My allowance was probably $5 a week back then, and I had so many interests at the time (Nintendo games, Garbage Pail Kids, baseball cards, Teenage Mutant Ninja Turtles... probably some other stuff, too) that I almost always had to settle for one SLU per toy store trip. This was always a difficult choice, and I had some epic fights with Mom over having to put one back - especially when I found a "rare" figure of an out-of-market player.

I soon noticed that 90% of the figures were from local teams - Red Sox, Mets, Yankees, Giants, Jets, and Patriots. (There may have been basketball figures on the shelves but I'm not certain I saw any - except possibly a few Celtics.) At first I was happy to own any player from any team: Dwight Gooden, Rickey Henderson, Roger Clemens, and Wade Boggs were among the early additions to my collection. But once I studied the checklist on the back I realized that there were so many more players available that I had never seen. 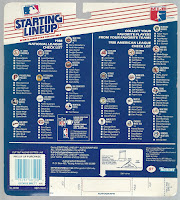 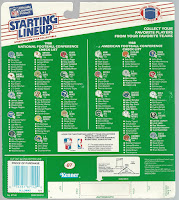 This fascinated me as a young fan of sports in general but not yet one specific team. The least popular teams and players were even more intriguing - and it became my goal to hunt down as many as I could find. Unbeknownst to my young self this was difficult by design; Starting Lineups were distributed in regional cases and the only way to acquire an out-of-market player was either through the Starting Lineup catalog (which I forgot had existed until this Uni Watch article) or an "all-star assortment." I have to assume that this was how I was able to purchase SLUs of players like Dan Marino, Warren Moon, Mike Singletary, Tony Gwynn, Kirby Puckett, Fernando Valenzuela, and sooo many more.

But how the heck did I end up with Sid Bream, or Kent Hrbek, or Darrin Nelson? Was it the mail-order catalog? And if so, why did I choose those players? More likely I just lucked out with a few random finds. That was always my goal - to find the most random player possible. Even as I got older and found new ways to collect SLUs - hobby shops, card shows, and a mail-order list from the Kenner Kid (which I still have somewhere) - I always had more fun collecting the tough out-of-town pieces.

As you probably know, Kenner/Hasbro ceased production of Starting Lineup figures around 2000-01, which ceded the sports action figure market to McFarlane SportsPicks. I collected a ton of those as well - and by then I was an adult with much more disposable income. The McFarlane figures were much larger and more detailed (and more expensive), and even though it was fun to chase "variant" pieces it wasn't the same feeling as I had being 8 years old and finding a Miami Dolphin in a sea of New York Giants.

When my daughters began accumulating toys of their own, I had to purge some of my memorabilia to make room for their toys. The hardest thing to part with were my action figures - but they took up the most room.  Half of my McFarlane collection was shipped out through eBay sales - and it was a nightmare dealing with UPS and their crappy rates. One day the shipping would cost $14, the next day it would be $22 for the exact same size and weight. I didn't know if the distance made a difference or the cashier at UPS, but I got sick of letting my sports figures go for practically nothing.

The good news (at least for me) was that my Starting Lineup figures were worth practically nothing. Most of them were common baseball and hockey pieces, none worth more than $25 or so. But to be honest, I've never really found a sports figure price guide that I trust so it's all sentimental value to me. I know the first and second year figures ('88 and '89) are most valuable, and after that the value drops like a rock.

Much to my amusement, the handful of SLUs that sell for hundreds of dollars today are the most obscure players from the most obscure teams - Marc Wilson, Bill Fralic, Scott Fletcher, any Utah Jazz player, and so on. Even if I had been able to find these rare gems back in the day I'm certain that I would have opened them and played with them so frequently that they'd be practically worthless now. For example, I lost my Marino figure in my sister's backyard (it was later found with much of his head and arm missing - possibly due to her dog using it as a chew toy.)

Some of the SLUs in my collection were submerged in the bathtub; the lettering on my Bernie Kosar figure practically dissolved. And, for some reason, I covered Tony Gwynn's foot with white-out and stuck him on my roof (what did Tony do to deserve that?) It wasn't until 1993 that I was able to resist opening my SLU figures - I thought that if I kept my Ken Griffey, Jr. figure sealed in its original packaging that it would be worth $100 by now. It's not even his first piece so I doubt it's worth more than $20 - but I still can't bring myself to open it.


As I watch my girls grow up (way too fast, I might add), I'm growing more and nostalgic for my own childhood. I've often said that I want to take a year off from collecting sports cards and do other things instead - buy more music, read more books, and collect pieces of my youth such as Garbage Pail Kids, Nintendo games, and Starting Lineup figures (I'll skip the TMNT toys and maybe collect Simpsons figures instead.) I do have a couple loose SLU's and the girls pick them up and pose them even though they have no interest in sports (yet?) It makes me wonder if I should open more of my pieces - to share my childhood with them and to save space in my upstairs room.

Recently I shopped for early issue SLUs on eBay and found a 1989 Mike Singletary for a low price. The package was pretty beat up and if my best offer had been accepted I would have seriously considered opening it. But the seller wouldn't budge and neither would I. A much nicer Singletary was available for about $25, and I also considered a 1988 John Elway and a 1989 Jerry Rice at about the same price. Instead I fit two football figures in my budget, Ickey Woods and Bubby Brister: 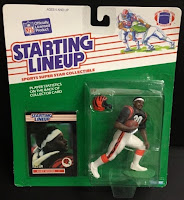 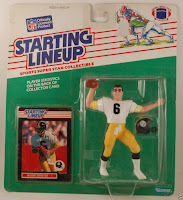 I thought about calling this "The Ballad of Ickey Bubby"


The Brister was in my collection about fifteen years ago, along with a few other football pieces I purchased from a local dealer. I never had the Ickey Woods, and I'm not sure I have ever owned any Bengals. I like the idea of buying one piece I used to have and one that I didn't. Maybe next week I'll purchase a pair of baseball SLU's - Paul Molitor (had it) and Vince Coleman (didn't have it.)


Do you collect Starting Lineup (or McFarlane SportsPicks) figures? If you have any in your collection, are they sealed or loose?

Email ThisBlogThis!Share to TwitterShare to FacebookShare to Pinterest
Labels: buying back my childhood, Starting Lineup, toys