I am not from Wisconsin. I've never been to Wisconsin, and I don't think I've ever met anyone from Wisconsin (my grandmother might have been born there. we're not sure.) That said, the lack of tangible ties to the badger state hasn't kept me from developing an affinity for their sports teams. 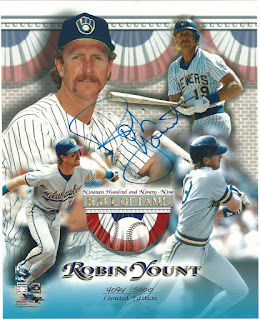 Robin Yount was one of my favorite players growing up. He signed this 8x10 for me at the East Coast National in White Plains, NY about ten years ago.

I haven't finished - and in fact I've barely started - cataloging my baseball cards, but I know I have at least 100 different Yount cards. I'd be surprised if that's not the most cards I have of any player who never played for the Red Sox. 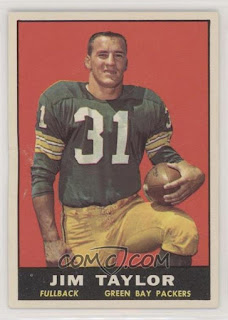 You all know I'm a Packer backer. I have nearly 2,500 Packers cards in my collection - though none of them were released before 1977. I've been spending my COMC challenge credit on Brett Favre inserts, Devils cards, and other cheap stuff, so when I spotted this 1961 Topps Jim Taylor I vowed not to buy anything else until I "earned" this first. Red background aside, this is what a football card should look like.

It was high time I added a vintage Packer legend to my collection of Favres, Whites, Rodgerses and Mathewses. And this card was on sale for one day at the low, low price of..$9.07.

COMC had the condition listed as Good to VG-EX. I couldn't see anything wrong with the front, so I assumed there must have been some writing or paper loss on the back: 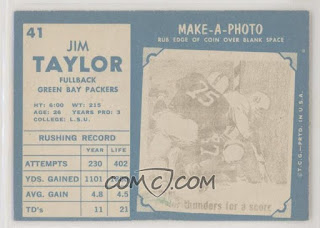 Well..technically it's been scratched off, so I guess that counts as paper loss. But I don't mind. It's like the dealer at the Milford card show said to me - this is going in my PC.

I wanted to show this off now, since I don't plan to bring home any of my COMC purchases until after Black Friday. There are six other Packers sitting in my 'to be shipped' inventory..and one Milwaukee Bucks card: 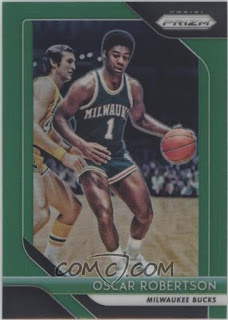 This green Prizm parallel of the Big O is more typical of the cards I've been buying on COMC. Add the 51 cents this card cost to the $9.07 for the Taylor, and throw in another 42 cents for this Brett Favre.. 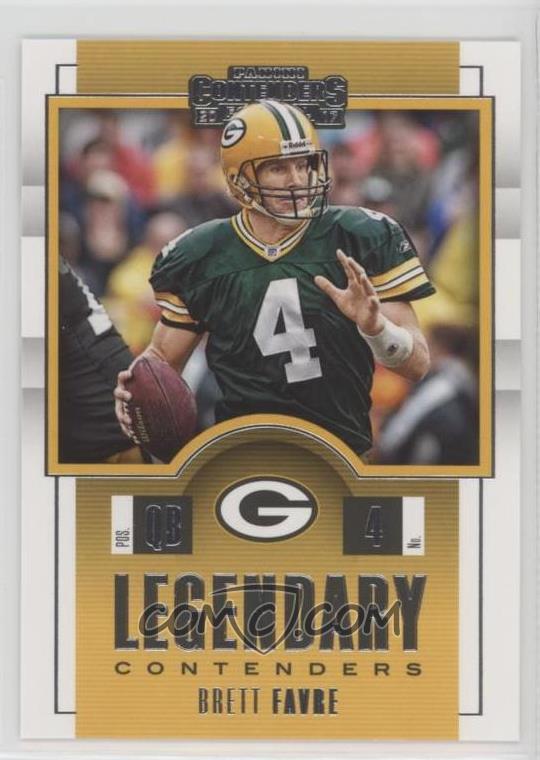 ..and you have an even ten dollars. But this isn't a COMC Blaster* post. This is a post about ten Bucks.
*TM Shoebox Legends

When Kerry (Cards on Cards) rebooted his Guilt-Free Basketball Card Club I was excited to join in the fun, and swap some cards with a very generous trader. Only problem was..I didn't have a favorite basketball team. I'd hinted at maybe becoming a Bucks fan during the Milwaukee stop on my Sports Card Tour, but they were one of a handful of teams I could see myself rooting for. Small-market teams appeal to me, and I've grown tired of seeing the same two teams in the NBA Finals every year (at least Cleveland won't be back.)

I haven't watched enough games to call myself a fan, and I'd feel guilty about jumping on the bandwagon now, with the Bucks sitting atop the standings. But I do enjoy collecting Bucks cards more than most other NBA teams. Right now, the Bucks rank 6th in my NBA collection, due in part to a surprising amount of players I like to collect. 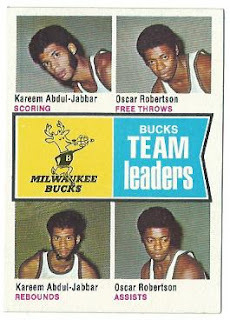 This is the oldest and best Bucks card in my collection, the highlight of my Secret Santa gift from Mark Hoyle. I would have loved to see these two titans of the game run the floor at the MECCA. 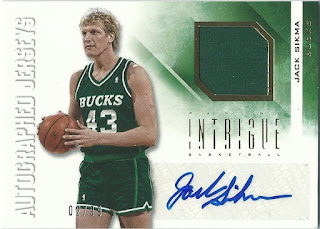 Jack Sikma was nearing the end of his career when I started collecting cards. He's one of many former Bucks in the "Hall of Very Good" along with Bob Dandridge, Marques Johnson, and Sidney Moncrief. 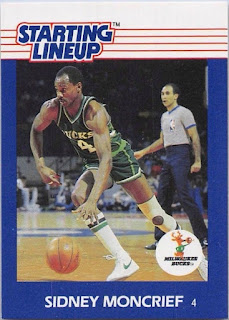 Moncrief's Starting Lineup figure was one of those out-of-market pieces that I desperately wanted. (The Sikma SLU is far less appealing. Kenner made him look like a neanderthal) I never did get a Bucks SLU, but I'd like to get a Moncrief card from something other than NBA Hoops. Hall of Famer Moses Malone succeeded Sikma at center for the Bucks. This card is in my collection, and it features that cartoonish deer I saw a million times in my card piles. By the time Ray Allen arrived, the Bucks were wearing purple as a primary color. Allen is probably the greatest UConn alum in NBA history, and as such, is a primary reason why I claimed the Bucks in Kerry's trading club. Of course there's also the Greek Freak, Milwaukee's franchise star and potential NBA MVP. If he were the only Bucks player I was interested in collecting, chances are I wouldn't have claimed them.

The Bucks also boast Khris Middleton, who shares the same first name (almost) and birthday as yours truly. Matthew Dellavedova is another guy I collect. I have a few of his Cavaliers cards but none with Milwaukee. It's a shame that he was squeezed out of the Bucks' rotation just when they were getting good, but he sees to be embracing his role as a leader on the rebuilding Cavs.

Finally, here's another look at one of the most recent additions to my Bucks card collection: 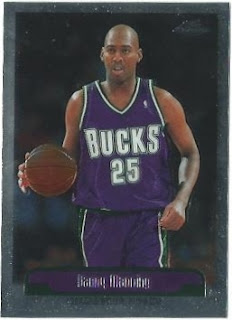 I missed out on so many great cards like this Danny Manning during my nearly two decades years away from basketball card collecting.  Even if someone who isn't a regular reader and only comments for the free cards scoops up all the Greek Freak singles I'll be happy with whatever Bucks cards come my way.

So there you have it..ten Bucks. And I didn't even mention Eric Bledsoe, Malcolm Brogdon, Glenn Robinson, or Michael Redd. (perhaps I should have done a twenty Bucks post..lol.)