I'm headed out to a bar to meet a co-worker friend (you may remember him as "young guy") and my blog is sort of in limbo at the moment (potential overhaul but no time yet) .. but I wanted to share something with you all.

I listed five cards on eBay recently. Four of them sold. This one didn't: 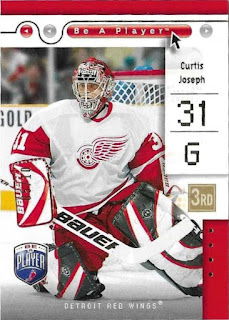 This is a third period parallel of borderline Hall of Famer Curtis Joseph. If you look on his blocker pad you'll see it's numbered to ten. My wife and I bought about a dozen packs of Be a Player that year and one of us - probably her - pulled this card. I listed this for $34.99 with a Buy It now price of $49.99, using a sold copy of a Jose Theodore third period parallel as a guide. No one wanted to give me $35 for this CuJo. However... 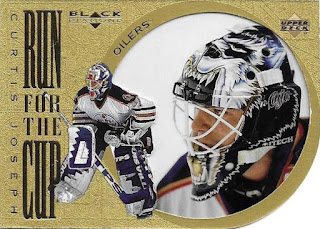 The Mrs. pulled this card from a box of 1996-97 Black Diamond hockey 25 years ago. These Run for the Cup inserts are tough pulls, but as you can see on the back... 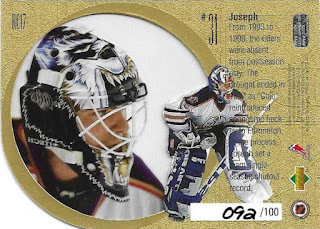 ...there are 100 copies of each. I had never considered selling this card because a) it's not technically mine, and b) the Oilers were always my second-favorite team. But the economy is kinda weird right now, and neither of us have the passion for card collecting that we once did. I'm starting to think of the giant piles of sports cards and memorabilia my daughters would inherit upon my passing. They wouldn't know what to do with all the stuff. What's valuable? What's not? Hell, I don't even know anymore.

Just for the heck of it, I looked up recent sales of Run for the Cup inserts. This is the only one I found:

Obviously Messier is an all-time great while Joseph is, in my estimation, the greatest goalie of all-time .. who is not in the Hall of Fame. (No cups, no Vezinas, never led the league in goals against average, shutouts, or wins.) So I listed the CuJo card at $199.99 with a Buy It Now price of $499.99.

As for the blog, I'm thinking of changing the name and theme this summer. But I'm also working on a novel and a short story, and the family's schedule has been brutal lately. Maybe after the playoffs...

Have you sold any cards for much more than you were expecting?