I spent a few days in Boston. My daughters wanted to see some historical landmarks so we visited the Old State House, South Meeting House, Freedom Trail, and Paul Revere House.

There were some Topps cards in the Old State House: 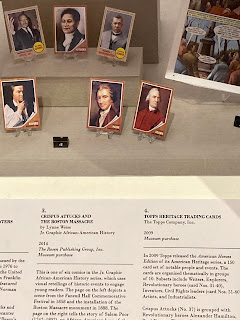 I sent my former manager G a postcard. Told her I miss my restoration "family" and wished her a happy spring. Asked about her daughter's cheer competition and told her to let me know how it goes. I ended the message by saying hi to K-dub and Baldy. And no one else.

On Wednesday we had dinner at the Hard Rock Cafe. While waiting outside some Masshole asked me if I was a Celtics fan. I was wearing a Vegas Golden Knights hat. I told him no. "Why not?" He shouted outside the passenger's side window. I don't dislike the Celtics, they're fine. And I'm happy that they're beating Brooklyn. But I root for players, not a specific team. That would take too long to explain so I just told him I wasn't from Boston. "No? Then what the fuck are you doing here?" Good question. 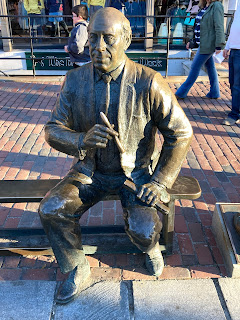 Red Auerbach statue at Quincy Market. My nine year old saw the plaque with Larry Bird's shoes to Red's left and surmised that this was Larry legend.

Stopped into Newbury Comics. My daughter got a squishmallow. I saw a scattering of sports cards but balked at the price: $40 for a blaster of UD hockey; $8 per pack. $4 for a pack of MVP hockey. There was Topps baseball but I couldn't see the price tag. Probably $40 for a blaster there, too. I got excited for a second when I saw Panini Prizm.. but it was a wrestling blaster.

Newbury had a pack of regular-sized top loaders: $10.99 for 25. Same price for ten super-thick top loaders. No thanks.

Alex Ovechkin hit 50 goals for the ninth time. I'm hoping Jonathan Huberdeau wins the Art Ross trophy because he won't win the Hart. Mike Bossy passed away before my vacation started. Guy Lafleur passed away while I was in Boston. 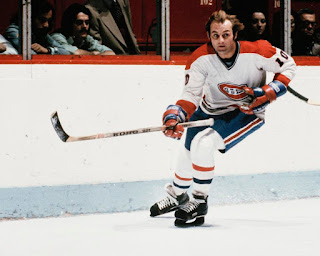 Watched a Red Sox game Friday night. The Sox nearly took a 7-2 lead but Travis Shaw's home run was ruled foul. The Rays had runners on and nobody out in the bottom of the ninth so I turned it off. Somehow Boston's bullpen held on for the 4-3 win. 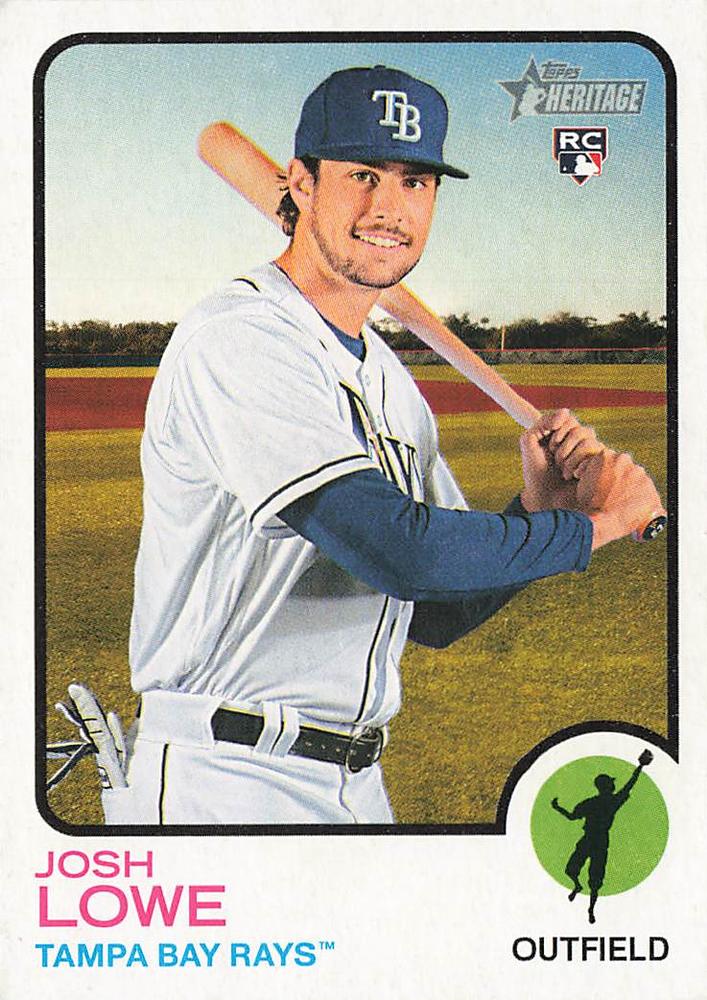 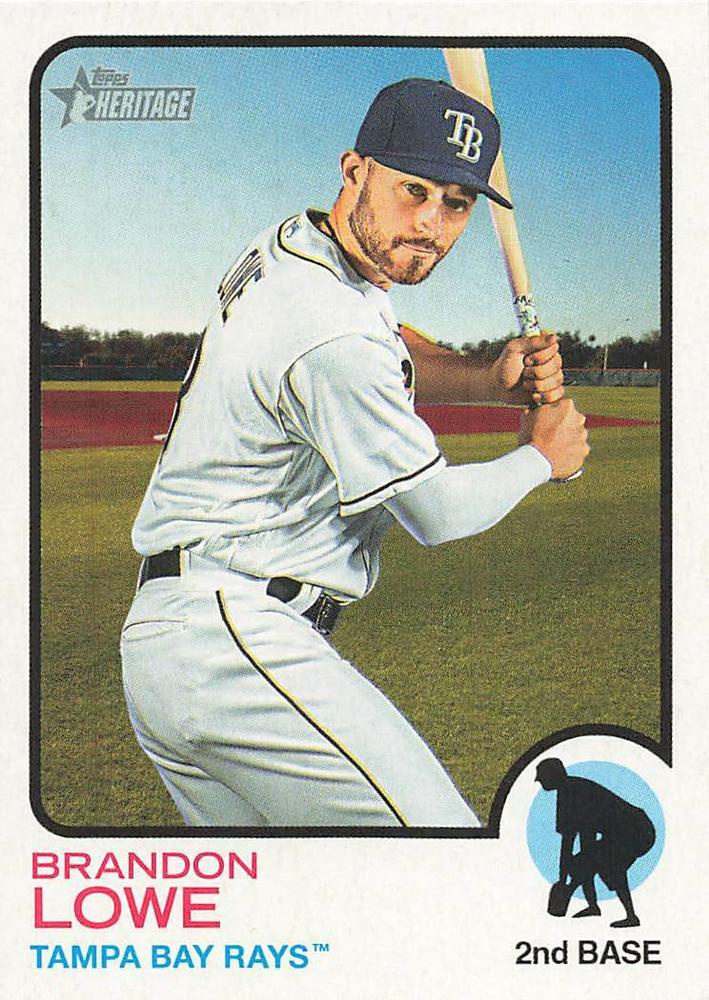 Miguel Cabrera collected his 3,000th hit while I was gone. Shout-out to the Rockies for having the guts to pitch to him. 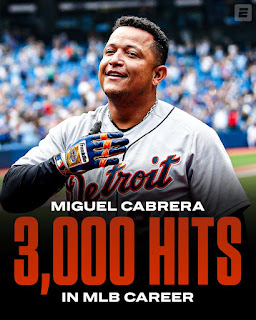 The weather was nearly flawless while I was on vacation. In Jersey it rains every other day, and every single Saturday. Aside from some brisk wind every day was perfect. 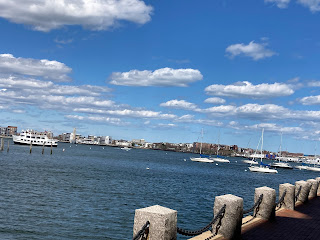 We spent Saturday in Salem. On the way up I passed two sports cards and memorabilia stores in Saugus. They were right off the highway but we'd left Boston without eating breakfast. If we were going to stop it would have to be on the way back. 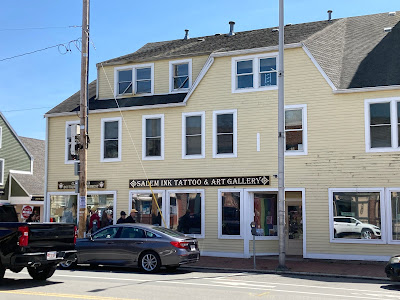 While the Mrs. went looking for distant relatives at the burial ground I ambled about town haunted by a more recent past. 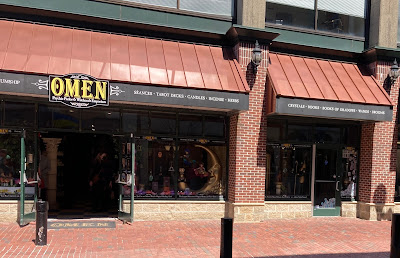 In between the shops and the cemeteries a bubbly blonde woman clapped when she saw me. No one has been excited to see me in quite some time. "Are you from Las Vegas?" She asked me. I had to tell her I wasn't. She apologized for stopping me and explained that she's a big Golden Knights fan. "That's awesome!" I replied. Was no trouble at all for me, in fact it was nice to be interesting for a moment.

I have now become the guy who wears hats for the logo and colors, rather than the loyalty to team. My tween self would be so disappointed. 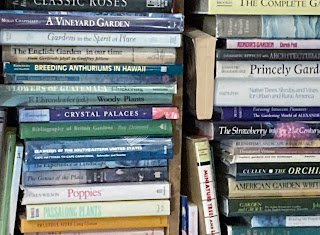 At least it disturbed me from my crystalline stupor.


We left Salem around 2pm. The GPS didn't send us through Saugus on the trip home. It sent us to Peabody. 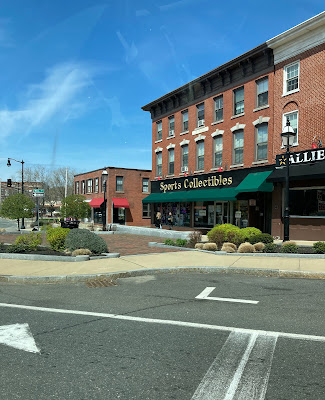 So close, yet so far away. This wasn't on our itinerary, therefore the driver did not stop. Maybe next time.


We stopped at my mom's on the way home. I was exhausted and in a mood so it hit up eBay. Bought three singles from the same seller, all set fillers. One was a Patrice Bergeron RC.. to commemorate my trip to Boston.

When I got home I had three PWEs waiting for me, including the custom cards from Gregory at Nine Pockets. I'll show those off soon.