I'm going to test a hypothesis here. Let's assume that the reason my Women In Music post garnered over 650 views wasn't because of Brie Larson, but because y'all just enjoy talking about music. 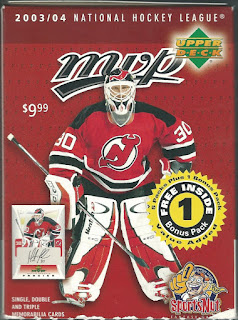 Here is an empty blaster of 2003-04 Upper Deck MVP Hockey. I've saved it for almost 17 years because Martin Brodeur is pictured on both sides. 2020-21 MVP Hockey is set to hit shelves later this month. I doubt there will be dealers hoarding blasters of 'em, but you never know.

This is the Devils' unofficial theme song. It has been played at Continental Arena and the Pru Center for as long as I've lived in Jersey. It's also my favorite devil-themed song. "Sympathy For The Devil" is okay. I'll pass on "The Devil Went Down To Georgia".

Can you think of any other songs with 'devil' in the title or chorus? Do you have a favorite?


Inside this opened blaster I've stashed sixty empty wrappers. Thirteen of them are from a box of 1993 SP Football I bought in the early aughts. 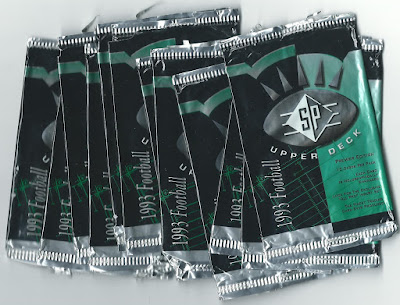 In 1993 I became a huge fan of Smashing Pumpkins. The first SP song I heard on MTV was "Cherub Rock", and "Today" was very popular as well. But my favorite track at the time was "Rocket"


This was the first song I recorded and rewinded rewound again and again so that I could decipher the lyrics. (I'm still not certain I have them right.) My best friends cheated and paid a dollar to send away for the lyric sheet. Ah, the pre-internet days.

Do you have a favorite Smashing Pumpkins song? Have you ever loved a single despite not knowing what the heck the singer is singing?

1992 Upper Deck was one of my all-time favorite football sets. I loved the cracked granite design. If the set had any decent rookies at all I probably would have bought a box or two. I bought a lot more Topps Chrome in 2004 than I did in 2003; kinda surprised I saved this plain green wrapper from a set I didn't particularly like. 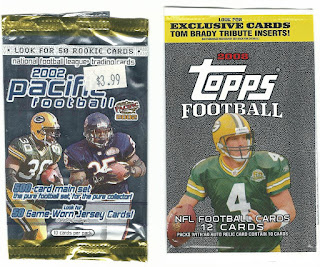 Speaking of green.. I know why I saved these two. I don't know why I paid $4 for a pack of Pacific though.

Whenever I'm annoyed by the repetitive playlist my manager listens to all day every day I try to find an earworm of a song that I actually enjoy, preferably one that I haven't heard a million times. Lately my go-to has been "Crazy" by Gnarls Barkley.


Is there a song you're so sick of that you might go crazy if you hear it one more time? 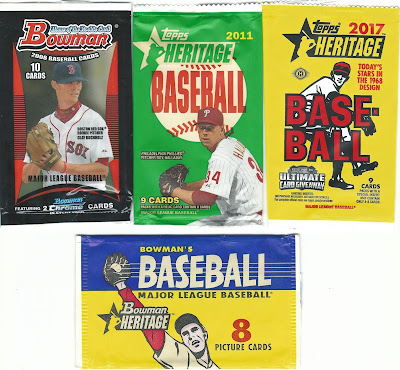 I saved eight baseball card wrappers (aside from the 2018 Opening day wrappers I just added) 2008 Bowman and 2017 Topps Heritage are very familiar to me; I bought multiple boxes of both products. This 2004 Bowman Heritage pack was the only one I purchased, and I'm not sure where I found it. I wish I had bought a box at the time. The 1955 Bowman design is a classic.


Most of my favorite rap songs are classic tracks from the early years of hip-hop. I don't remember hearing Run D.M.C.'s "Rock Box" until I learned that Chris Rock sampled it for his satirical track "Champagne".

Who's your favorite old school rapper or group? Do you have a favorite satirical song or a track from a comedy album?


There aren't any basketball wrappers in this box, so this next segue is kind of a stretch...

In high school my best friend was friends with a guy named Mark who I did not get along with at all. I knew little about him except that he loved the band Korn and he was a Chicago Blackhawks fan. 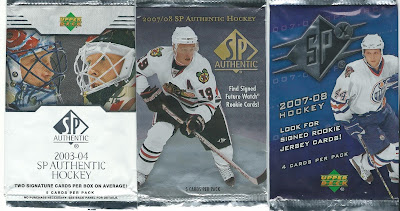 Also he knew all of the lyrics to the Onyx song "Slam" and rapped this whole track on the way to my friend's house one day after school. This was always one of my favorite jams:

I'll save the rest of the wrappers for Volume 2. Thanks for reading and listening!