This post contains a handful of music videos and zero sports cards. If you're not a fan of video clips in a blog post feel free to skip it. Thanks.

I'm grateful to have an "alternative" rock radio station that I can listen to on my way to and from work, or for long drives to Connecticut. However Alt 92.3 is highly flawed.

I'm also grateful for my job. It's easy, to the point of boredom, but my bosses are friendly and my co-workers are like family. My manager G is the best. The only complaint I have is that she loves country music. Her Spotify playlist is loaded with Luke Bryan, Carrie Underwood, and the like. Some of you may like that sort of thing, but it gets repetitive after a while. I've heard it eight hours a day, five days a week, for the past year. My ears need a vacation. 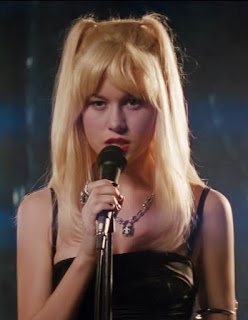 Because of this I rely on Alt 92.3 to wake me up and give me two songs to enjoy before the inevitable assault on my senses begins. Far too often my station fails me.

Last Monday I was particularly frustrated with their selection. After starting far too many mornings with Billie Eilish I heard this track on my morning drive. I was already in a salty mood and complained about the "sleepy girl music" this station seems to love.

My wife took me to task. With two girls in the car, she wanted to make it very clear that girls don't exclusively make sleepy music (hello, Coldplay?)

Of course I knew that. But I didn't have the time or energy for a nuanced discussion.

Once I was at work and had some time to think, I started to realize that I've actually liked a lot more female singers than my wife has.

I'm the one that rocked out to "Barracuda" on Guitar Hero. I'm the one that can name the late singer of the Cranberries (she asked me this three days ago after Alt played "Zombie" for the 865th time - after work, of course.) I'm the one that went to a Jewel concert and wore a Garbage t-shirt to school and owned not one but two Veruca Salt albums.

Andso I complied a list of my favorite female singers while at work (to distract myself from the unpleasantness emanating from G's playlist) Since I couldn't listen to these great tracks at the time, I thought I'd post them today. And then I'll take my blogging break. Maybe ;)

As I've mentioned before on this blog, pretty much all of my favorite female celebs can sing - and some have even reached #1 on the Billboard charts (is there anything Anna Kendrick can't do?) I'm excluding them for this exercise.

My personal playlists are often peppered with single tracks from female-fronted acts. Not all of them are one hit wonders. Sometimes I only like one of their songs, or I haven't downloaded more than one. That said, I highly recommend any/all of these tunes:

Not really a lead singer, but..

When I was a young lad, Smashing Pumpkins were my favorite band. I thought it was cool that the bass player was a girl. There didn't seem to be too many girls in rock bands at the time. My fellow Pumpkinheads and I really wanted to like D'arcy. But she always looked so disinterested. She didn't contribute all that much (although Billy Corgan's massive ego could be to blame) and didn't join the fairly recently reunited Pumpkins lineup.

Nikki Monninger of Silversun Pickups is the bass player I always wished D'arcy would have been. She's a lot more fun to watch than D'Arcy ever was, contributes a lot more to her band, and she's just plain better at playing bass. Also, Nikki can sing quite well when called upon. Here's their brand-new cover of Martika's "Toy Soldiers":


A couple of years ago I bought a big box of CDs (and cards) from Gavin at a great price. There was so much music included that I might never get to it all, but I gave Metric a spin. Until then I'd only heard "Youth Without Youth." I'm now familiar with about a dozen more tracks, and I'm not quite all-in on all of it but I am sold on Emily Haines for sure.

There was a time when I was into Paramore about as much (if not more) than I liked Fall Out Boy. Then Hayley Williams started doing solo projects, the Farro brothers left, and the band had to convince skeptics that they were still a band. The last Paramore single I liked was "The Only Exception" but everything up to that point was amazing.


Three summers ago I was at a wedding for one of my wife's best friends and I heard a song that sounded like classic Paramore. But it wasn't anything I'd heard before and the vocal packed more punch. As I soon found out, this wasn't Paramore - it was Pvris.


Pvris was the opening act for 30 Seconds To Mars/Muse when we saw them at Jones Beach in New York. The Mrs. and I became fans almost immediately. I've never enjoyed an opening act as much as I did that day. Some of their songs are dark and depressing, and I'm not quite sure what they're going for on their new album, but Lynn Gunn is a force of nature.

After months of being beaten down by my manger's playlist I sought out cover versions of certain songs, to distract myself when I dislike the original artist. Lynn and Pvris covered Sia's "Chandelier"and absolutely crushed it:

Who are some of your favorite female musicians? Have you heard any of the tracks on my playlist? I'd love to hear your thoughts on these artists, or your own recommendations, in the comments.

Email ThisBlogThis!Share to TwitterShare to FacebookShare to Pinterest
Labels: music