Now that I'm officially a four-sport card collector again, I've been wondering which legendary players are missing from my collection. The All-Time Teams series and its frankenset companion created a checklist of baseball greats whose cards were (and were not) in my binder. That got me curious about the other major sports - and all sports in general.

Let's start with The Greatest: 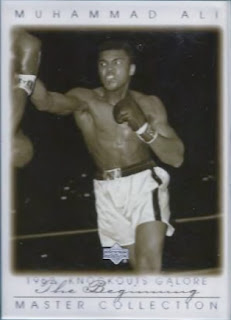 I do not have a Muhammad Ali card. I've never really seen boxing cards nor known anyone who collects them, so I was surprised to learn that Ali has 1,567 different cards. Based on his status as an icon, an activist, and arguably the greatest athlete ever, I should probably try to add one of his cards to my collection at some point.

There are a handful of soccer/futbol cards in my collection, though none of the players depicted would be considered all-time legends of the "beautiful game." That means I'm missing the greatest athlete of the 20th century, at least according to Natalie:


I did search for Pele cards on COMC a couple years back, but didn't see anything I liked for the meager amount of money I was willing to spend. (btw, I do have a Jim Thorpe card.) 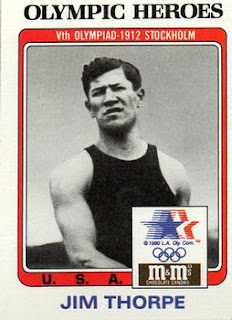 Olympic sports have produced scores of legendary athletes, and I have a handful of Olympic cards in my collection. However none of them are all-time legends like Jesse Owens, Carl Lewis, Michael Phelps, and Usain Bolt. Bolt would be the toughest to track down; he has just nine cards. 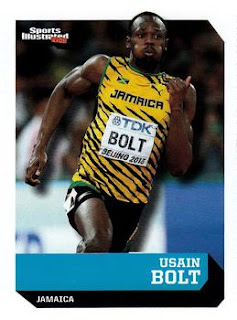 Tennis, anyone? I have a Serena Williams Sports Illustrated For Kids card, and an Arthur Ashe Flashbacks insert from the 2017 Topps Heritage baseball set. Someday I might endeavor to add Roger Federer, Martina Navratilova, or Chris Evert cards (I'm almost certain I had this one as a kid.) Pete Sampras is perhaps the greatest modern athlete with an August 12 birthday so I'd put him at the top of my tennis wantlist. 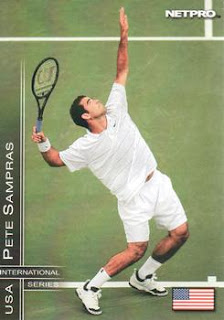 Golf, auto racing, and fight sports do not interest me at all. Tiger Woods, Jack Nicklaus, Arnold Palmer, Richard Petty, Dale Earnhardt, and Jeff Gordon are not represented in my collection but I wouldn't say they're "missing". I have no idea who the big MMA stars are - other than Connor McGregor and I think he's more of a showman than a superstar. Does Bruce Lee have any cards?

Obviously the "big four" North American team sports rule the roost 'round here, and since Topps, Panini, and Upper Deck often include Hall of Famers in their current sets there shouldn't be a long list of all-time greats missing from my baseball, football, or hockey card collection. There are probably a few basketball legends I'm missing since I wasn't buying NBA cards for about 20 years.

To find out which Hall of Famers I need to add to my wantlist I consulted each sports reference page and cross-checked it with TCDB. Here are the top five NBA players I'm missing, listed with their ranking on the all-time Win Shares list:

I'm not sure how well this works (I've never even heard of Bailey Howell) so I consulted ESPN's recent ranking of the top 74 players of all-time. The players I'm missing are:

That doesn't help much, but it tells me I need to add a Bob Pettit card to my collection. 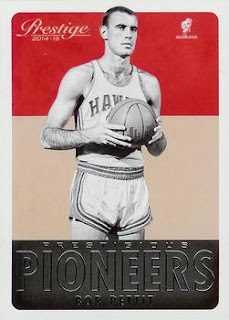 Football-reference uses Approximate Value to determine the greatest players across all positions - which comes in handy since it's tough for me to assess the impact of offensive linemen. Based on this metric, the top five NFL players missing from my collection are:

Again, I don't know how reliable this is. Phillip Rivers is 13th all-time in AV; Lawrence Taylor is tied for 26th. Let's just go with this list published by USA Today in February.

Btw, LT is ranked third on this list. I've been kicking the tires on his rookie card lately, which is a bargain compared to other players in the NFL's all-time top ten. Probably because of his off-the-field troubles (one reason why I haven't yet bought his RC.)

I'll have to dig deeper into the NFL's all-time greats at some point. 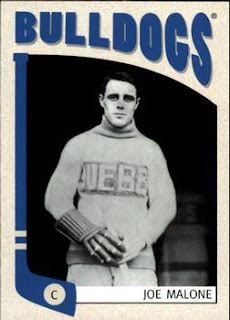 My hockey card collection is nearly twice the size of any other sport (though much of it belongs to my wife) and thanks in no small part to the 2004-05 In The Game Franchises set I've got at least one card of just about every significant NHL great - including the league's first scoring champ, Joe Malone.

Which brings us to baseball. The All-Time Teams project helped me identify Hall of Famers that were missing from my boxes and binders, such as Hank Greenberg and Billy Williams. They've since been added to my collection, leaving a few pre-war HOFers left to acquire.

My baseball bias led me to believe that WAR was more accurate than the catch-all stats used for other sports. Now that I've found oddities in the football and basketball lists I'm looking at WAR a little differently. For example, the top five players missing from my collection are:

A casual baseball fan would see this list of pre-war players and wonder how Kid Nichols could rank higher than Lou Gehrig (18th), Mickey Mantle (21st), and Greg Maddux (27th.) The 19th-century ace of the Boston Beaneaters is now the highest-ranked player missing from my collection - because my Beckett Marketplace order contained an Eddie Collins card: 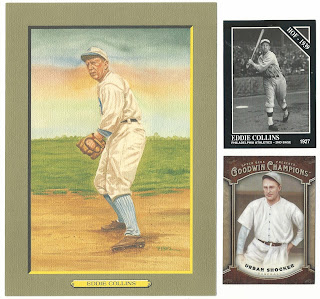 Technically I already had a Collins card, but this Perez-Steele Great Moments issue is the size of about four standard singles. This Conlon Collection card, along with the Urban Shocker underneath, are the latest additions to my All-Time Teams binder.

Which great athletes are missing from your collection? Do you have cards of transcendent sports stars even though they play sports that you don't follow?