The Final Four - COMC Comes Through

With all of the recent changes in the sports card industry (and my dwindling interest in baseball) it seems like a good time for me to announce my retirement from baseball card collecting and blogging at the ripe old age of 41. I'm not going to stop collecting cards forever but I do plan to complete as many card sets as I can by the end of 2021 and then I'll stop actively buying trading cards. I might continue passively collecting - but the days of spending multiple hours per day on this "hobby" are coming to an end.

I've published 496 posts here at The Collector so I'll squeeze out four more and stop at 500. I've also got one more post planned at The 1993 which will be my 45th published post at my sister blog I'm ashamed of myself for not even getting close to 93 posts. After that I'm probably going to wrap it up.

Again, if the mood strikes I might post a little more here and there. But it wouldn't be about cards - and I doubt anyone wants to read random musings about my everyday life, like how my co-worker has had several "dentist appointments" this month which are secretly job interviews and only a couple of people in the office know this. And tomorrow I have an actual dentist appointment - which I have to leave early for. Can't wait to tell 'em why. 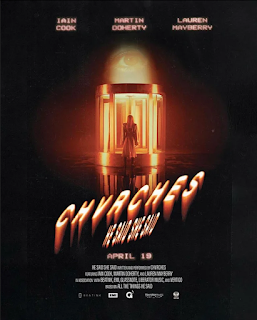 Also I've been listening to a lot of Chvrches lately and I'm really bummed because they are playing a show in my hometown of New Haven!! Good bands never come to New Haven anymore!! And tickets are only $40 or so. Problem is, the show is on a Thursday. In December. :/

While I'm on the subject I've been having this dream of hearing them play "Death Stranding" outdoors at like 4 in the morning, and Office Girl is with me and we're like Nick and Norah at the Where's Fluffy? show and it just feels like bliss. I bought two Chvrches CDs this summer and "Death Stranding" isn't on either of them and this is a huge oversight on my part. I must download this song immediately.

See, I'm much more interested in discussing music, but every time I do I get the same "that band/artist/song sucks" response so I'm not going to do that. This is a sports card blog, after all.

At the beginning of April I requested COMC ship 32 cards to me. And they did so - four months later. 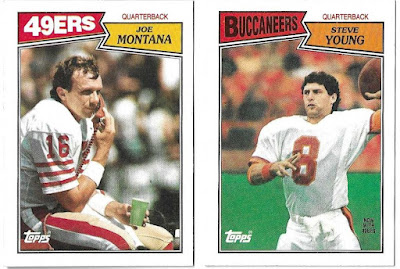 These two legendary 49ers quarterbacks were the last cards I needed to complete the 1987 Topps set. Joe Montana cost 85 cents and Steve Young set me back $0.69. There are a handful of singles in this set that I wouldn't mind upgrading, though not as many as the condition-sensitive '86 set. It's another reason why I won't be able to completely stop collecting cards on December 31, but I'm going to do as much as a I can to tidy up my set builds - even if they're complete. 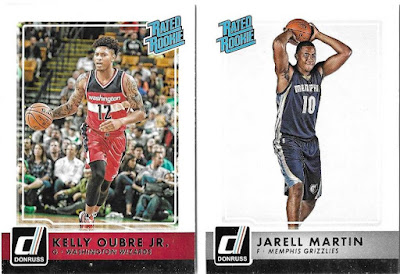 2015-16 Donruss basketball is finally complete, thanks to these two rookies. Kelly Oubre cost $3.75 I'm still amazed that I was able to get the Nikola Jokic RC for less than that while Martin was a more manageable 60 cents.

I have now completed nine basketball sets, though only six of them have enough cards to qualify - and this is the only one released after 1993. 1992-93 Topps Archives will soon be the tenth completed set, and then I guess I'll try working on those starter sets Bo sent me.

One more set filler for today. I'm still trying to collect all of the 2017 Topps Heritage inserts though I will probably have to give up the Game. Aside from those, I only need four more: 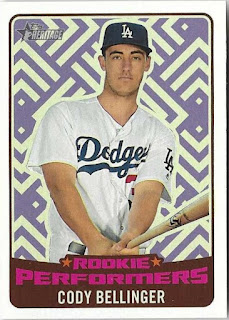