For those of you who don't collect hockey cards, you probably haven't seen what Upper Deck has been doing over the past decade or so.

Are they filling their sets with dozens of parallels like Panini? No. (well, maybe just Artifacts)

Are they adding dozens of photo variations in their flagship set? Yes.

In some ways, Upper Deck is to hockey cards what Topps is to baseball cards - an iconic brand whose quality has deteriorated due to lack of innovation/motivation/competition. However, there is one major difference between flagship Upper Deck hockey and flagship Topps baseball.

Upper Deck's rookie cards are a brand unto themselves. Short-printed but not serial-numbered. Valuable but attainable. Young Guns are one of, if not the only, type of hockey card that stands out over baseball, football, and basketball cards. There is no equivalent in any retail-level product produced by Topps or Panini.

The label gives rookie cards added significance over the veteran base cards in each year's set, even greater than "Future Stars" or "Rated Rookie" labels once did. Yet every single RC in every single flagship Upper Deck set receives this distinction - from the most hyped prospect of his generation to a 33 year-old minor leaguer finally getting his first/only taste of NHL action. The brand itself is 33 years old, but in its infacy there was little indication that it would stand out among Upper Deck's other subsets.

In fact, the Young Guns subset disappeared from the flagship hockey set for several years, only to return at the end of the 1990s. Let's take a look at the humble beginnings, quirky facts, and circumstances that made Young Guns rookie cards the go-to subset for hockey card collectors. 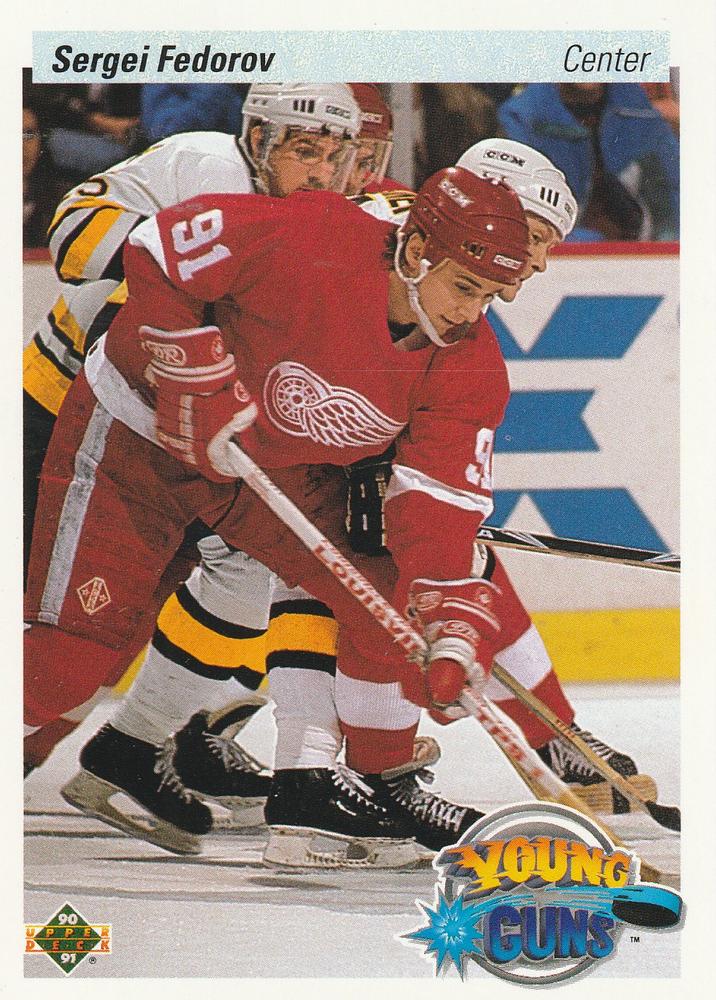 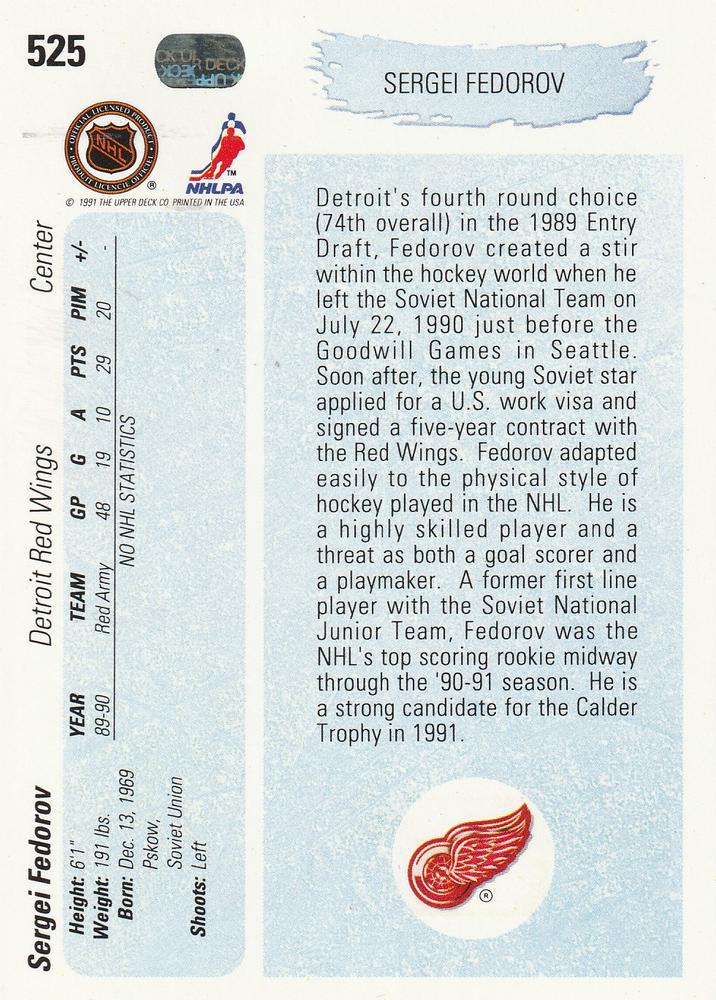 The first Young Guns subset was part of the High Number series. Just fifteen players, plus a checklist - and the checklist wasn't in sequential order (the players were listed alphabetically by last name.)

Who's that guy? Stephane Morin was the only member of the OG YG class to suit up for less than 100 NHL games.

Forgetting someone? Upper Deck's initial NHL offering includes several rookie cards of Hall of Famers and stars within the 550-card set. Mike Modano, Ed Belfour, Jaromir Jagr, and Mats Sundin appear in non-Young Guns portions of the set. But, while UD proudly included the Top Ten Draft Picks of 1990, they should have gone a bit further. 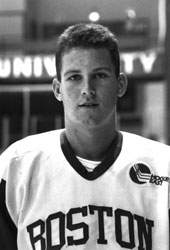 This young goalie, however.. 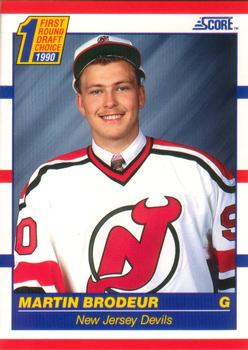 Only Score had the foresight to include #20 overall pick Martin Brodeur. Upper Deck would fix their mistake. 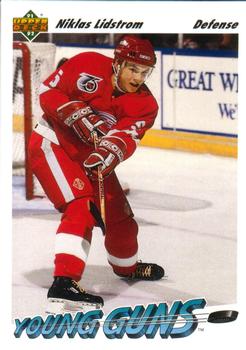 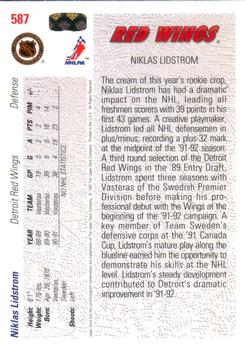 Now competing with the likes of Parkhurst and Pinnacle, Upper Deck increased the size of their base set to 700 cards. Eric Lindros, Peter Forsberg, and Teemu Selanne appeared in series one, along with Nicklas Lidstrom - who made a repeat appearance as a Young Gun. Once again, this high-number subset featured fifteen prospects plus a checklist with players listed in order of their last name, not in order of appearance in the set. 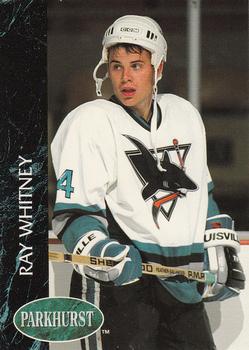 Forgetting someone? Ray Whitney and Bill Guerin were overlooked by nearly every card company in 1991-92. Whitney made his NHL debut at the tail end of the season. Guerin, the 5th overall pick in 1989, played two games in February 1992 and three more in March. Both players were included in Parkhurst's Update set - but not Upper Deck's. 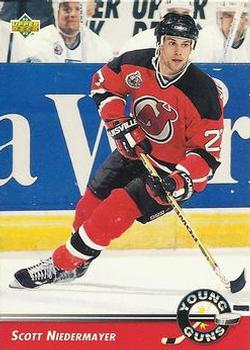 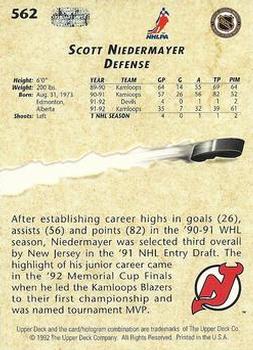 Upper Deck's base set shrank (somewhat) but the Young Guns section doubled in size. The 30-card subset stood out from the base design more than in the prior two years, and the checklist listed each card in sequential order. However, most of the players had appeared in earlier Upper Deck sets.

Who's that guy? Viktor Gordiuk played 26 games for the Sabres over two non-consecutive seasons. Guy Leveque filled in for an injured Wayne Gretzky with the 1992-93 Kings.

Forgetting someone? At this point, the Young Guns designation closely resembled the 'Future Stars' banner on Topps baseball cards. With that in mind, it's a little curious that Sergei Zubov got a plain old base card, while fellow Rangers Kovalev and Steven King got heralded as players to watch. One of these three players was beginning a Hall of Fame career. The other two... were in the Young Guns subset. 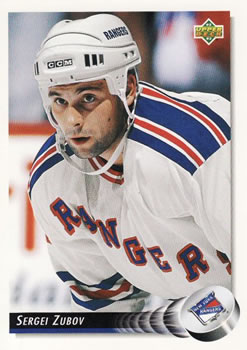 As a young collector, I was already associating 'hot' rookie cards with one specific subset. 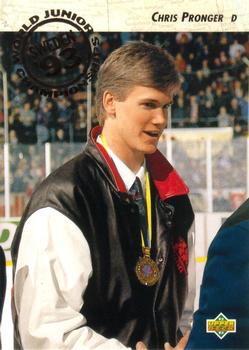 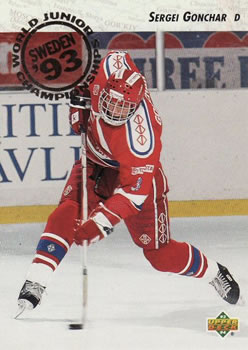 The circular World Junior Championship stamp at the top left of the card was a more reliable indicator of a rookie prospect than the Young Guns banner at the bottom. The WJC subset immediately followed Young Guns in 1992-93 flagship Upper Deck and pushed them out of the 1993-94 set entirely. 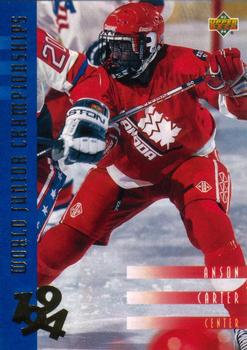 After a two-year hiatus the Young Guns returned - but not to the flagship set. 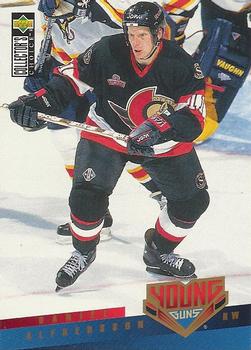 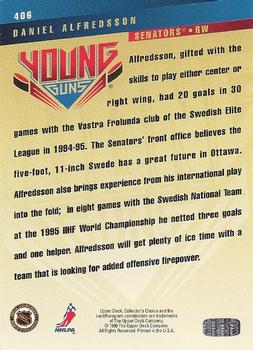 *This Young Guns subset was available via redemption/trade card only. While the card numbers indicate an extension of the base set, TCDB lists these as inserts - which means they're not official RCs.

Upper Deck continued this practice the following year. The trade card was a tougher pull the second time. 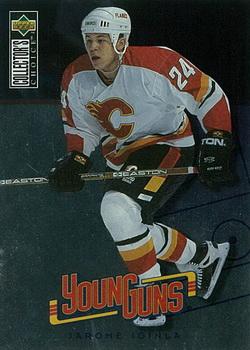 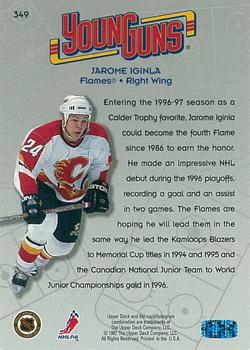 Despite the subset's identical availability, TCDB lists the 1996-97 Young Guns under the Collector's Choice base set - but not the 1995-96 YGs. A third edition would settle this once and for all.

But Upper Deck didn't add Young Guns to the 1997-98 Collector's Choice set, as either a mail-in or a part of the base set. Nor did it make in appearance in 1998-99. The label was fading into obscurity. 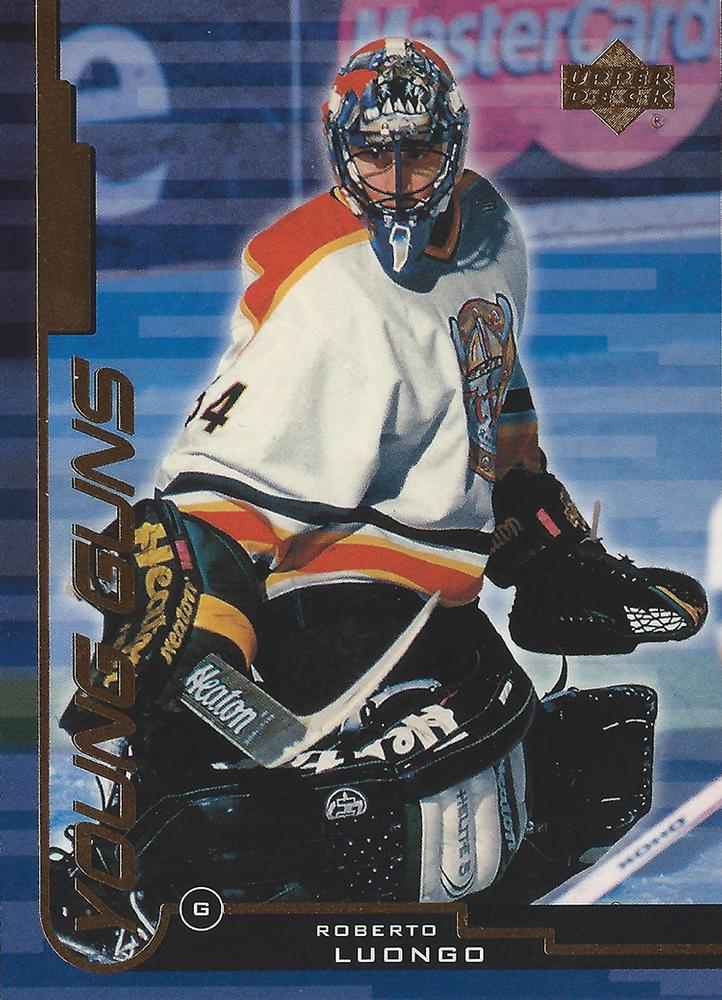 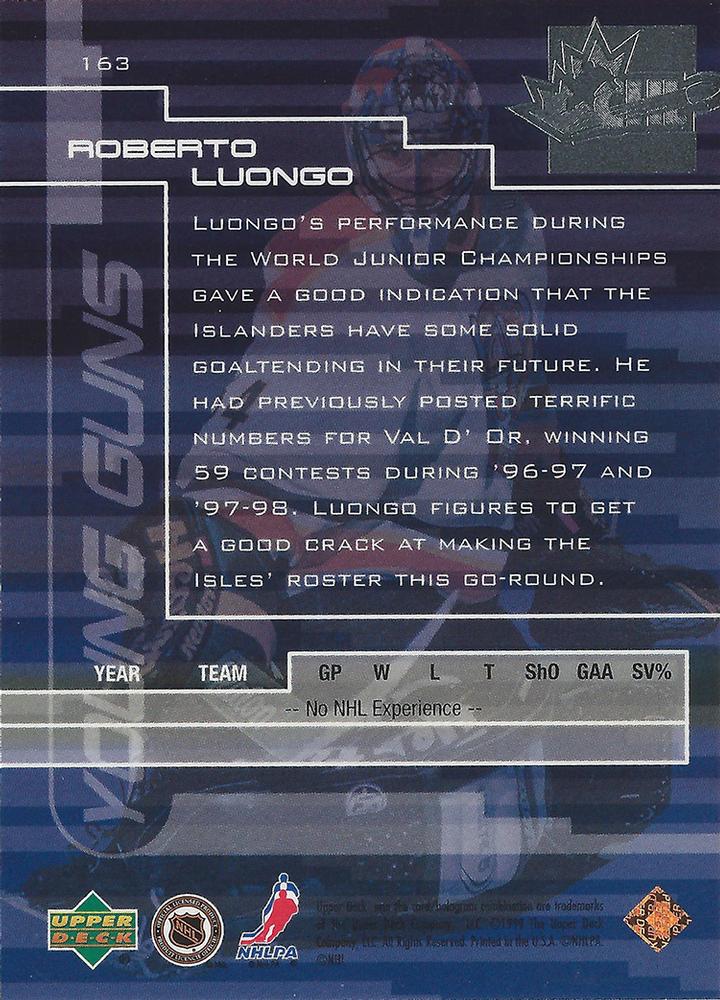 Young Guns are back, just in time for the new millennium. And they're about to change hockey card collecting forever.