I've got so many cards incoming that I wanted to take a few days off before blogging again .. but the the Devils had to go and make a blockbuster trade, sending forward Adam Henrique to Anaheim in exchange for defenseman Sami Vatanen. 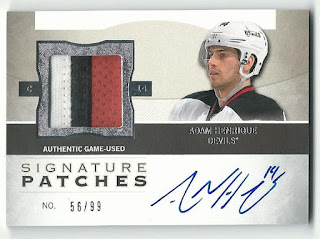 The trade addresses glaring needs for both clubs - New Jersey is desperate for a top-4 defenseman and Anaheim is shorthanded at center with injuries to Ryans Getzlaf and Kesler. 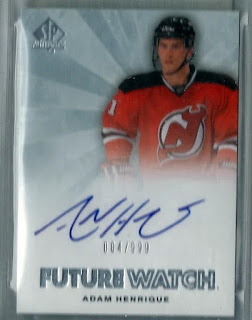 Henrique hasn't been producing at the level that Devils fans had hoped for - he's only got 4 goals this season and he's been passed on the depth chart by a slew of younger, cheaper forwards. Still, it's tough to see "Rico" go. He was a fan favorite, a guy who made a long-term commitment to the team at the bottom of a rebuild, and was traded for a defenseman just as things were starting to look up (sounds a lot like Taylor Hall.)

Henrique and Hall were junior teammates on the Windsor Spitfires, which explains the Panini Prime card pictured below. They weren't quite 'fire' together in Jersey, but Hall cited Henrique as someone who helped acclimate him to the Devils and New Jersey. 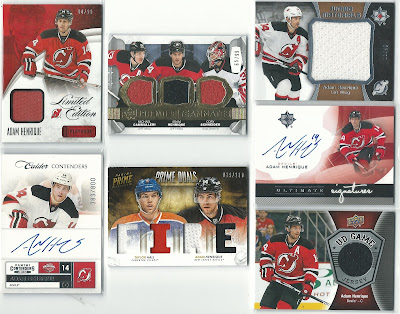 The last five years have been among the worst in Devils franchise history, and Adam Henrique has been one of their best players over that stretch. As a result, his hockey cards have been plentiful and affordable. I almost picked up a second copy of that Jumbo Materials jersey last week; there was one on COMC for $2.05. 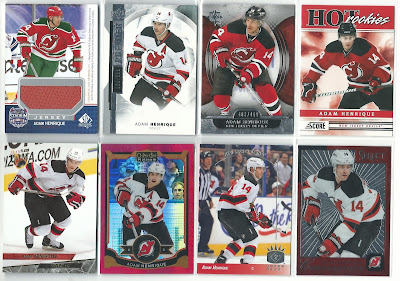 I've got plenty of Henrique cards in my collection as you can see, and I kept this in mind while doing my Black Friday shopping. Adding another Adam wasn't a priority for me - but this incoming card was too good to pass up: 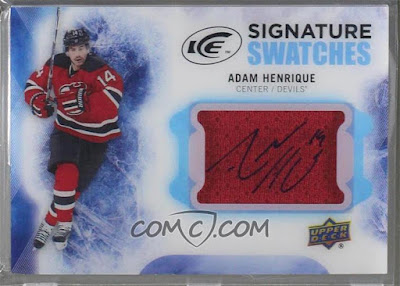 This Ice auto cost just $3.45 on Black Friday, due to surface wear, edge wear, and corner wear. I guess we'll see how severe it is in a week or two.


It has been a surprisingly solid year for the Devils so far - and Sami Vatanen will surely boost the blueline. But I doubt he'll score a series-clinching OT winner:

Thanks for everything, Rico. Good luck in Anaheim!