Baseball News (and a Major Announcement)

A lot happened in baseball over the past three days. Shohei Ohtani passed up bigger markets and more money to play with Mike Trout and co. in Anaheim, which seems unusually honorable to most fans outside New York.

The New York media didn't see it that way:

Better than being called a "fat, pussy toad" I suppose.

Yankees fans may have felt rejected by the "next Babe Ruth" but the Cash-man more than made up for it by acquiring the current Babe Ruth, Giancarlo Stanton. The 2017 NL MVP slugged 59 homers last year - the highest single-season total of any non-Yankee who didn't use PEDs (allegedly)

Fortunately for the Bronx Bombers, Big Mike was brave enough to accept the challenge of playing in New York City. It will cost them 1/4 of a billion dollars, but the Yanks had to address their glaring need for a power-hitting right fielder. 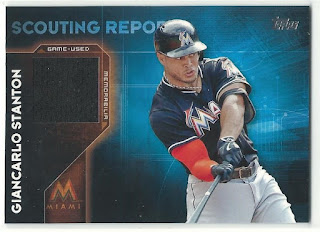 Not to sound bitter, because I really didn't want the Red Sox to trade for Stanton... but what if David Ortiz were running the Marlins? Would he send the reigning NL MVP to Beantown for, say, Jackie Bradley and a bag of balls? Would everyone be cool with that? It's a moot point; Stanton had a full no-trade clause and he used it wisely. But I would have liked to see him say "yes" to San Francisco. Giant-carlo would have been marketing gold.

Away from all the Hot Stove action, Jack Morris and Alan Trammell were elected to the Baseball Hall Of Fame by the Modern Era Veterans Committee. Though Morris fared better than Trammell on the writers' ballot (and on the veterans' ballot), his selection has been panned by most baseball experts. 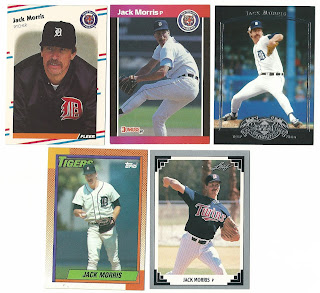 I'm not going to quibble with it. I don't think of myself as a 'big Hall' guy, but I'd say there are about a dozen more deserving players still waiting for the call (including Ted Simmons, who was one vote short on the Modern Era ballot) And I dislike the notion that electing Morris or Jim Rice or Bill Mazeroski somehow lowers the bar and cheapens the honor. If that makes me a 'big Hall' guy, then so be it.

I think I have a Jack Morris Starting Lineup figure somewhere; the dealer who sold it to me more than 20 years ago told me at the time that Morris would be a Hall of Famer. I also have about a dozen Tigers cards to pull out of my commons binders and add to my Star Player/Hall Of Famer box: 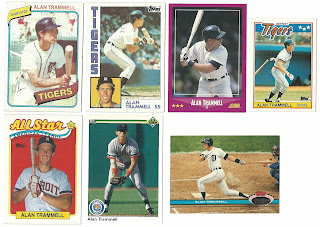 My card collection is a mess right now, with hundreds of cards from Gavin still unsorted and most of my COMC order unsorted and unscanned. I also have a huge Dave and Adam's order on the way - half cards, half supplies - paid for with my not-yet-received Christmas bonus. Hopefully all of this will keep me busy well into 2018, because I have given myself a challenge. In an attempt to focus on other, long-neglected aspects of my life...

I am announcing my plan to spend no money on sports cards for one year.

This might be the hardest thing I've ever done. I might get depressed or frustrated with some aspect of my life and buy a blaster box of Upper Deck hockey two weeks into January. I might last until August and then spend all my birthday money on renewing my PSA membership (the only exception I would allow myself, btw) The last year that I did not spend any money on sports cards at all was 1985 -- and that's because I was five years old. 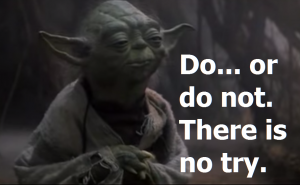 So I've built up a war chest of cards, a list of topics to blog about (Friday feature coming soon) and a list of things I want to do with the time/money I would otherwise spend on sports cards. My initial idea was to merge my two blogs into one and call it "A Year Without Cards" or something, but now I'm leaning towards renaming my other blog and putting all of those posts there. I've got more than enough ideas for both blogs - assuming I can stay motivated.

Would anyone be interested in reading my journal-entry posts about what I might be doing instead of obsessing over baseball cards? Should I keep the topics on separate blogs, or merge them together here? Any feedback would be helpful and appreciated.

Also, I don't know what to call my weekly series of posts about my recent COMC order: 500 Friday? Fridays with the 500? Five Hundred Card Friday Feature? I thought of a cool name for it on my way home from work...but then I forgot. Any suggestions?