How was everyone's Christmas? I hope you all had a wonderful weekend with your families. I can see from my blog roll that a lot of you got some great sports card gifts - though it helps to have an adjacent birthday ;-)

I wasn't expecting any sports cards this year - and I didn't need any since my COMC and Dave & Adam's purchases will keep me occupied well into April. My mom gave me a fat pack of 2017-18 Upper Deck MVP hockey when I saw her last week. I opened it right away and thus did not scan the cards. (The "three stars" were a Dallas Stars rookie, a checklist Sidney Crosby, and a Patrick Kane base card.)

My father in law used to pick out a repack box for me every Christmas, and at first I'd silently grumble because it would have been so easy to just pop in to Target and pick anything with a current year on it... but it was neat to get packs of baseball cards from years I hadn't been collecting. And it's the thought that counts, right? Which is why I was so happy that my daughter bought me a pack of cards for Christmas. 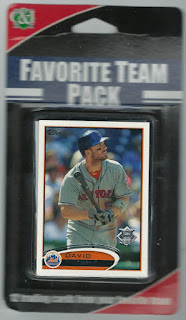 Sorry for the super blurry scan; the bottom reads "12 trading cards from your favorite team"

The "Ny Mets" aren't exactly my "favorite squadron" but my daughter doesn't really know teams yet. And the selection of decent gifts at those holiday shops are so sub-par that my wife cautioned them about wasting money on things neither one of us would use.

Good news: The David Wright was from an NL All-Star team set so it wasn't a dupe.
Bad news: As the top card in a very loosely packed pack, it has multiple corner dings.

I've never heard of Jason Anderson but that's a nice shot of the center field seats at Wrigley. The Beltran is a dupe - or so I thought. It's the Mets team set version, as are the Putz and K-Rod below. 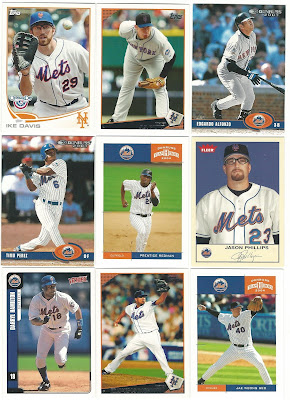 Here's the rest of the pack. Timo Perez was a fan favorite - at least the Mets fan I knew. Darryl Hamilton did some work for the MLB network before passing away in 2015.

I will definitely put these cards to good use, but I hope she didn't spend more than $1 on them.


Around 1pm we headed to my in-laws so my girls could be buried by another avalanche of Xmas gifts. My sister-in-law's husband Ant had to work overnight last night so they had to leave early. We talked a little football, he's an "Iggles" fan and I'm a Packers fan so we shared a little misery over our starting QBs being injured. And then he tossed me a wrapped package that felt like about six to ten packs of cards.

I was wrong. This was what was underneath the wrapping paper: 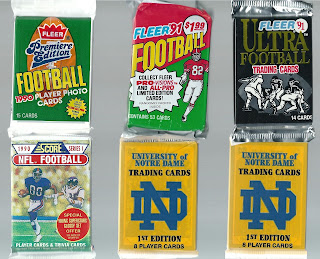 Wow. Just..wow. Where on Earth did they find such a godawful repack? No Upper Deck? No Pro Set? I actually would have preferred Pro Set. Notre Dame cards? I wouldn't even know who any of these guys are. 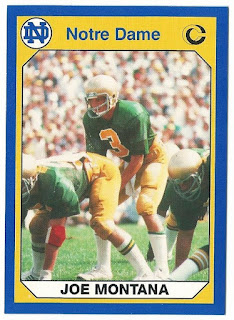 As for the rest of the packs... 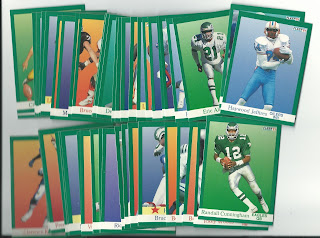 Eeek! So much green! '91 Fleer Football is only marginally better than '91 Fleer Baseball.

Here are the "highlights", including an off-center Elway dupe. 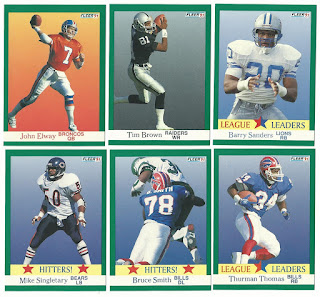 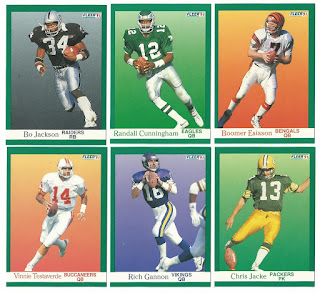 Okay, so Barry and Bo aren't bad. The Jacke is the only Packer in the pack, and it's a dupe. "Vinnie" is spelled correctly on the back. 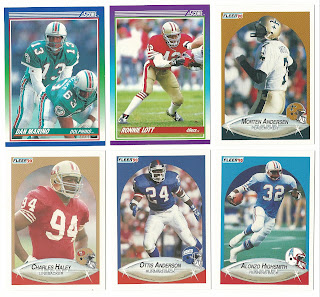 Advantage: Score. I had hundreds of cards from both these sets back in the day; there were Fleer team sets in hanger packs at all my local Walgreens, Stop & Shop, and Toys R' Us stores. 1990 Fleer was so much sharper looking than 1991 Fleer.

An insert! I didn't think it was possible. Of course I got the wrong Falcons rookie, and the Query is a dupe (What can I say? I have a ton of 90's Packers cards) but it's par for the course.

I shouldn't complain. It's the thought that counts, right? I just hope that my in-laws didn't spend more than $1 on these.


Next time I promise I'll have some much better looking cards to scan and discuss. Thanks for reading!