The Collector's Sports Card Tour kicks off our final month in California's capital. Today we're in Sacramento, home of the NBA's Kings. 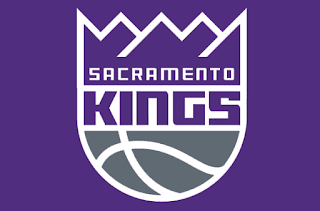 The Kings have an NBA championship in their history, but it's waaaay back in 1951 when they were the Rochester Royals. In the sixty-seven seasons since, the franchise has moved from Rochester to Cincinnati to Kansas City (and Omaha?) to Sacramento.. and nearly to Seattle.

Former NBA All-Star Kevin Johnson never played for the Kings but he was instrumental in making sure the franchise stayed put - as mayor of Sacramento. (If only Hartford or Atlanta had a former NHL All-Star as mayor.)

Hall of Famer Mitch Richmond is arguably the greatest player in Sacramento Kings history. My best friend at the time was a big fan; he called Richmond "Mitch the Bitch" but he meant it as a compliment. (Sorta like saying "that guy is a mother f*cker!") All of my Richmond Kings cards are part of subsets - my favorite of these is the Arco Arena art. 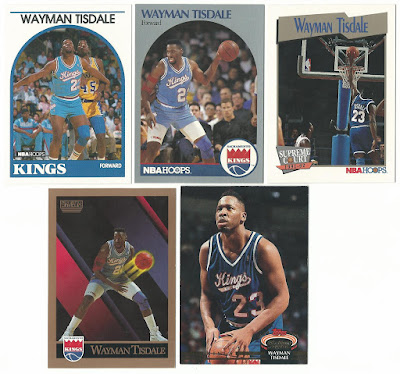 Wayman Tisdale was one of those small-market stars I was drawn to, based largely on the back of his trading cards. I don't think I ever saw him play - Sacramento never made the playoffs with Wayman, and I didn't watch any west-coast regular-season games as a tween - but I remember pulling for him to make the All-Star team (he never did.) 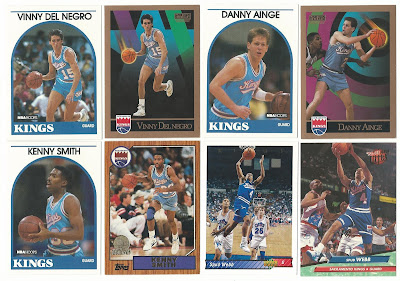 Familiar names in a not-so-familiar uniform. I never thought of any of these guys as true powder blue Kings - Del Negro was a Spur, Ainge was a Celtic, Kenny "the Jet" was a Rocket, and Spud was a Hawk. If I'm wrong, I'm sure someone will let me know ;-)

Ralph Sampson is in my stars/HOFers box but I didn't add him to my Basketball Stars Master List. I almost bought a Bobby Hurley jersey in a sporting goods store, when the Kings switched to black-and-purple uniforms. Wasn't enough of a Hurley fan to buy one though (maybe if Wayman Tisdale was still on the team..) The Upper Deck Hurley is the newest Kings card in my collection - courtesy of Brad's box. 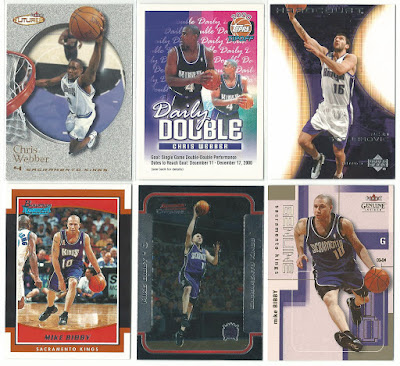 The Kings' most memorable season was 2001-02, when they lost to the Lakers in a heartbreaking seven-game Western Conference Finals series. Chris Webber might be a Hall of Famer had that series turned out differently. I don't have any Vlade Divac Kings cards and only one Peja Stojakovic. Mike Bibby is looking jacked lately.

Now I remember why I stopped watching basketball. 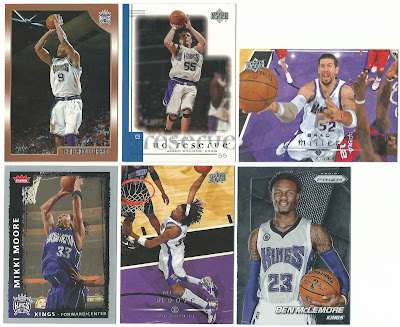 Some of my best base cards (The Mikki Moore UD is my favorite.) Tariq Abdul-Wahad (born Olivier St-Jean) was the first French player in the NBA. Jason "White Chocolate" Williams was a high school teammate of NFL legend Randy Moss.

How do you classify cards such as these... 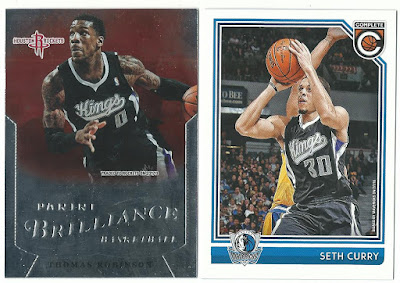 I've seen a couple of you go by the logo (e.g. Robinson is a Rockets card, Curry is a Mavericks card) but I go by the photo. These are Kings cards in my book. Literally.

Same for this Patrick Ewing Jr. card. It says Rockets..but I see Kings. The Ricky Minard Chrome caused a different problem. I got it in a repack and initially thought it was an Orlando Magic card for some reason. Guess that Summer League jersey threw me off. 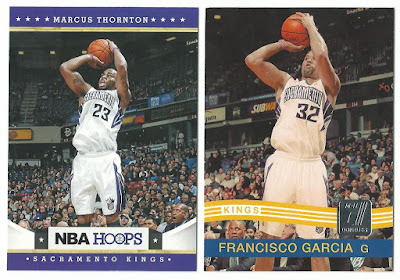 I don't know anything about these two players.. I just wanted to point out that the Garcia card has Stadium Club-quality gloss on the front and a junk wax-era Donruss feel on the back. Also, the photo looks much clearer on the lower-quality Hoops card. 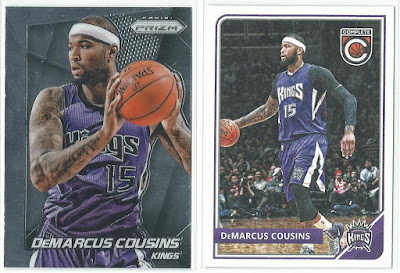 DeMarcus Cousins was traded to New Orleans in 2017 after 6 1/2 tumultuous seasons in Sacto. "Boogie" is a beast when his head's screwed on straight - but he has yet to play a postseason game. 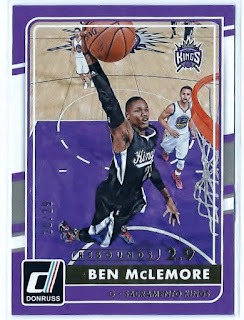 My best Kings card is this Ben McLemore Rebounds parallel. I bought this and two other '15-16 Donruss parallels on COMC last March. It's the lowest numbered (#/29) and most expensive (95 cents) of the three. (The others were Michael Kidd-Gilchrist and Michael Carter-Williams - both 55 cents)

That's it for the Kings portion of this post... but did you know that Sacramento had another pro sports team? (I'm not talking about the minor-league River Cats, though I wish I could.) 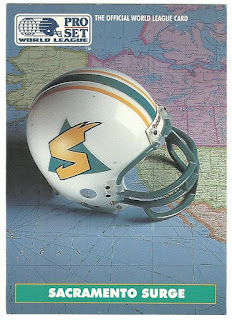 The Sacramento Surge won the World Bowl in 1992, the second and final year of the World League's existence. I had a bunch of Pro Set WLAF cards in my collection back in 1991 but this is one of only three that I've held on to. Probably because it reminds me of the soft drink.

I've heard that Surge is back on the market but I haven't found it yet. Has anyone tried it? How does it compare to Mountain Dew?

One final note about the Sacramento football team..they didn't have any recognizable names in 1991, but that 1992 championship squad boasted big names like ESPN analyst Louis Riddick, Pro Bowl defensive end Michael Sinclair, and this guy:

I couldn't find a photo of pro wrestling superstar Bill Goldberg wearing this jersey - and both card companies that produced WLAF sets overlooked him. Bummer. That would have been a killer card.

Next tour stop: meet me in St. Louis


Thanks for reading! And Happy Canada day to my northern readers!