We're coming down the home stretch - just nine stops left on the Sports Card Tour. The next three cities are in California, starting with today's stop in San Diego.

The Padres are San Diego's only pro sports team. They were National League champions in 1984 and 1998. 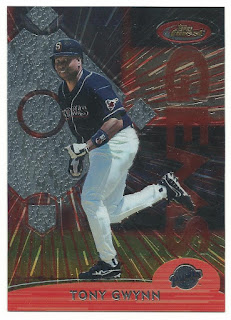 The legendary Tony Gwynn played on both pennant winners. "Mr. Padre" won eight batting titles and hit over .350 seven times. This 2000 Finest box topper is one of 26 Gwynn cards in my collection. 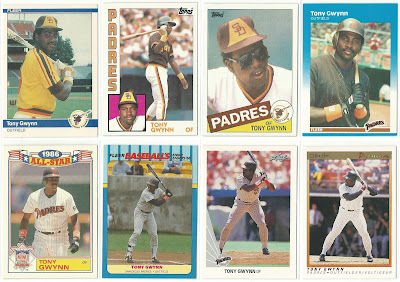 I don't have a Gwynn rookie card; there was once a coffee-stained Fleer RC in my collection years ago. Early-mid '80s rookies aren't yet a priority - they're still so abundant and affordable (aside from some update sets). The '85 Topps was part of a grab bag-type mystery lot I bought on eBay about 10 years ago. 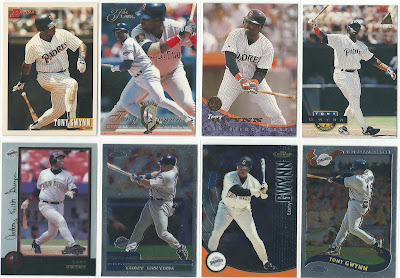 It always amazed me that Ted Williams hit .388 as a 38-year old in 1957. Tony Gwynn's 1997 season was nearly as impressive. He won his fourth consecutive batting title with a .372 average at age 37. Gwynn and Williams (who was a native San Diegan) became friends late in Ted's life. At the 1999 All-Star Game in Boston, every active player wanted to talk to Ted - but Ted wanted to talk to Tony. 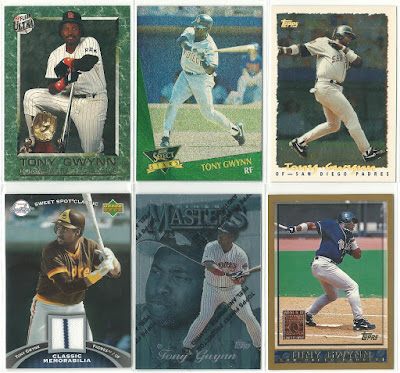 I only have a few Tony Gwynn 'hits', including a relic swatch that doesn't match the picture. The 1995 Topps Cyberstats parallel projected Gwynn's 1994 batting average as .391 had the season been completed. His average stood at .394 when the strike began (on my 14th birthday.)  The 1998 Topps Minted In Cooperstown card was one of a half-dozen such singles I picked out at a card shop.. in Cooperstown. It's likely classified as a base card but I give it the top loader treatment as if it were a parallel. 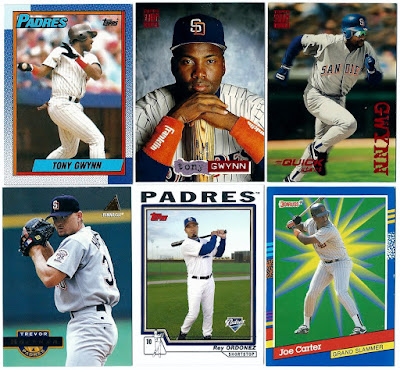 Some more Gwynn - and other Padres keepers - from Brad's box. The Rey Ordonez photo would fit perfectly in a Heritage set. 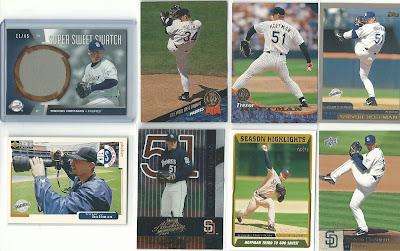 Trevor Hoffman will be officially inducted into the Baseball Hall of Fame this month. He was the first closer to save 500 games, and the only National Leaguer to save 600. The Sweet Swatch relic is numbered to 45. 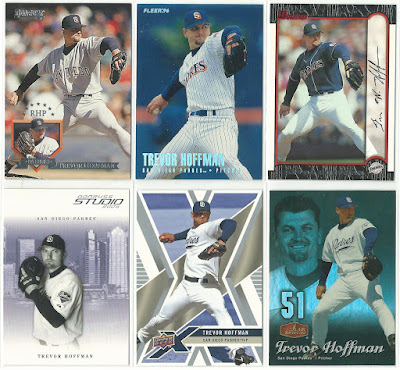 More HOF-man cards, including a 1996 Fleer Tiffany parallel. The flimsy, grainy base set was unbearable but the parallels really pop. 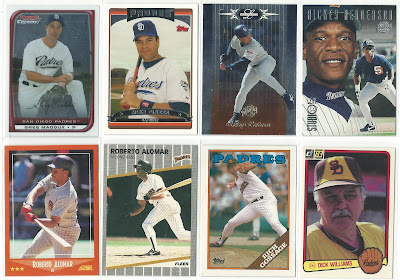 The rest of my Padre Hall of Famers, including a Score Traded Roberto Alomar XRC. Only Donruss thought to put Robbie in their main set-which made that card a hot item back in the day. I'd rather have the Score Traded (or Topps Traded) over that ugly '88 Donruss set. 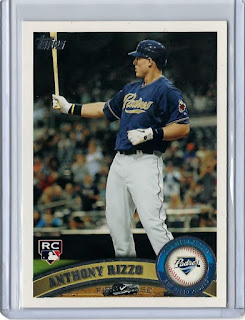 While we're on the subject of update sets...I tried to build the 2011 Topps Update set but couldn't get my hands on a Mike Trout RC before they hit triple digits. I broke up the set and offloaded every decent card except Anthony Rizzo. Huge mistake. I sold the Jose Altuve and J.D. Martinez cards for a fraction of their current value. (The J.D. will return to my collection soon.) 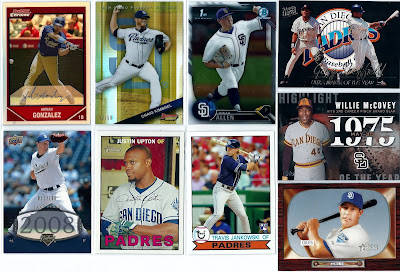 Assorted Friars from my hits box. The Craig Kimbrel gold refractor is numbered to 50; I added it to my 500-card COMC order last year for $1.30. I keep forgetting to ask Jon if he needs the Justin Upton Heritage high number (#445) for his set. [Jon, it's yours if you want it.] The Bowman Brian Giles is a base card I added to fill the white space. His brother Marcus (also a former Padre) was classmates with Gavin - who packed a ton of Padre cards into a box of CDs he sold me last year. 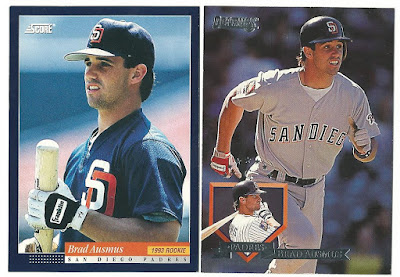 New Haven native Brad Ausmus wasn't a classmate of mine (he's a lot older than I am) but my 7th grade teacher told us he was one of her students. That was around the time he made his major league debut for the Padres, in 1993. 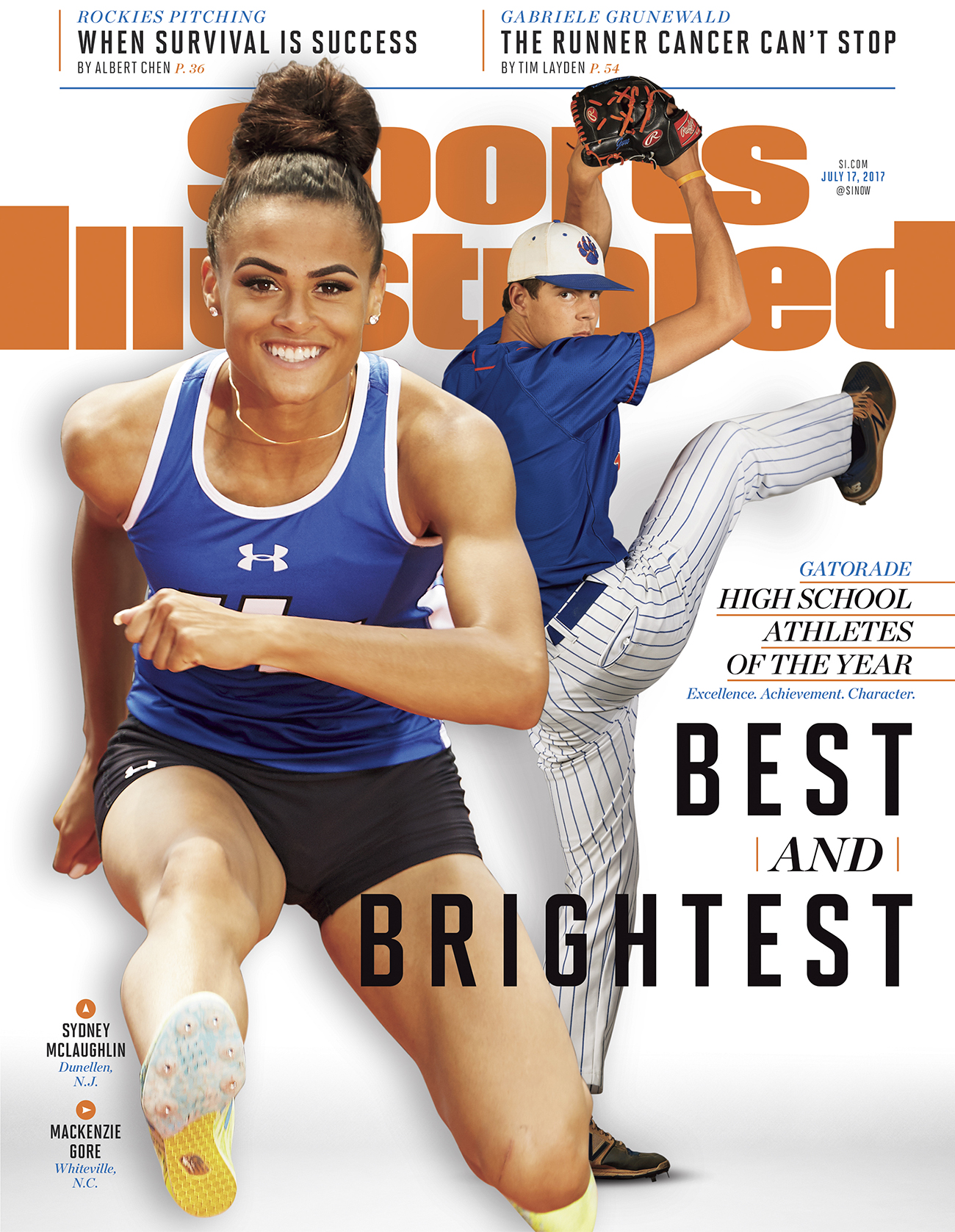 Padres pitching prospect MacKenzie Gore is from North Carolina, but Jersey girl Sydney McLaughlin attended high school right down the road from me, in the town where I work. If anyone has this Sports Illustrated issue, please let me know. I'd be happy to trade for it. 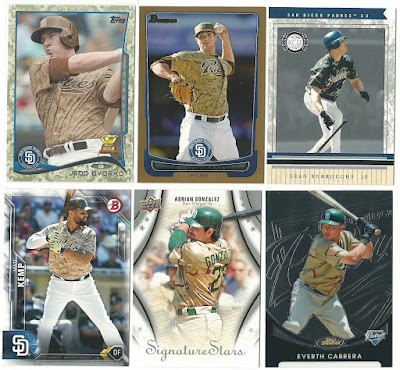 Camo Padres. The Jedd Gyorko was a seven-cent "dime box" find at the Milford card show.

Sparkly Padres. Pinnacle Museum parallels were a hot item back in the day. The Tejada Platinum Diamond was part of the flat rate randoms I bought on eBay. I didn't know what the Ben Davis was until writing this post, I had to look it up (it's a Star Power parallel.) 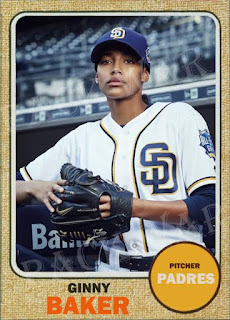 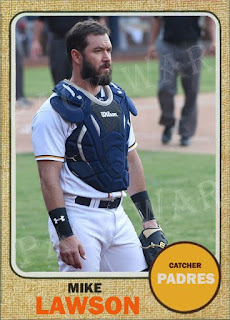 Fictional Padres. These customs are Corky's creation. I was a huge fan of the show Pitch and wanted to see the star of the show and the star of the team on one of my favorite vintage designs. (If I were a Pinterest person I'd 'pin' these to this page of custom card creations.)


Until recently San Diego was a two-team town. The Chargers played 56 seasons there, winning an AFL Championship in 1963. Lance Alworth was the star of that team, but I don't have any of his cards. 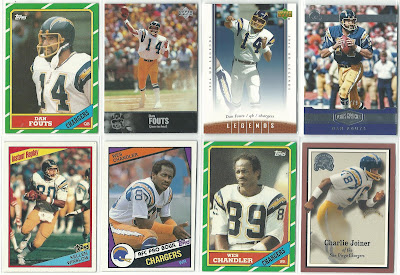 San Diego's passing attack was way ahead of its time. "Air Coryell" was implemented by Chargers coach Don Coryell and is used by many NFL teams today. Record-breaking quarterback Dan Fouts led the team to back-to-back AFC title games in 1980 and 1981. 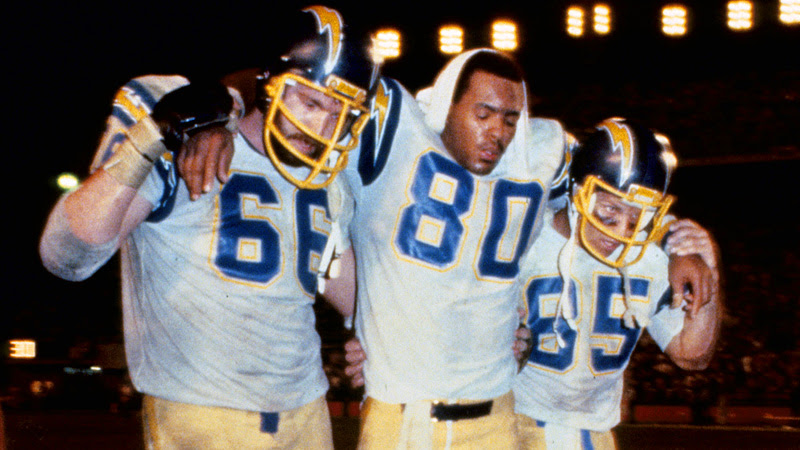 I've seen this iconic image of Chargers tight end Kellen Winslow about a dozen times. This was after the Chargers' overtime playoff win against the Dolphins in '81. The story I'm much less familiar with (and even more fascinated by) was that the Bolts' "reward" for winning that game was perhaps the coldest game in NFL history - an AFC Championship game in Cincinnati, in sub-zero weather. The "Freezer Bowl" had a wind chill of -37 F! 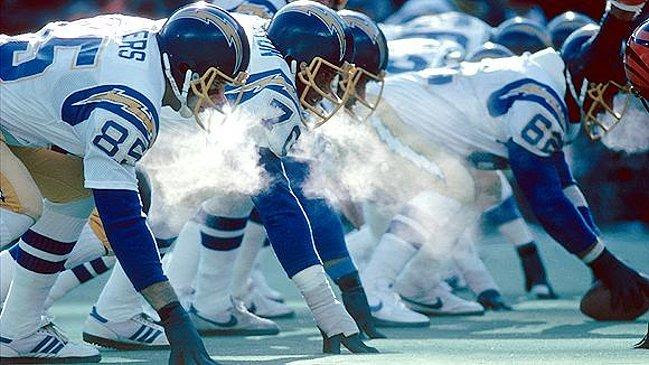 Not surprisingly, San Diego lost that AFC title game. The Chargers' only Super Bowl appearance was a blowout loss to the 49ers in SB XXIX after the 1994 season. 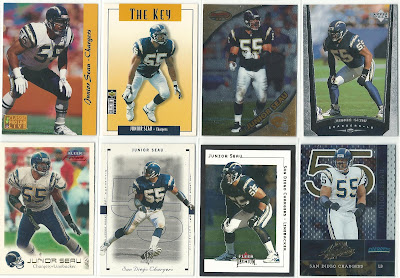 Hall of Fame linebacker Junior Seau was the star of that San Diego squad. I have nine Seau cards in my stars/HOFers box, including a '94 Stadium Club card with an interesting cartoon on the back:

Seau took his own life in 2012, less than three years after his last NFL game. A staggering total of eight players from the 1994 Chargers team have passed away; Seau was the eighth.


In 2001, the Chargers had the #1 overall draft pick. They traded the pick to Atlanta and ended up with #5 overall pick LaDanian Tomlinson.

I was a fan of the "other" LT for years, and I had hoped he would get to play in a Super Bowl. I also hoped to acquire a higher-value Tomlinson Rookie card like Topps Chrome. Neither of those happened. 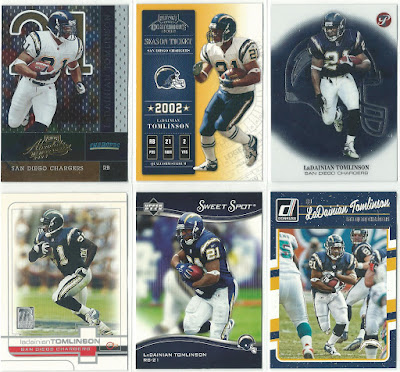 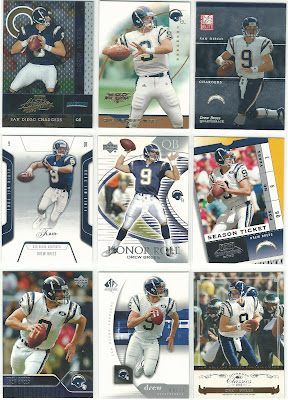 After trading the Michael Vick pick, San Diego drafted Drew Brees with their own second rounder in 2001. I have nine cards of #9, all base cards. I had a Brees SPx RC about 15 years ago and planned to send it off to PSA for some reason. But when I took it out of the top loader a small speck of paint peeled off the back. I ended up selling it instead. There were two versions of each RC. This is the one I had. Don't tell me what it's 'worth' now :/


A few months ago I stopped into a small sports memorabilia store that I had passed by dozens of times on my way to work. Autographed jerseys, prints, and helmets are way out of my price range anymore, but I had hoped there would be sports cards for sale.

As it turned out, there were very few. No packs or boxes, and nearly all of the single cards the owner had for sale were cleaned out. I did find a couple cards I liked: 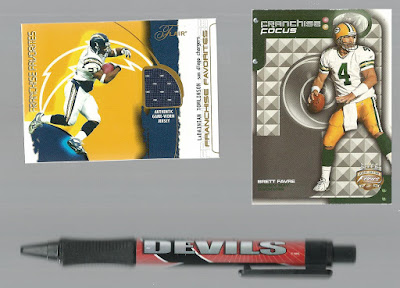 The Tomlinson Flair relic caught my eye immediately. I also needed the Brett Favre insert pictured. The proprietor of Kessler's Korner told me that some Devils players (and their wives) shop in the store-which he mentioned because my wife and I were wearing Devils jackets. As I approached the counter to pay for the two cards I decided to add the pen to my order. He charged me $5 for all three items.

The Chargers aren't the only sports team to leave San Diego for Los Angeles... The Clippers played six seasons in San Diego. The city also had an ABA team called the Sails.