The Collector's Sports Card Tour is making a Sunday night stop at the Alamo. Today we're in San Antonio, home of the Spurs. 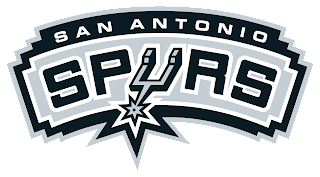 The Spurs have won five championships; their most recent title in 2013-14 avenged their loss to Miami a year earlier. Dating back to their ABA origins, the Spurs have made the playoffs in an incredible 46 of their 51 seasons. The last time they failed to qualify was in 1996-97, when Gregg Popovich took over as head coach. After that season, the Spurs used the #1 overall pick to select Tim Duncan (perfect basketball name, btw) 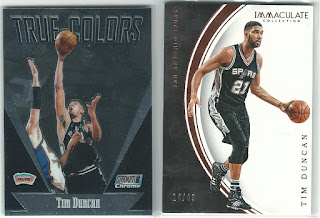 I have seven Tim Duncan cards, including these two I purchased on COMC. The True Colors insert was $0.46; the Immaculate bronze parallel (#d/49) was over $5 for a while but I finally grabbed it on sale for $3.25. I probably had a Duncan Upper Deck RC back in the day. 1997-98 was the last year I bought basketball boxes and collected the flagship set. 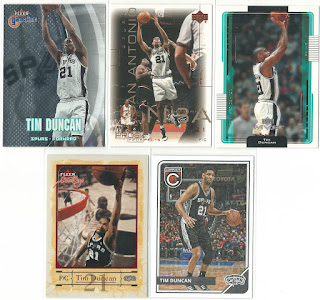 Duncan was an integral part of all five Spurs championships, but he might have cost himself a sixth ring. In the 2013 NBA Finals, Duncan missed a short jumper from about three feet that would have put the game out of reach. Instead the Heat rebounded to win the game - and the series. I remember watching Duncan slap the floor in anger after the miss and thinking how did you miss that? right along with him. 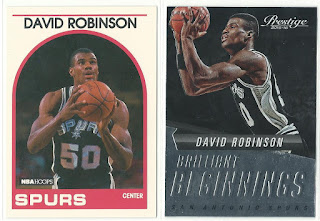 Duncan and 1987 #1 overall pick David Robinson led the Spurs to their first title in the lockout-shortened 1998-99 season. "The Admiral" spent two years in the Navy before turning pro. He was one of three centers on the U.S. Olympic Dream Team in 1992, back when big men dominated the game. 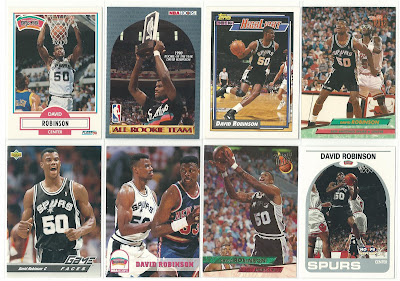 Robinson won the scoring title over Shaquille O'Neal in 1993-94, thanks to a 71-point game on the last day of the season. 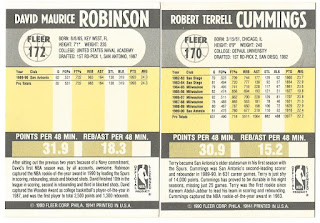 The stats on the back of these 1990-91 Fleer cards used to trick my ten year-old self. If Robinson or Terry Cummings average 30+ points per 48 minutes, why don't they play all 48 minutes? Because they're not robots..they're human and they get tired. Duh.

I have more Spurs cards in my Stars/Hall of Famers box than most NBA teams, including late-career cards of Moses Malone and Maurice Cheeks. No George Gervin cards though. 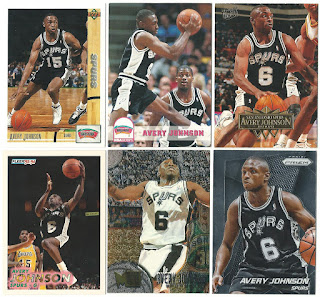 As you know by now, most of my basketball base commons come from 1990s sets. The Fleer Avery Johnson isn't quite as pink in person; it's more of a salmon color. 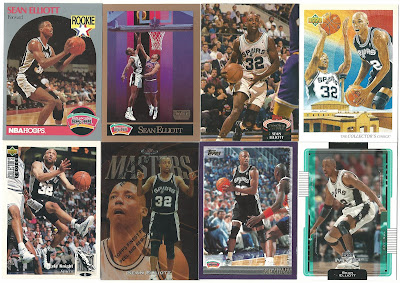 I pulled and scanned these Sean Elliott cards before realizing that one of them isn't Sean Elliott. The player wearing #32 on the Collector's Choice card is Negele Knight. I was too lazy to redo it, and I don't like leaving white space in a scan anyhow...so you get a Negele Knight card. 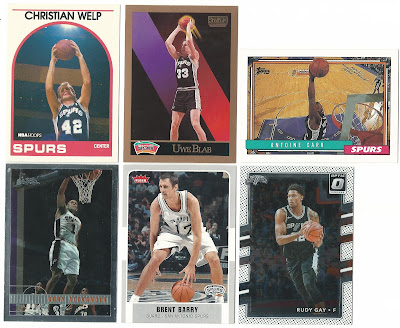 Welp..that's about it for my binder cards. You don't want to hear me blab about these guys, do you? Lol..I couldn't resist the bad puns. Uwe Blab was a funny name as a kid, probably because I pronounced it you instead of oo-vay (I corrected this later in the '90s when Uwe Krupp played for the NHL's Colorado Avalanche.) Am I dreaming, or did Brent Barry win a Slam Dunk contest one year? The Rudy Gay was in a four-card pack of Optic I bought at Target - I pulled three average joes and a Luke Kennard insert :/ 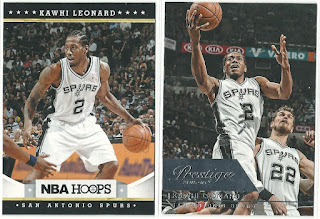 The Spurs' dynasty gave way to Golden State a few years ago, and their playoff streak is in serious jeopardy. Kawhi Leonard is unhappy and wants out of San Antonio (he'll probably end up on the Lakers with LeBron James soon.) 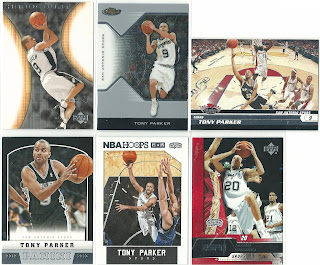 Tony Parker has already left the Spurs this summer, signing a two-year contract with the Charlotte Hornets. LaMarcus Aldridge and Pau Gasol are over 30 and Manu Ginobili is over 40. It might be time for the Spurs to commit to a full rebuild. 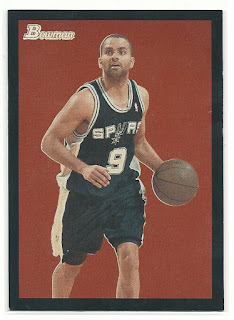 This black-bored Bowman Parker is my best Spurs card. I bought it on COMC for $5.25 three years ago. The card is numbered to 48, because it mimics the 1948 Bowman design. Blue parallels (like my Kevin Durant card) were numbered to 1948. It appears that '48 Bowman is the first mainstream basketball card set; if there were basketball cards before then I hope one of you will let me know ::coughbillycough:: 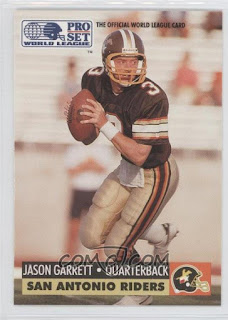 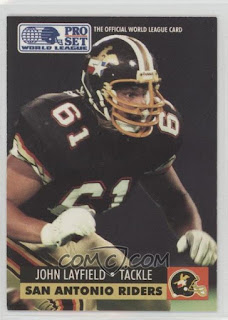 One more mention of the short-lived World League. I know I had this Jason Garrett card in my collection 27 years ago. No idea if I had the John Layfield - and until researching this post I had no idea why this was such a sought-after card. Apparently he's a pro wrestler.. or was a pro wrestler. That seems to be a fairly common career path for failed football players. I mentioned Bill Goldberg before, but there's also Rock "The Dwayne" Johnson* and Brock Lesnar, among others.


*I know his real name, I was quoting John Oliver 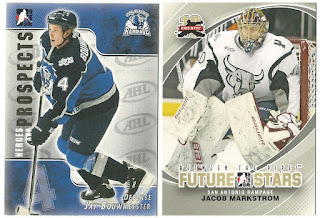 Finally here's a pair of cards that are in my collection. The San Antonio Rampage are the AHL affiliate of the St. Louis Blues, but they were the Florida Panthers' top farm club when these cards were released. The Jacob Markstrom card was sent to me by Douglas (Dollar Store Cards) along with the CFL cards I've mentioned before. (Still have a couple of those left to show you.)

Heroes & Prospects was one of a scant few hockey sets released during the 2004-05 NHL lockout. I hoarded H&P cards like the Bouwmeester, as well as another In The Game set (Franchises) to get my hockey card fix during that miserable year.


Just a quick update: the Sports Card Tour Standings page has been updated - and there's some big news regarding the giveaway draft and scoring system. Also, the contest is officially closed to new entries. Bandwagon's full, please catch another...