Continuing with my card show haul...

One of my goals was to cross off as many 2018 Topps baseball needs as possible. In fact it was the only checklist I brought with me. I'm old school. I maintain and print my own list, because it takes up less space than a TCDB page.. and because I don't have a smart phone.

I did find a seller with these singles, but he wasn't the dime box guy..so I'll cover my purchases from him in the next post. Since I wasn't expecting to find any other set needs - especially in a dime box - I had to grab and guess. 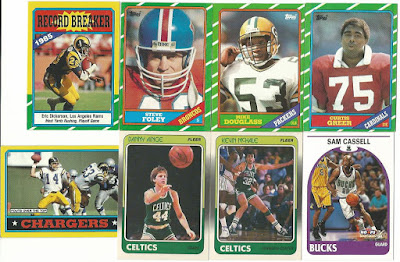 My eyes lit up when I saw the green and white borders of 1986 Topps Football. Some of the cards tricked me - 2013 Topps Archives cards were sprinkled in, and a handful of the '86 singles were the same Eric Dickerson card pictured above. Still, five singles was five more than I expected to find. I ended up needing the top three; Greer and the Chargers card were dupes.

I found three cards from the 1988-89 Fleer basketball set. All of them were Celtics (not a surprise considering I was in New England) The Dennis Johnson card was in bad shape so I didn't buy it. The only Hoops Decade card I found was Sam Cassell. I haven't officially started that set yet, and I haven't officially become a Bucks collector, but I'm on the verge of committing to both. 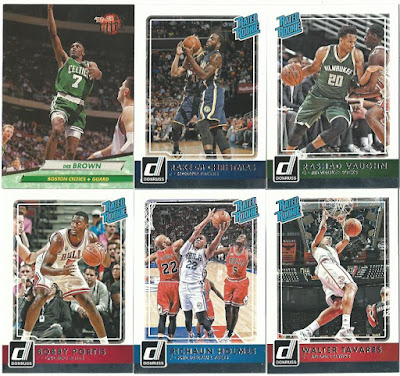 The dime boxes were loaded with Donruss. I have the complete 2015-16 basketball base set so I went right for the rookies. Of the five pictured I guessed right on two: Vaughn and Holmes. I'm now at 90.4% of the set.

I found so many 2016 Donruss football that I actually contemplated building the set on the spot. (Already had about 40% thanks to cheap retail boxes.) Instead I saved time and money by putting nearly all of them back - a smart move since I only needed Largent and Driskell.

Had I spent more time in the basketball boxes I probably could have found more '92-93 Fleer Ultra needs. I guessed right on Dee Brown and Robert Horry (who has more rings than MJ, btw) which gets me to nearly a third of the set. 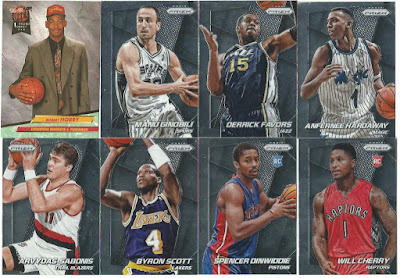 My dime box stack was packed with Prizm. I'm building thie 2014-15 set almost exclusively from extra singles Jon sent me (and there's more on the way) so I only picked out a handful. Even though I already had 105 of the 300 cards in the set, I guessed right on all seven of these. 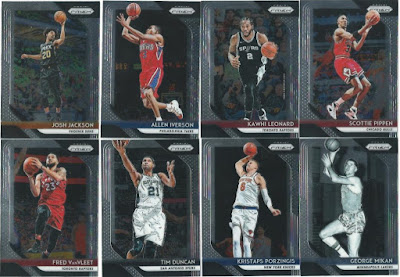 Some of this year's edition, including my first Kristaps Porzingis card. 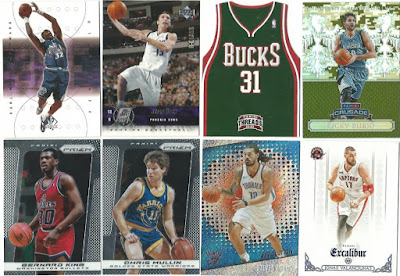 More Prizm, and another die-cut jersey (John Henson.) I couldn't pass up the Ricky Rubio Crusade card; it's too shiny to sit in a dime box. 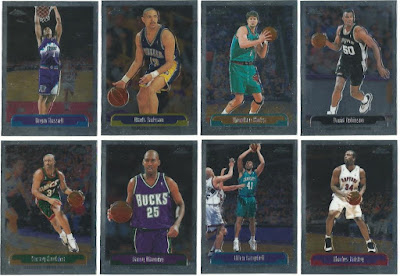 There was a nice brick of 1999-00 Topps Chrome singles in the box. Some were stuck together but they all looked crisp and clean. I found David Robinson stuck behind another card. 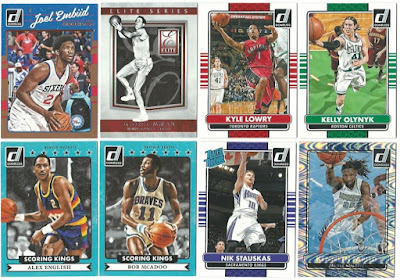 More basketball cards, including my first Buffalo Braves card. I picked up Raptors and retired players in case Douglas or Jon would like to claim a few. Tried looking for Michigan alums but almost completely blanked on who went there..though I managed to remember Sauce Castillo. 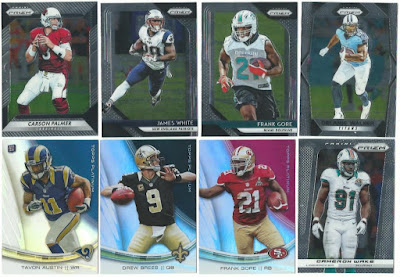 I didn't find quite as many Prizm football singles; the bulk of his football cards were from Donruss and Playoff Contenders sets. 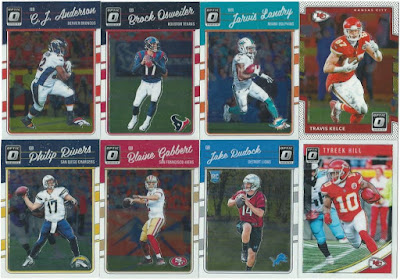 Not a lot of star power in Optic, aside from Rivers and Kelce. I didn't mind, considering Optic packs are $3-4 for four cards and this is probably what I'd pull if I bought one(or two.) Thanks for saving me $7.40, Dime Box Guy. 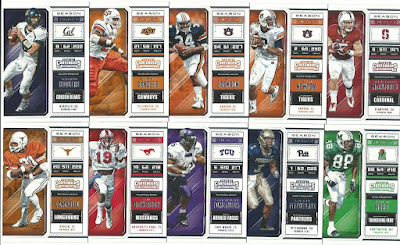 The player selection got better with Contenders Collegiate Cards. 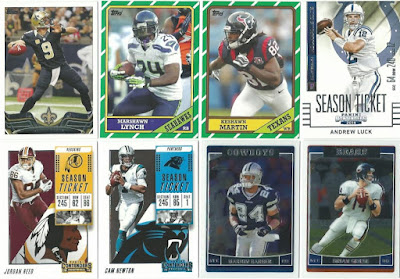 As you can see, I bought a mix of stars and not-stars, most of which came from sets I like. The exception here is Jordan Reed; I overheard my coworker tell the guys in our office that she dated him in high school. 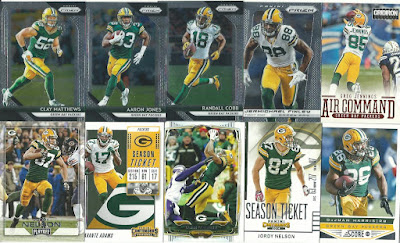 Plenty of Packers were plucked from the boxes. These were all new to me. 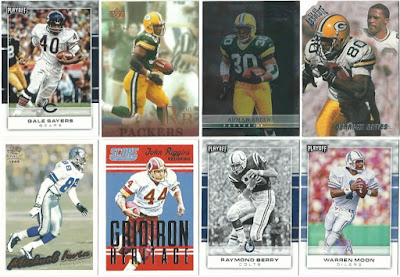 I was less certain about the older cards pictured here, but I guessed right on them, too. The only dupe I ended up with was a 2016 Donruss Jordy Nelson. 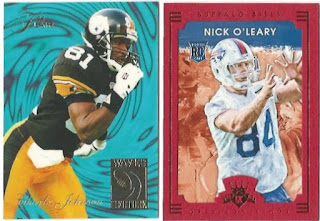 Wrapping up the football haul here. The Johnson is trade bait for any Steelers fan or collector of '90s inserts hint hint. O'Leary is headed to Douglas of the Dollar Store. 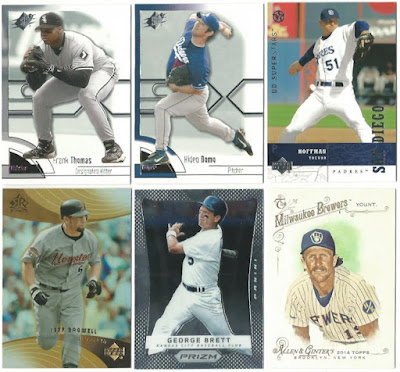 There wasn't a whole lot of baseball or hockey in this 190-card stack, for two reasons. A lot of the newer cards in the boxes were from base Topps/Upper Deck sets I already had (plus a lot of overproduction-era stuff I didn't want to waste my time on.) 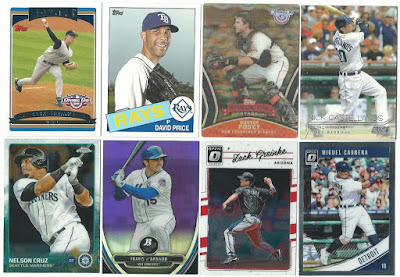 The second reason I bought less baseball is because I haven't cataloged my cards yet, so I'm not as certain of what cards I have in my collection. (The OD Posey was one of my favorite finds.) 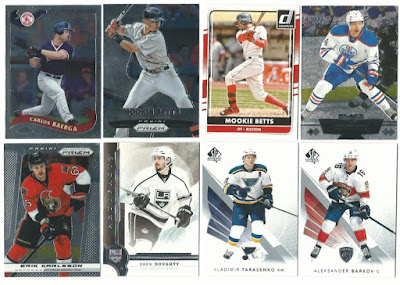 In fact I only bought three Red Sox - and I bought both Mookie Betts cards knowing I already had them. Why? Because some guy asked the dealer if he had any Aaron Judge or Mike Trout cards. Nah, they wouldn't be in here said the seller. #BettsIsBetter

When I started shuffling through the rows of hockey cards the dealer commented to me that he was glad he brought them, since he doesn't usually sell much hockey. His selection was equal to the other sports, it just wasn't stuff I needed. 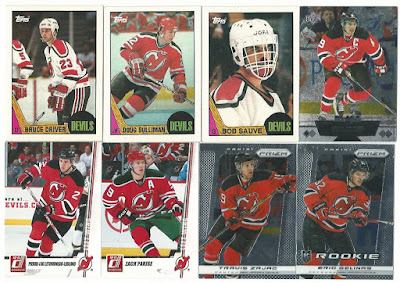 I'm not even sure I needed these Devils, but I didn't want to pass 'em up. Kinda wish I'd taken a close look at his hockey cards, but my wife was waiting for me in the car and after 40 minutes I hadn't left the first table yet.

That's when I decided to stop at 190 cards, pay my $13, and work my way around to the Packers fan at the other side of the room...