A few days ago I was reading a post from Night Owl in which he mentioned Lonnie Smith.

I knew a little bit about Lonnie as a player, but N.O. made reference to some of Smith's bizarre behavior, which I did not know about. He provided a link to a YouTube video.

Do any of you guys click on links and videos when they're included in a post? I use them often but I get very little - if any - feedback on them. I'm going to use both in this post.


I clicked on the link to the Lonnie Smith video, which led me to the wonderful world of Jon Bois. 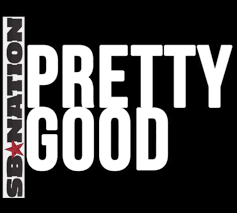 For the past four days I've been binge-watching SB Nation content - particularly anything with the words "Pretty Good", "Chart Party" or "Jon Bois". Some of these videos are more than five years old. I'm ashamed I missed them at the time. Well, I didn't miss all of them.

A few months ago I did see a Dorktown video about the 2010 San Diego Chargers.

The charts, stats, and attention to detail were impressive. The presentation of important facts - set to dramatic, often chilling music - was unique. And yet I don't recall clicking on any other SB Nation content. Perhaps Jon Bois videos are better when he rides solo; there's less of a "two guys talking sports" vibe and more of a dramatic storytelling feel to them.

I've been a sports fan for most of my 39 and 5/6ths years on this planet. I can't even begin to estimate the amount of time I've spent absorbing sports facts, stories, and statistics. And yet, Jon and the SB Nation crew told me a dozen stories I did not know or notice.

After watching a few of the videos that interested me I was left with stories about an impossibly high-scoring college basketball game (which was scored incorrectly until Jon corrected it), a lawn-chair balloonist named Larry Walters, and a Poker story? I gobbled up the first two. Tonight I'm watching the Poker one and the conclusion of The Bob Emergency.

Oh, and Jon Bois has some sports card content, too. Holy sh*t this guy is my hero.

Thanks, Night Owl. Sincerely, thank you. You opened the door to a wormhole that has taken my mind off the terrible things that have happened in our country lately. Also, thank you for the cards. 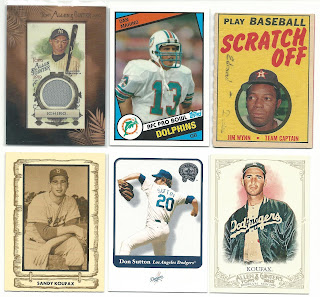 I had claimed the Ichiro relic in Greg's giveaway, and he was kind enough to send some extras - including a Dan Marino rookie reprint, and some Dodgers legends. I have a bit of a Sandy Koufax PC (perhaps an on-card auto will make my Dream card shopping list?) Don Sutton was a need for my All-Time Team collection. 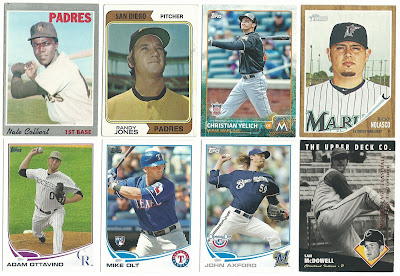 And so were these. I'm sure N.O. was happy to offload a couple cards of NL West rivals and Marlins.  The '70s Padres in particular were a nice surprise.

Wait a sec, you may be thinking, Mike Olt didn't make the Rangers All-Time team.. did he?

Nah, he's from Connecticut. This one will go in my hometown binder - although I'm increasingly tempted to build the 2013 Topps set considering I've accumulated 23.5% of it without really trying. 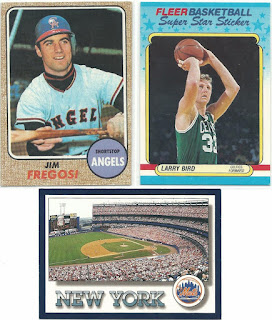 I've received a few other card packages this week - some trades, a purchase, and a couple handfuls of All-Time Teams candidates. I'll have plenty of topics to discuss in the coming days.

But there's no way I can make them sound as interesting as this:

Thanks for reading (and watching?)