The rising prices of certain baseball and basketball cards has been on my mind a lot lately. 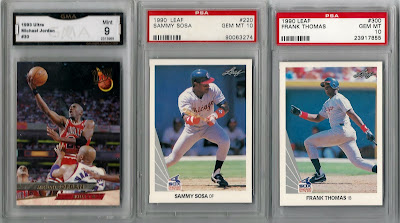 There is a stack of 35 graded cards sitting on my desk. One of them (not pictured) is selling for over $1,000. The entire stack could fetch over $3,000 if I sell them all. Right now I'm debating which ones to sell - and what to buy if I do sell them. My 1956 Topps set build isn't even 50% complete - and I still need eleven Hall of Famers.

It would be fun to acquire a Dream Card this summer, and the values of some of these cards on my desk will never be higher - meaning some singles on my "bucket list" that seemed out of reach might finally be attainable. 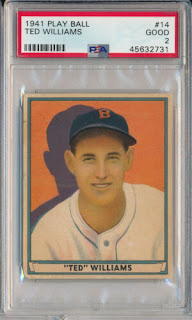 I've shipped out all of my trade packages and care packages in order to clear the runway for my 100,000th card. Those of you who have over 100,000 sports cards or don't pay attention to such milestones might be wondering why this is so important to me. To be honest, it's been such a difficult year that I kind of just feel like celebrating something and since I'm close enough to acquiring said card I decided to make it special.

After the three major "waves" of cards that arrived earlier this month I decided to send out some small trade offers on TCDB before closing up shop for the summer. Most of them were accepted but I'm still waiting on a reply from one user. Three users rejected my offers - one was for personal reasons while another declined my trade offer because he only does small PWE trades and I was asking for (checks notes)... nine cards.

As of Friday morning my card count stood at 98,824. This does not count the 121 cards held up at COMC for who knows how long - though I have added each one to my In-Transit list. However it does count all 660 cards in the 2011 Topps Diamond Anniversary Factory Set - which should be counted as one factory set but there doesn't appear to be an option to do so. I'm planning a hand-count of my entire collection sometime in June, along with some major eBay transactions, so that I have an exact number before I approach 100k.

However there's no doubt that 99k is close at hand. And Friday's mailday helped me inch ever closer to that number: 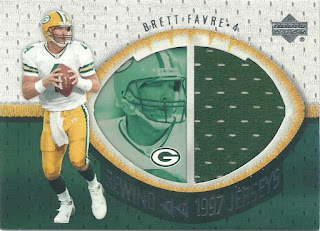 This Brett Favre Rewind to 1997 jersey had been sitting at the top of my COMC watch list for a while. I decided to trim down a lot of that list and bought this one on eBay instead. It was cheaper, it arrived in hand much faster, and 10% of the profit went to Wounded Warrior Project. This is my 813th Favre card. Not particularly close to 1,000 - but not too far off, either. 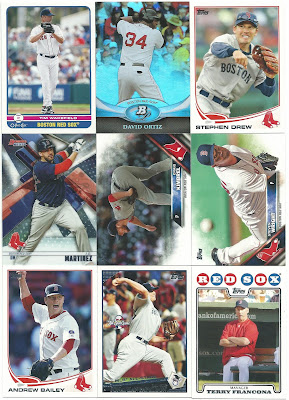 Red Sox cards acquired in various trades. The David Ortiz has some corner wear on the back. 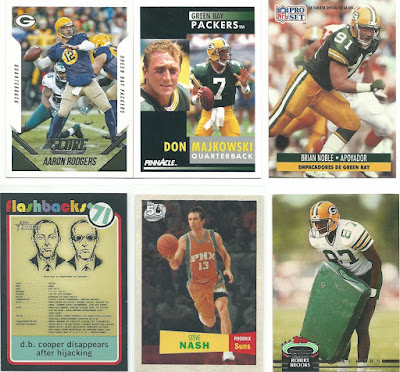 Some Packers I didn't have including a Brian Noble Pro Set en Espanol and a Robert Brooks Stadium Club high# RC. I found this surprisingly easy to acquire given the price of a (non-RC) Brett Favre from this set. Some cool vintage-design cards fill out the scan. The D.B. Cooper card was a must-have as soon as I saw it; that's one of my favorite modern news stories. 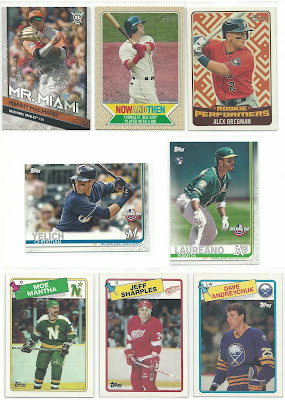 Set fillers. I've finished 2018 Topps Big League and I've got about 2/3 of the Players Weekend variations so I'm adding them to the binder. Still chipping away at the 2017 Topps Heritage "master" set - in quotes because I'm definitely not chasing all of the inserts. I traded for nine singles from 1988-89 Topps and tossed the other six in my growing TCDB Trade Trash pile. Another reason why I've turned off trading there - you'd be amazed at how many damaged modern cards traders will send out.


I have no idea what to do with the discard pile. If anyone wants about 15-20 well-loved singles, no questions asked, I'll be happy to send a PWE to the first two readers who ask for them. Otherwise I might just throw them out because I would not send these in trades. 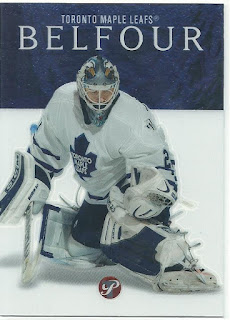 Thanks to CrazieJoe for helping me complete the 2003-04 Topps Pristine base set! There were some extra cards included, which increased my card count to 98,870 cards. At some point I might scan up all the Prisitne singles to celebrate the completion of this 16-year project. I wouldn't expect anyone to be interested in a scan-heavy post of a hundred hockey cards .. but I'm always surprised at which types of posts get comments (or don't.)

Obviously Free Card Friday posts will bring in traffic, but I'm surprised that Frankenset Sunday posts are popular as well. My last post, on the other hand..


The Athlete/Entertainer comparison game had just four players, but the combined guesses of Shane, Brian, Fuji, and Josh correctly identified five of the six subjects:


I'm not sure if I'll publish a Frankenset Sunday post tomorrow, but my next team was going to be the Chicago Cubs. (bet'cha that will get a bunch'a comments!) I'm tempted to super-size that post with some thoughts on Sammy Sosa and the Cubs items in my collection in advance of Long Gone Summer so perhaps I'll sub in a last-minute replacement team...