The Third Wave arrived last Friday. Fuji and Tom posted their dime-store finds from Baseballcardstore.ca, and I've been looking forward to showing off my spoils. My entire order cost just $16.09 including shipping. Here are the highlights: 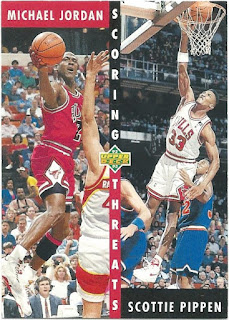 As you know I am not a Michael Jordan fanboy and I didn't watch a second of The Last Dance. That said, this card was featured on the website's front page so I added it to my cart quickly before someone else snatched it up. 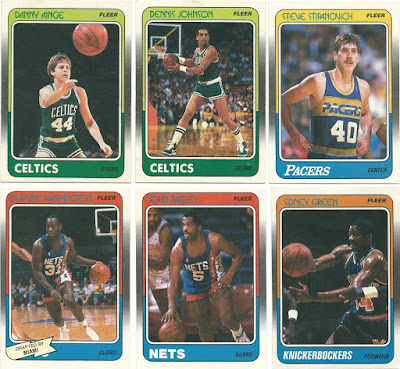 I placed my order near the end of April and probably missed out on a lot of set needs as a result. There were still a few 1988-89 Fleer singles available so I grabbed all the cards I needed - and a couple that I didn't (like the two Celtics.) These cards and a couple recent trades bring my set build to over 35%, though I doubt I'll ever finish it thanks to that damn MJ. 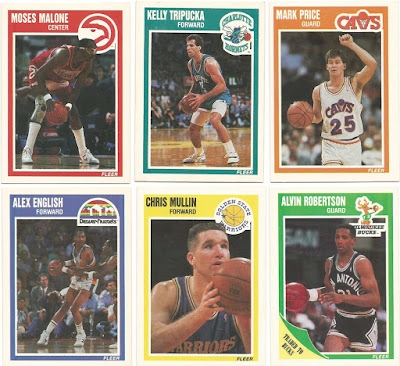 1989-90 Fleer seems like a much more reasonable goal. The singles are easier to acquire in trades and have far fewer centering issues. I'm already approaching 25% of this set. 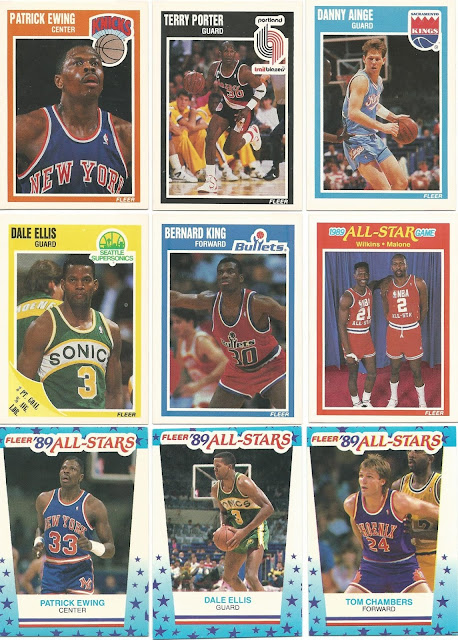 Plenty of starts for ten cents apiece. Dale Ellis was a beast back in the day. The base set single is clean but the sticker is diamond cut :/ 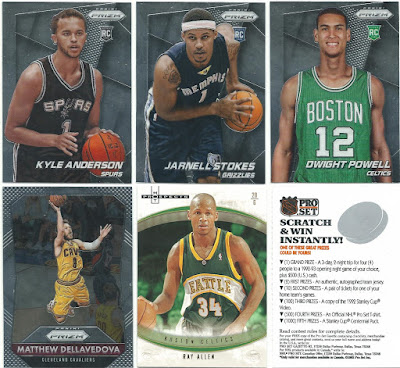 I was thrilled to find Anderson, Stokes, and Powell for ten cents each. That leaves me just ten cards short of the 2014-15 Panini Prizm set. Unfortunately there are some big names left.

Football finds, including the only Brett Favre card for sale on the site that I didn't have. That makes 812 unique singles of #4. 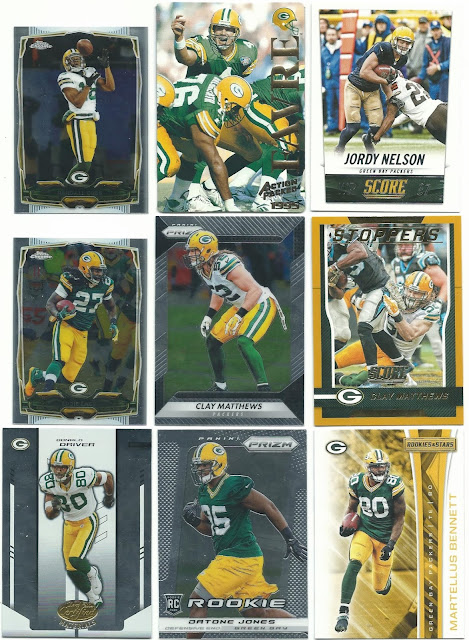 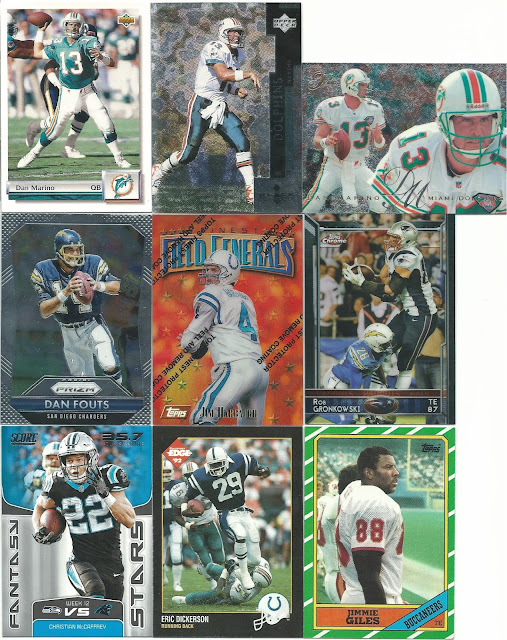 After searching by team and set I decided to hit some player PCs. My Dan Marino collection had been dormant for a while, and I was happy to find this trio, especially the 1992 Upper Deck gold single. The Jimmie Giles is an upgrade (I'm nearly done upgrading the '86 set), The Fantasy Stars insert was the only McCaffrey card on the site. Harbaugh is a refractor; it will probably end up with Dennis at some point but I'd be happy to hold onto it.

On to hockey. I have a bunch of 2016-17 O-Pee-Chee Platinum refractors (or "rainbow" as they're called) as the ePack-COMC connection lowers the price to 27 cents or so. Jonathan Toews is the 18th such single in my collection; if I'd found more for ten cents each I'd go for the whole 200-card set! 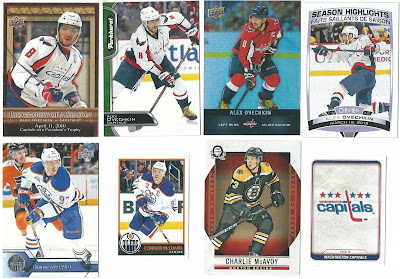 I can't recall ever seeing Alex Ovechkin or Connor McDavid in an actual dime box, so my eyes lit up when I saw these on the site. The Capitals retro sticker was the only one available. I've been watching a Whalers logo sticker on COMC but it won't budge below $2.60 - or about $2 more than I'm willing to pay. 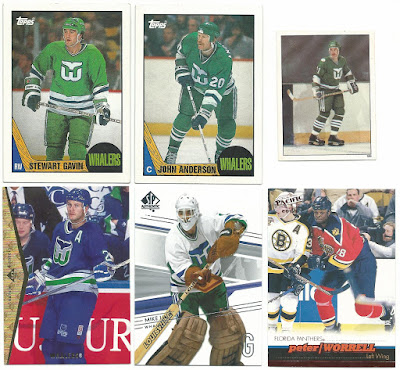 I found a few needs, including a Blaine Stoughton sticker. The Peter Worrell Pacific red parallel is a dupe (trip, actually) but I can't pass up that dime deal. 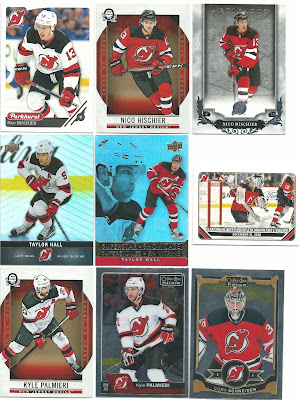 I found lots of great Devils cards on the site (whaddya mean the Devils aren't popular in Canda?) The Taylor Hall at the center-left has been sitting in my COMC inventory since November. Guess I can sell that one. Also, despite the refractors rainbows selling at 27-30 cents on COMC the base Chrome Platinum singles are never that cheap, so I was happy to get these two for a dime apiece. 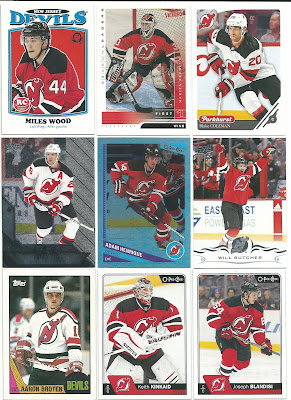 Same for the O-Pee-Chee base cards and the (non-bronze) Parkhurst card. Martin Brodeur cards were tough to find on the site, but here's one I didn't have. I'm up to 490 unique cards of the GOAT. 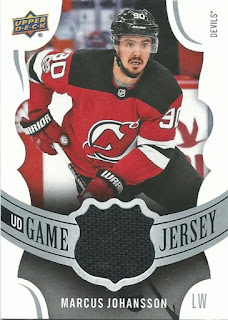 MoJo! This Marcus Johansson relic was one of two jersey cards I saw on the site. I can't remember the other one, but I was amazed that one would be a Jersey card. Ten cents is the least I have ever paid for a memorabilia card.

I did a quick search for Dustin Pedroia and David Ortiz but didn't worry too much about picking up Red Sox singles on BBCs.ca since I can get them in trades and on Cardbarrel. 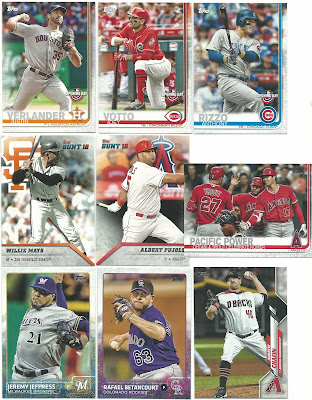 Most of my baseball card purchases were part of set builds - conventional and Franken. 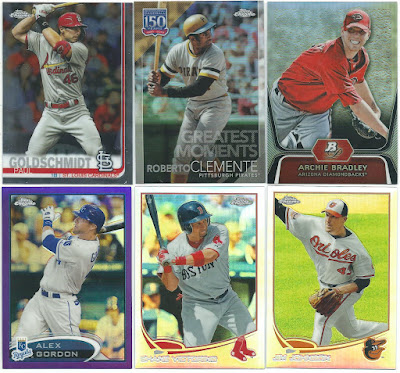 Found a few refractors for a dime each, including a purple Alex Gordon. The Clemente Greatest Moments was at the top of the webpage along with the Jordan/Pippen. It's a very nice upgrade for my very sparse Pirates page. 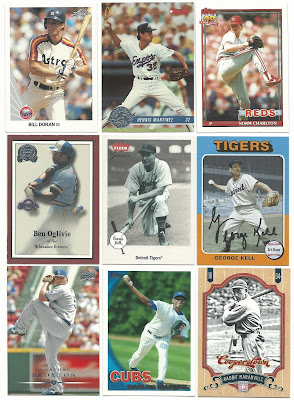 Some relievers, a couple of George Kell cards, and a Rabbit. The McDonald's Canada cards are neat. Jeff at Wax Pack Wonders sent me a better Ben Oglivie shortly after this order arrived. 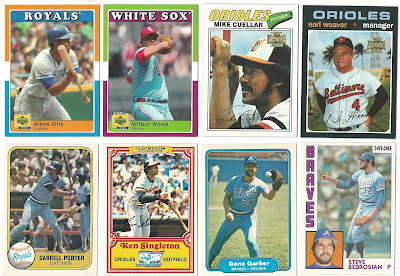 When I searched the site for All-Time team needs I started alphabetically and didn't get too far down the list, which explains why I have two Atlanta Braves and three Baltimore Orioles here. You'll see more Royals cards in my next post.

This concludes the three major sports card shipments of May. I'll probably spend Memorial Day weekend sorting all of the new additions and making the rounds on my blogroll. The family and I usually have a barbecue/birthday party for my brother-in-law but I'm not sure if we'll attend this time. I've been feeling mentally and physically fatigued lately, as I'm sure many of you have.

If you haven't done any dime box searching at Baseballcardstore.ca I highly recommend it. And if you have shopped there, let's see what you got!