Pack Stash In a Can

Before I started blogging the term "pack stash" was foreign to me. I'd kind of seen it in action as my brother-in-law would often buy a box of hockey cards, open four packs, and then do something else for a while. Sometimes he would take an entire week to open all the packs in the box. I couldn't imagine having unopened packs in my house longer than a few hours.

Funny thing is, I actually had a pack stash when I was much younger. Ever since I started going to card shops I wanted to recreate the layout in my own card room. In 1988, when Topps baseball cards were everywhere and magazines advertised bulk lots of star players, I displayed my star cards in piles on a brown bookshelf (which is still at my mom's house). Then I would place labels on the shelf in front of the stack: Bo Jackson 50c, Roger Clemens 35c, Jose Canseco $1, and so on.

Some time in 1993 or early 1994 I got the idea to recreate that - and I now had some wax boxes to display in my "store." I held back as many packs of 1993 Flair baseball and 1993-94 Score hockey as I could, until reality set in. There were no customers coming to my attic room just to purchase packs from one of two half-empty boxes I had for "sale." And so after a few weeks (months?) I cracked them open, finally revealing a Pierre Turgeon Franchise insert and a Mike Piazza Wave of the Future insert.

Fast forward to 2020. We're all quarantined with limited access to new sports cards. Those of us who venture into the sports card aisle at Target or Wal-Mart have been shamed for purchasing "non-essential" items. COMC and Burbank Sportscards are closed, as are hundreds of other hobby shops across the country.

A pack stash would really come in handy at a time like this. But I haven't been disciplined enough to keep cards unopened in over 25 years.

While rummaging through my closet for summer clothes (and things to sell on eBay) I uncovered this: 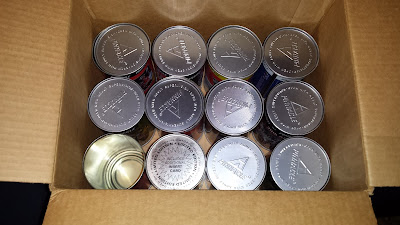 Most of them were opened years ago. The Marino and Nomar cans came from Dennis, while the hockey cans belong to my wife. 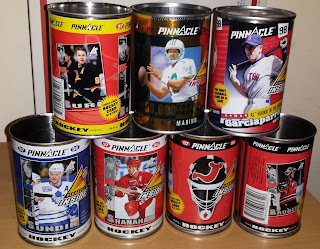 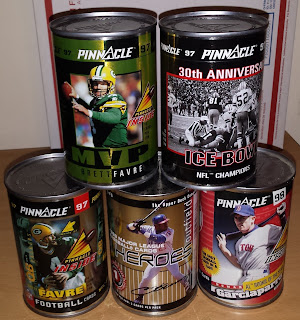 ...which means I technically have a pack stash.

I was never really tempted to open these because the sealed cans were more interesting to me than the cards. The players and teams depicted on the outside of these cans fit my PC at the time, and opening them would be akin to cracking open a Starting Lineup or McFarlane figure.

That said, I've considered opening those figures for reasons I won't get into here. Perhaps it's time to consider taking a can opener to my "packs" and add a few cards to my collection. 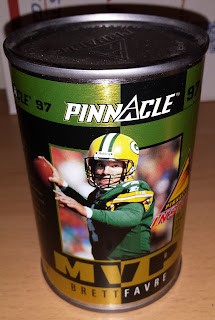 I did a quick eBay search and found that a sealed Brett Favre can such as this sold for over $20 on eBay. I won't add a link to the listing since no one clicks on those anyway :p 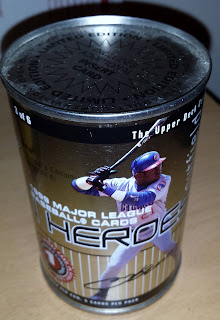 Sammy Sosa items are suddenly red-hot again thanks to the upcoming ESPN doc Long Gone Summer. This Limited Edition can includes an additional insert. That's got to boost the value a bit, no? I couldn't find any of these cans listed on eBay so there's only one way to find out.

What would you do with these five sealed cans - Sell 'em, open 'em, or keep 'em as is?

Email ThisBlogThis!Share to TwitterShare to FacebookShare to Pinterest
Labels: 1997-98 Pinnacle Inside, pack stash