Two Box Break with Surprises Inside

It was not a good day for my two favorite sports teams. The Devils were eliminated in five games by the Tampa Bay Lightning, and the Red Sox were no-hit by Oakland's Sean Manaea. The Devils series (like much of the Stanley Cup Playoffs) was highly predictable, but until yesterday the Sox were an astounding 17-2 and led the league in runs scored and batting. Manaea is having a great season so far, but I don't think anyone expected that kind of performance against Boston's big bats.


I haven't mentioned the Red Sox' historic start on my blog, for a few reasons. For one, I didn't want to jinx them. Two, the playoffs always divert my attention from baseball until such time that my favorite teams/players are eliminated. And three, I've been so backlogged with blog post ideas that I'm unable to keep up with current events.

Zippy Zappy of the blog Torren' Up Cards is well-known to most of you but I just recently added him to my blogroll. He's got a great Blog Bat Around idea going, which prompts bloggers to build a baseball team from the autographed items in your collection. I'm still on the fence about participating. I'd prefer to hold back my best autos for the Sports Card Tour. Plus I'd have a hard time filling positions, especially catcher and bullpen. Unless ZZ can spare a Torrens auto for me ;-)


I do want to get some more Sports Card Tour stops out of the way this week. The longer I go without writing, the harder it is for me to get back on track. And there are so many new cards in my collection that I can't wait to get through the tour and get them all sorted.

Last week I received two boxes of cards in the mail - and four thank you posts. One of each was from Dennis (Too Many Verlanders/Manninghams) Though I did send him a four-card PWE I was certainly not expecting him to hit me back with a Medium Flat Rate box full of...magazines! 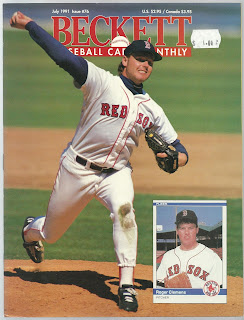 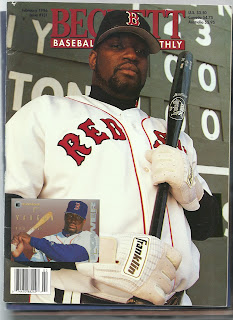 Dennis must have been doing some spring cleaning; there were 13 magazines with Red Sox on the cover, including 11 Beckett back issues. But that's not all!

I kept reaching my hand into the box and pulling out fun surprises, like these oversized Dan Marino cards: 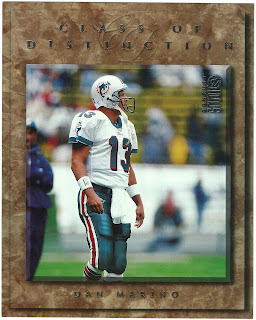 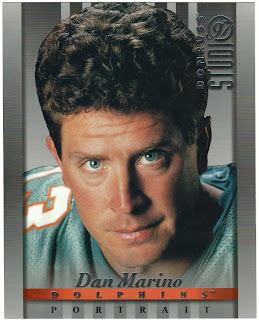 And two Pinnacle Inside cans (Marino and Nomar Garciaparra) which were carefully filled with stacks of cards..including Marino cards of various sizes: 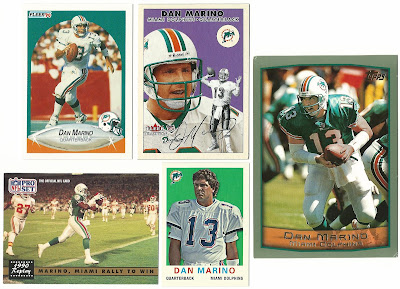 Dennis stuffed 75 cards into those cans, hitting player PCs like Martin Brodeur, Steve Nash, Shaq, and another NBA great who I will mention in my next post.

There were Nomar cards inside the Nomar can.. along with another super cool item. 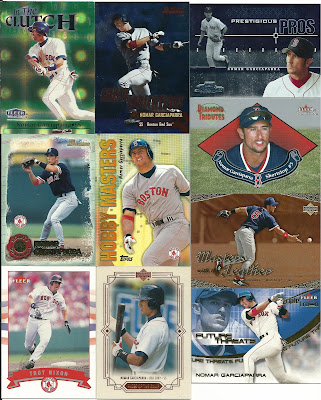 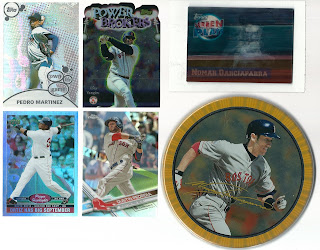 I've never seen these Topps Screen Plays before, which is a bummer since I was a film buff and aspiring screen play writer when they were released in 1997. The flip side of the tin looks more like a movie film canister. I'm assuming these were one-card tins; the Sportflics-like card above it was the only one inside.

The whole swap with Dennis originated a while back, when he offered up a duplicate of this Max Scherzer patch card. I'm a big fan of Immaculate cards, even unlicensed ones, so I claimed it. Should have known by now that Dennis would send much more than this one card. 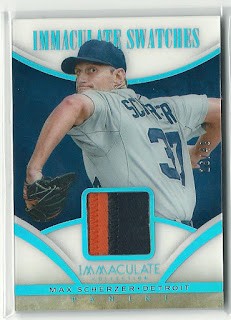 Dennis, thanks again for another great trade! I keep trying to equal your generosity, only to be as overmatched as the Devils and Red Sox were yesterday.

The Large Flat Rate box I ordered from eBay contained over 4,000 cards. Most of them were baseball and hockey, which kind of figures because I had been hoping to beef up my basketball and football card collections. I'll get to the hockey cards another day, but here's a sampling of some of the baseball in the box: 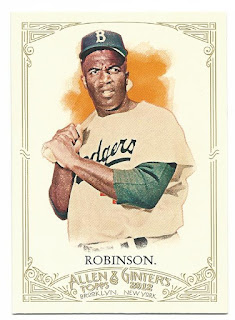 This might be my favorite card of them all.. and it arrived right after Jackie Robinson day. 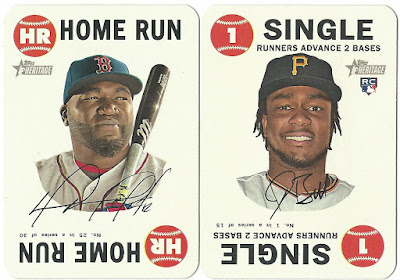 I didn't need any of the eight Heritage base cards in the box, but I needed both these inserts.

A fair amount of recent Topps sets were represented. I came up empty on the two I'm collecting (2015 and 2016) but there were some nice singles from 2012: 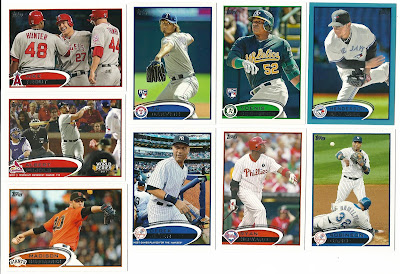 The seller promised autos and relics in the listing. He/she met the minimum requirement: 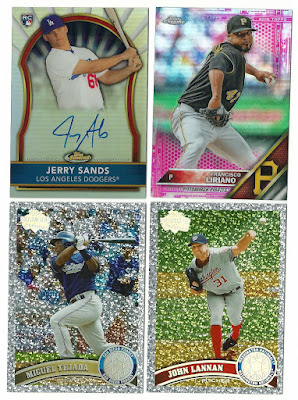 Sands would not have cracked my autographed card outfield. Not by a long shot.

I didn't buy this box for the hits anyhow. I bought it for the large chunks of junk wax: 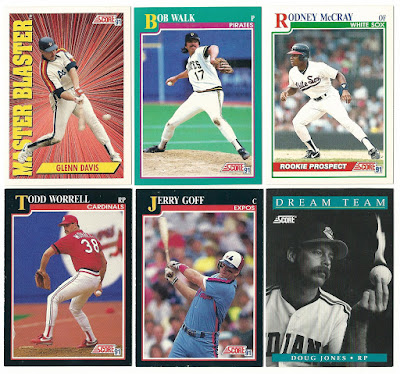 My brother-in-law gave me his sealed factory set of 1991 Score - which means all 421 cards I found in this box are dupes. However I haven't actually looked at them in years. Even without any star power (aside from the great Bob Walk) I found some cards that were interesting to me.

I tried to keep an exact breakdown of each card by set and year - which I won't bore you with. Once that was done I removed the overproduction era stuff I couldn't use and put them back in the box (the fate of those cards will be determined later.)

Then I extracted all the Red Sox and star players/HOFers: 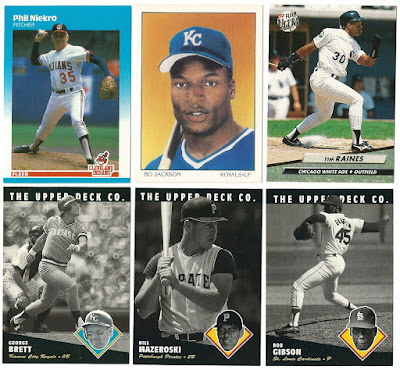 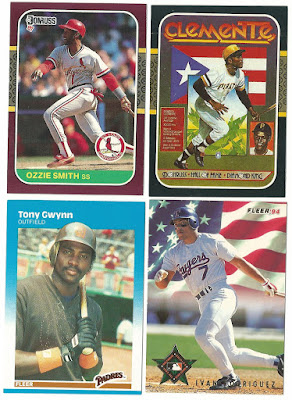 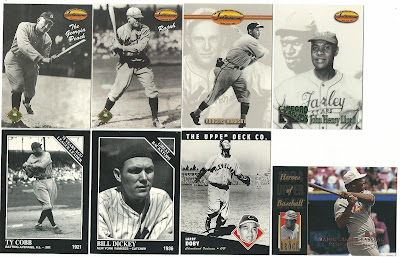 This weekend I've been sorting all of the remaining cards by team. I plan to send these out for trades, and I'd like to do another 50/50 swap this spring. But I want to change it up.

Anywho. Last year I had a lot of success swapping team lots for random stuff. Nearly everyone who claimed a team lot sent cards that fit my collection - even though I was willing to accept any 50 cards. Though I did get ripped off by a couple of readers I learned a lot about which bloggers are reliable (and generous) trade partners.

This time, I'm probably going to implement a "must send first" policy for anyone I don't recognize. If you're reading this, that almost certainly won't affect you. But it will have the added benefit of spacing out trade packages, so that I'm not mailing out a dozen at once.

I also had another idea, based on watching/reading Box Break posts. What if each 50/50 package included 25 cards from your chosen team and 25 random cards - either from a single different team (box break style) or an assortment of teams (repack style)? In either case I'd ask participants to claim a team and a number - which would be assigned to your "surprise" package.

Does this sound interesting to any of you? I'd appreciate any feedback you have on how we can make the 50/50 swap even better this time around.