The Collector's Sports Card Tour is back in the great white north. Today we're in Edmonton. 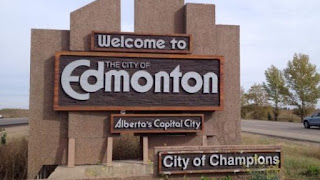 Edmonton has two pro sports teams - the Oilers and the Eskimos. The 14 Grey Cups won by the Eskimos is one reason why Edmonton calls itself the City of Champions.

I have some Eskimos cards incoming from Douglas (Sports Cards From The Dollar Store) who wanted to rep Canada's non-NHL franchises on this tour. I'm looking forward to learning more about the CFL; the only Eskimo I know is Warren Moon, who started his Hall of Fame career with the Esks. 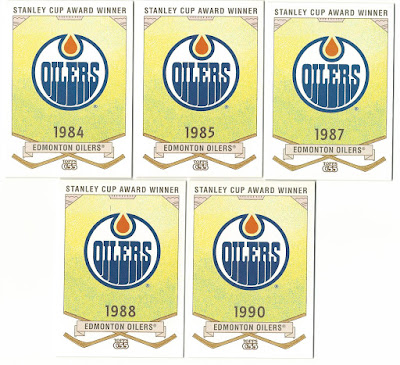 The incomparable Wayne Gretzky is the Oilers' all-time leader in nearly every offensive category, and holds NHL records for goals, points, and assists. You will not see any cards of the "Great One" in this post, for reasons that will soon become clear (no, it's not because he called the Devils a "Mickey Mouse" organization.) 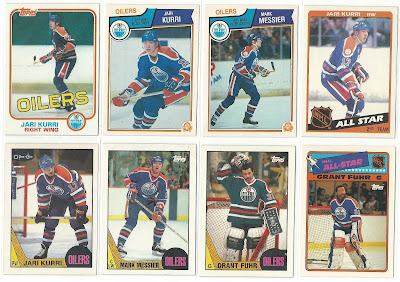 The Oilers were defending Stanley Cup champions when I first started collecting hockey cards in 1990, but by then they were already hemorrhaging Hall of Famers. 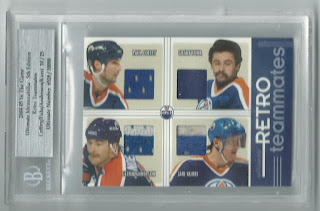 Paul Coffey was the first to leave, a year before Gretzky. By the time I bought my first pack of 1990-91 Pro Set, Jari Kurri had signed with the Devils...of Milan, Italy.

Oh, Pro Set. (Kurri played seven more seasons in the NHL after returning from Italy.) I've sold some of my Kurri cards but I still have about 30 of his Oilers issues. 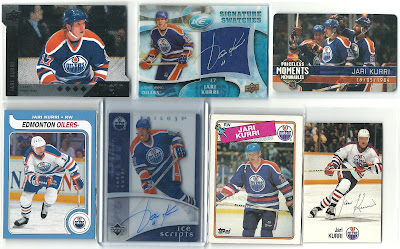 Beckett Hockey Card Monthly had the Signature Swatches auto on a list of unconfirmed cards in the back of one issue; I contacted BHCM to confirm I had this card but never heard back (I'm assuming other collectors confirmed it as well.) 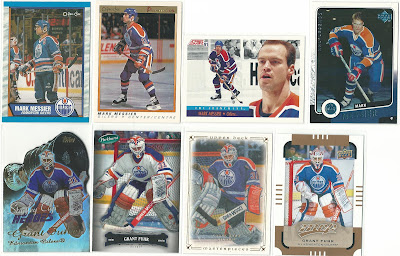 I never liked Mark Messier, but I did have a decent Grant Fuhr collection for a while.

When Upper Deck first released The Cup in 2005-06, my hockey card collecting was at its peak. And for some reason I felt compelled to partake in the experience of paying $400+ for a pack of 5-6 hockey cards. Fortunately for me, the biggest 'hit' I pulled was a PC player: 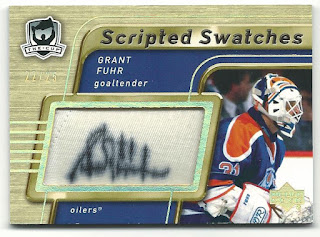 Eventually every star player left Edmonton, either for the L.A. Kings (Gretzky, Kurri, Marty McSorley), the Toronto Maple Leafs (Fuhr, Glenn Anderson), or the New York Rangers (everyone else.) The Oilers rebuilt in the 1990's with young players and high draft picks such as Doug Weight, Jason Arnott, and Todd Marchant. 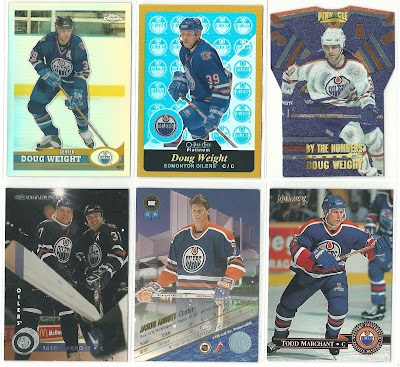 Marchant has more points than any player in NHL history... who shares my birthday.

Not all of their prospects panned out. Long before prospecting was a thing, I hoarded cards of the Oilers' top two draft picks, Jason Bonsignore (4th overall) and Ryan Smyth (6th overall.) I was so excited to find this Bonsignore Finest refractor in a box at my LCS I couldn't wait to hand over the full Beckett price ($5?) 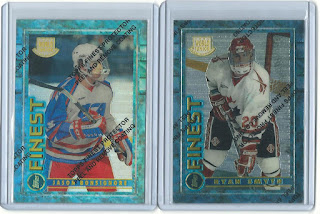 Bonsignore was a total bust. Worse than Alexandre Daigle. But that Smyth guy turned out okay. 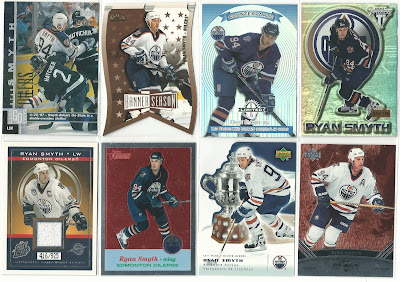 When the Whalers were on the verge of leaving my home state, the Oilers were also in serious financial trouble and very nearly moved to Houston. (Houston Oilers? How original.) In solidarity with the last remaining WHA franchise, I adopted Edmonton as my favorite western team. After the Whalers left for Carolina - and before I moved to New Jersey - the Oilers became my favorite team anywhere.


That's when my Ryan Smyth collection really took off. I currently have over 150 Ryan Smyth cards, plus a few McFarlane figures and a replica "home" white jersey.


Edmonton always seemed to be fighting for the 8th seed every season, but I enjoyed cheering for a small-market team 2,500 miles away. When the NHL lockout wiped out an entire season over a salary cap, I knew it was done with the Oilers in mind. No more sneaking into the playoffs for these guys. No more losing star players. For once, the Oilers could bring in a super star player.

And that's exactly what the Oilers did immediately after the lockout ended, trading for an MVP defenseman in Chris Pronger, and signing him to a five-year contract. 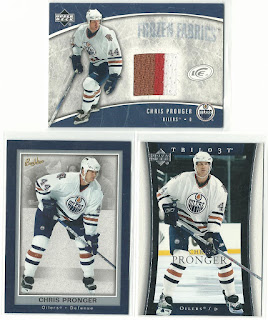 There's a card shop here in NJ that I visited a few times. It was basically a small room with a ton of boxes everywhere. You have to do a lot of digging, and the guy doesn't have any prices on his cards. I found a sick patch parallel of that Frozen Fabrics card and asked him how much he wanted for it. It was #d to 10 so he charged me $50. (I later flipped it on eBay for $112.)

Even with Pronger on board, the Oilers were still scratching and clawing their way to the the playoffs as an 8th seed. I remember Barry Melrose breaking down every first round series "this team will win if..." and then he was asked if the Oilers have any chance against the top-seeded Red Wings. "No." 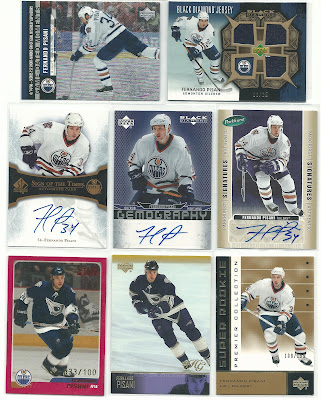 The Oilers did beat Detroit (shut up, Melrose) and kept on winning. Fernando Pisani, an unheralded third-line winger, became Mike Bossy that spring. And I became a Fernando fan. My wife started singing the Abba song of the same name every time he scored.

In the first Stanley Cup final of the salary cap era, the Oilers faced off against..the Carolina Hurricanes. The team that ditched my home state. The team I hated more than any other. The 'Canes were up 3-1 in games and had a power play in overtime.

I left the room. I could not watch those 'zombie Whalers' win the Cup.


A minute later I heard my wife shout from the other room "They scored!!!"
"Who?" I asked.

(That's right, Dodgers fans.. Fernando-mania was a thing in hockey, too.)

It wasn't enough to win the cup, however. Carolina crushed my soul and took it in seven.

Less than a week later, Chris Pronger demanded a trade out of Edmonton because reasons. So much for the salary cap helping small-market teams keep their star players.

I continued collecting Oilers cards for a few more years, especially Smyth and Pisani. At one point I nearly completed a Pisani set of SP Game Used Letter Marks. 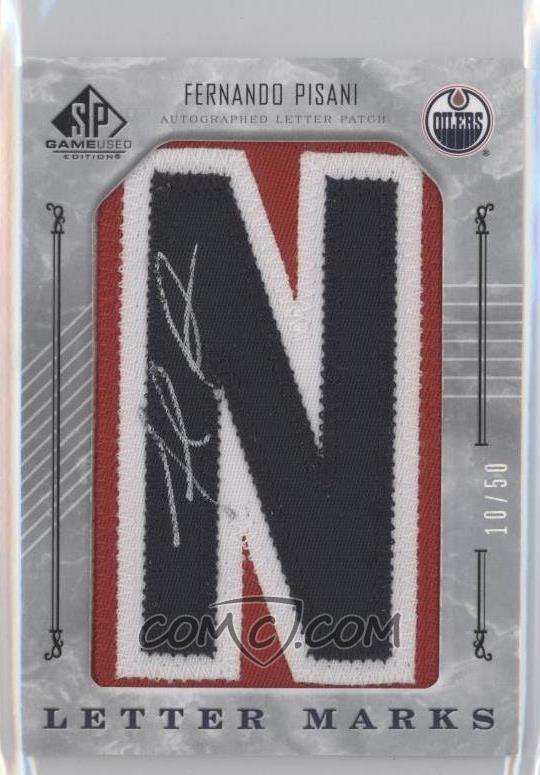 Which was a nearly impossible task thanks to Upper Deck short-printing one letter in most of the names. Based on all the info I could find, there were only two 'P's out there - and neither owner was letting them go. I saw no reason to keep 'ISANI' so I sold them on OMC. 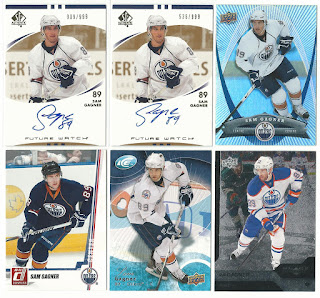 Sam Gagner made the Oilers as an 18-year old, and I collected his cards for a few years. But his career stagnated and my collecting interests changed. I sold one of my higher-end Gagners (an Upper Deck Ice RC #d/99) to pay for a screenwriting seminar. 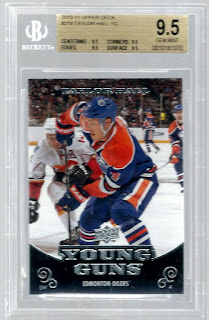 Taylor Hall was supposed to be the cornerstone of the Oilers re-rebuild. He did his part when healthy, but the organization was a mess. I had a hard time following them once Ryan Smyth was traded and Fernando Pisani's career was cut short due to colitis. (He even did a commercial for U.C.)

It took ten years and way too many #1 overall picks for playoff hockey to return to Edmonton (and it took Taylor Hall eight seasons to get there himself.) 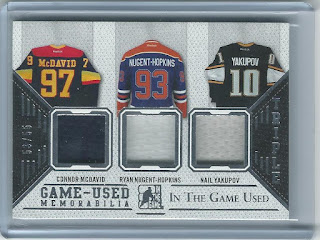 My brother-in-law bought this for me as a birthday gift after I had left my Oilers fandom behind and focused on the Devils. I wouldn't have picked this unlicensed picture of three jerseys but its #d to 55. And it's probably the only Connor McDavid relic I'll ever get my hands on. 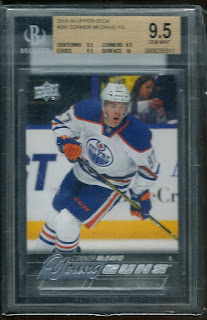 Somehow I pulled a Connor McDavid Young Guns RC out of a blaster box I bought at Target. A short time later I noticed that the price of a Gem Mint copy on COMC kept dropping lower and lower due to ePack. And so I bought one for $144 (the most I've ever paid for a single card on the site) then sold mine on eBay for about 90% of that.

It was tough to let go of the exact copy I pulled; this was the second best card I ever got in a pack and I was very excited and happy that day. But I knew it was the right thing to do.

Earlier this week I thumbed through a Beckett Hockey price guide at Barnes & Noble.. an ungraded McDavid RC was $300 when I pulled the card. It's $500 now. Crazy. Not that I trust Beckett values anymore (I'll have a post about that coming soon.) 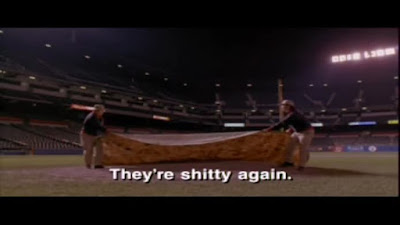 Oilers card I'd like to own: my O-Pee-Chee Platinum retro franken-set will not be complete without card #97. I'd love to get a rainbow parallel but that'll cost a lot of cash.