I've been told that some of these Sports Card Tour posts are very long. Don't worry, this stop will be a brief one. Today we're in Jacksonville.

Jacksonville is home to the AFC South champion Jaguars. The Jags made their third appearance in the AFC title game last season, losing a 24-20 heart-breaker to the Patriots. They have not advanced to the Super Bowl in their 23-year history.

I have a grand total of 76 Jaguars cards in my collection. (I'm tempted to scan them all, but I won't.) 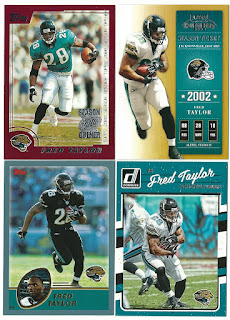 Fred Taylor is the only Jaguar in my star player box - and I'm not certain he should be considered a "star". He rushed for over 11,000 yards in J-ville but was only a Pro Bowler once (for what that's worth.) 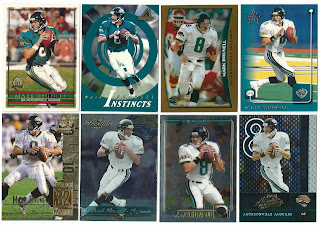 Mark Brunell led Jacksonville to their first two appearances in the AFC Championship game. I have ten Brunell cards in my Jags binder pages (plus a few more in my Packers collection), and at one point I had a replica Brunell jersey in my closet. 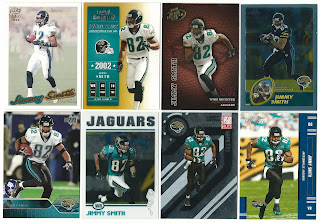 Jimmy Smith was Brunell's top target, and the Jags' all-time leading receiver. The Pacific card at the top left might be a gold parallel, but I keep it in the base card binder. 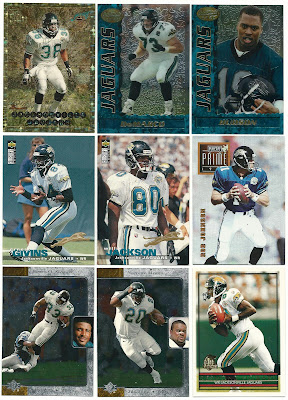 Same with the Mike Dumas above. The jumping Jaguar on the Collector's Choice cards is kind of cool, I wonder why they didn't use that as their logo? Too Lion-like I guess. 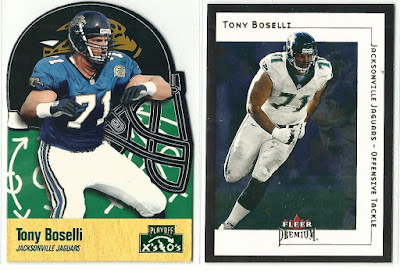 Tony Boselli was the Jags' first ever draft pick. He was named a finalist for Hall of Fame consideration and if he is elected, this Fleer Premium base card will join my four Fred Taylors in the stars/HOFers box. 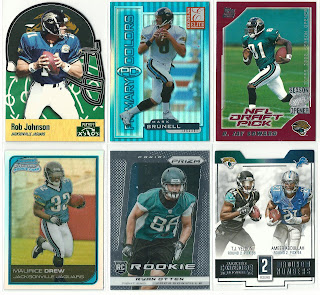 The X's & O's Boselli is one of my best Jaguars cards; these are the rest of my "hits". I had a Maurice Jones-Drew relic or two pass through my collection. (The Bowman Chrome RC mentions his name change on the back but does not update the front for some reason?) 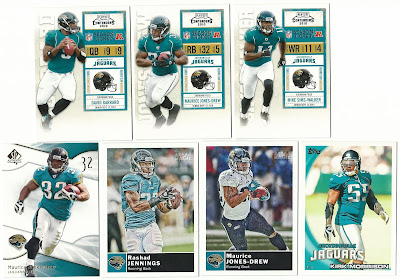 My football card collection was dormant for many years - until I bought a flat rate box filled with cards like these from eBay about 3-4 yrs ago. I tried that again earlier this month, but as I mentioned there were very few football cards included. 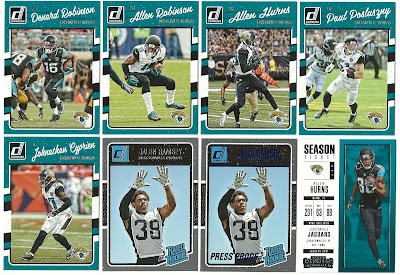 These are the newest Jaguars cards in my collection. I never liked 1990 Donruss baseball (too bland and too red) but the 2016 version is a nice and colorful nod to that old junk wax set. The jumbo box I bought from Dave and Adam's often had the same "rated rookie" in base and Press Proof versions.

Mr. Matthew Scott (Bob Walk the Plank) commented on my previous post and reminded me that the Pirates' minor-league affiliate is in Indianapolis. I've not mentioned minor league teams in these posts (because they're long enough already) but I would be happy to accept any Indianapolis Indians cards -- especially those of pitcher Trevor Williams, who does not have any Pirates cards yet... 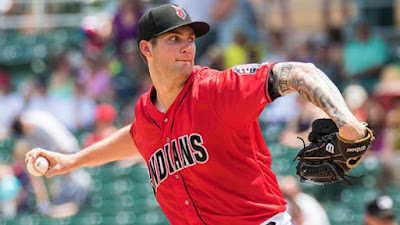 ...and coincidentally also pitched for the Jacksonville Suns. 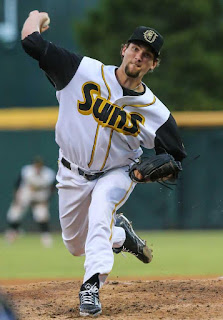 I'm sure there are NFL players who suited up for Indy and Jacksonville, but none immediately come to mind.


Last but not least... Bortles! 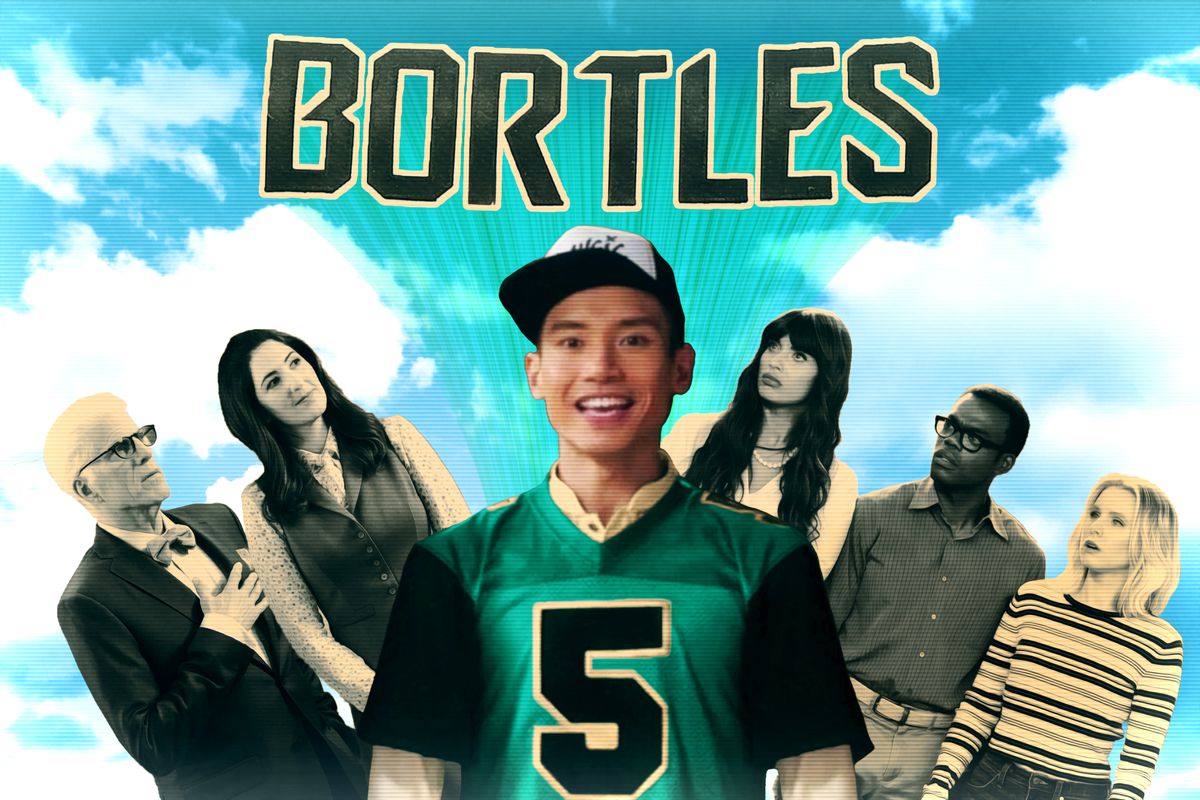 If you're a fan of The Good Place, then you're in on the joke. At least it was a joke before Blake Bortles shocked the world by winning football games. Some female fans of the show did not know Bortles was a real person. Now he's kind of a cult hero. 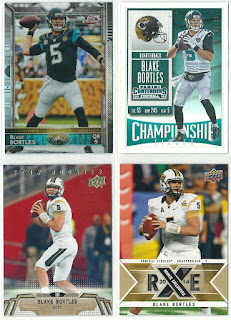 I picked up the top two Bortles cards on COMC for about 50 cents each; the Upper Deck college cards are from a blaster box my brother-in-law gifted me. Maybe I should pick up some more - just in case the Jags prove Michael wrong and win the Super Bowl.

Jaguars card I'd like to own: A Leonard Fournette rookie card, though I'm very picky about 2017 Panini products.Too many cards come from the same photo shoot/angle. 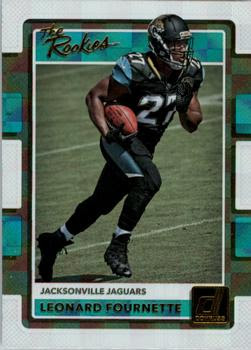 Thanks for reading. Have a great weekend!