The Collector's Sports Card Tour is back on the road after stops in Hockeytown and the City of Champions. Today we're in Green Bay, also known as Titletown.

The smallest city with a pro sports team, Green Bay is home to the 13-time NFL Champion Packers. I've been a Packers fan for 25 years - longer than any of my fandoms except The Simpsons - and as a result, my upstairs room is fully stocked with Packers memorabilia and cards.

One reason I became a Packers fan is because the team is community owned.. but a more direct reason was the late, great Reggie White. 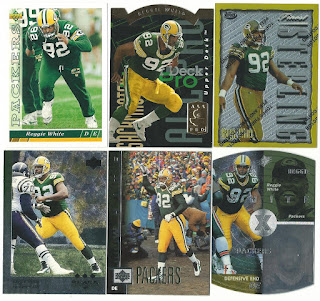 When I was a young football fan just learning about the game, I had a few teams and players that I liked - but no true favorite. It was around the time White became a free agent, and when he chose Green Bay I did as well.

At the time, the Packers were an up-and-coming team with talented young players like Sterling Sharpe, LeRoy Butler...and Brett Favre. Sharpe was my favorite player at first; I hoarded his cards and wore out my replica #84 jersey until the numbers on the back started to crack and peel (I still have it in a bin of old clothes, along with other Packers stuff I've outgrown.) 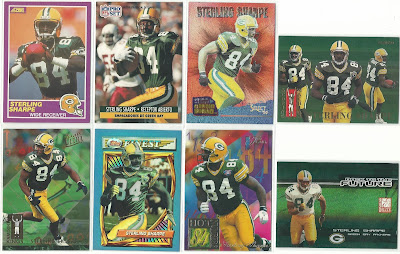 I was crushed when a neck injury forced Sterling to retire after the 1994 season; he was well on his way to a Hall of Fame career and surely would have been a big part of the Packers' Super Bowl victory two years later. 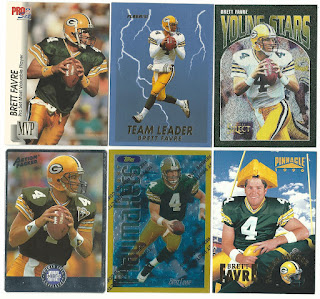 Brett Favre's career spanned my sports collecting peak years: I was starting to follow football full-time when he became the Packers' starting quarterback in 1992, his initial retirement talk started the year I got married, and his career actually ended the year after my daughter was born.

Before I had a family to take care of and a mortgage to pay (and before he wore out his welcome in Green Bay) I spent loads of discretionary income on Brett Favre items. 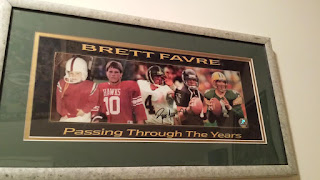 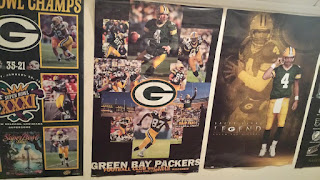 In my quarter century of collecting I've accumulated 640 different Favre cards, at least a dozen action figures, an autographed jersey, an autographed football, an autographed mini-helmet, a cardboard stand-up, a binder full of magazines, two hardcover books, two DVDs, two replica jerseys, and enough memorabilia to fill a man cave (which was the whole idea, except my house is too small to display them all.) 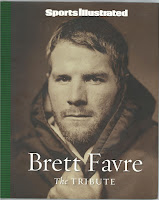 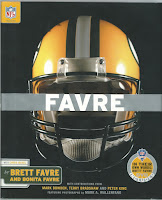 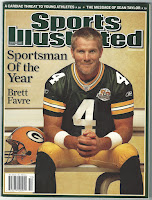 In fact the one Favre item missing from my collection is a certified autographed card. Probably because the one I would want is over $250 and I have other collecting interests right now (and I don't have the budget for big-ticket Brett Favre items anymore.)

Nearly all of my Favre cards are in one big binder (plus a few overflow pages.) Here are some that are not, either because they're too thick or too tall. 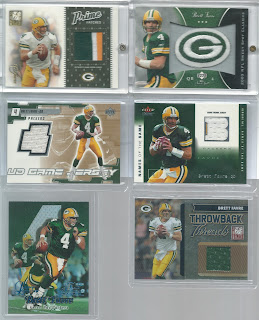 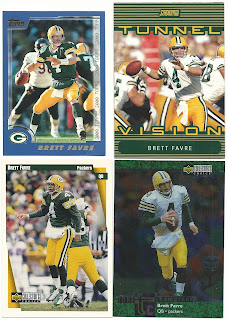 Here's a look at the inside of that Stadium Club Tunnel Vision card: 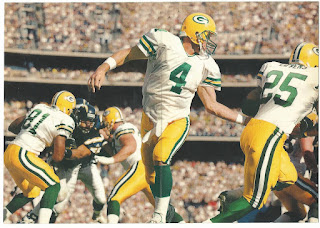 The other Super Bowl-winning quarterbacks in Packers history are also represented in my collection - in much smaller numbers, of course.

I can probably count my pre-1980 football cards on one hand, and none of them are legends like Bart Starr. It was always in the back of my mind to pick up a vintage Starr card but I never did. 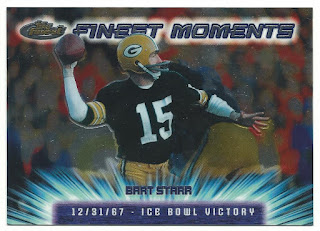 I do have one interesting item, though..the LCS I used to shop/work at bought a collection of Sports Illustrated back issues from the 1970s and early '80s. As payment for a "hard" day's work I was able to take home a few, including this one from 1975: 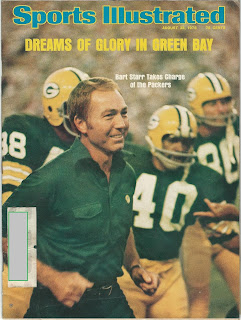 Aaron Rodgers is arguably a better passer than both Bart and Brett. The future Hall of Famer isn't as durable as Favre - but he's a lot more accurate. 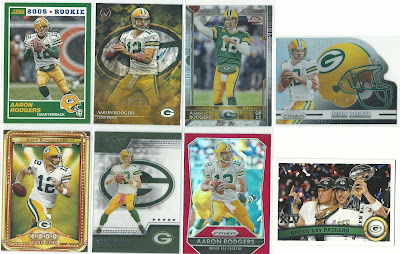 Green Bay missed the playoffs in 2017 for the first time since Rodgers' first full season as the Packers' starter, due to a 3-6 record without Aaron under center. There have been reports that Rodgers is unhappy with the Packers' personnel decisions this off-season, but he put those rumors to rest today. 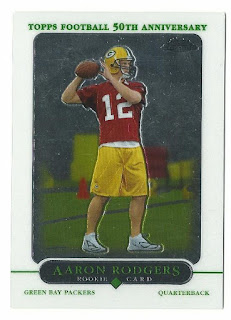 The best Packers card in my collection is this Rodgers rookie card from 2005 Topps Chrome. I paid $55.20 for this card on COMC in January 2015, which sounds like a good deal - but a few years prior to that I passed on an even better one.

I thought about buying an Aaron Rodgers Playoff Contenders RC somewhere around 2007, when he was still Brett's backup. I think it ended at about $102 on eBay but at the time I couldn't justify paying that much for a card of someone who might not ever start for the Packers :facepalm:

While pulling cards for this post I decided to count up my Packers cards. Not including my Binder o' Brett I have 1,446 cards. Add the 600+ Favres and I'm at about 2,050 different Green Bay cards (give or take a pack.) I've downsized my inserts/relics a bit (unless there's a stash of 'em buried deep in my closet somewhere) but that's likely the most cards I have of any one team except maybe the Red Sox. 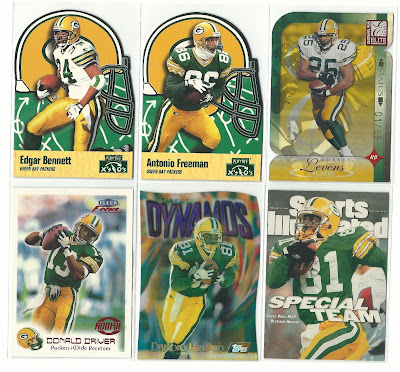 Some of my favorite Packers 'hits'. The Donald Driver RC was part of a shopping spree I treated myself to upon passing my driving test. It still amazes me that Brett Favre is one of few Super Bowl-winning quarterbacks who didn't win SB MVP - but Desmond Howard deserved it. 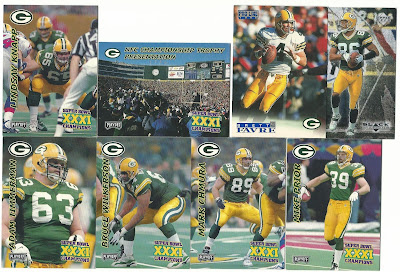 One of my binders is full of (non-Favre) Packers cards from 1995-2000 only, yet I'm still finding '90s cards I need. These Playoff Super Bowl cards came from Brian (Highly Subjective & Completely Arbitrary) in a 50/50 trade. (p.s. Since I just added thousands of new traders from the "mystery box" I will probably do some variation of 50/50 again this year.) 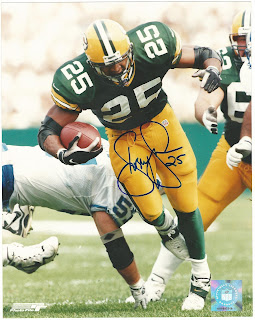 Before Dorsey Levens emerged, the Pack desperately lacked a running back. (I know this from struggling with Darrell Thompson and Reggie Cobb in Tecmo Super Bowl) This 8 x 10 auto was one of a handful I purchased at a memorabilia store in the mall.

Jerry Kramer was finally elected to the Hall of Fame this February, nearly 50 years after playing his last game. Fuzzy Thurston lined up alongside Kramer for those great Green Bay teams of the 1960s. This autographed card was a gift from my high school best friend, who got the card from his mother. 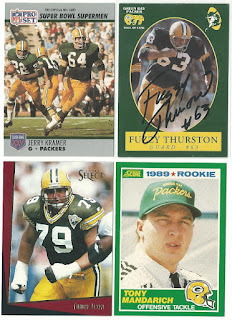 
Pour one out for Jordy Nelson, as BWTP might say. 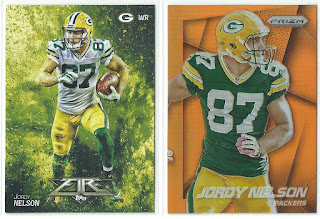 I need more of these Topps Fire cards. 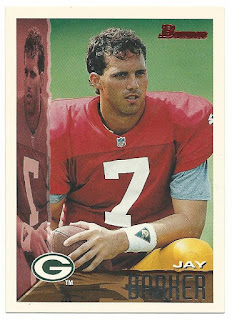 Hey, does anyone know a Jay Barker fan? 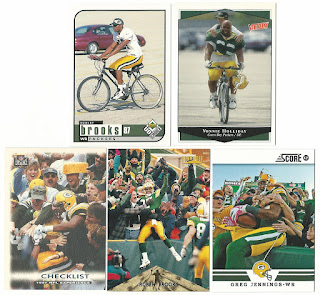 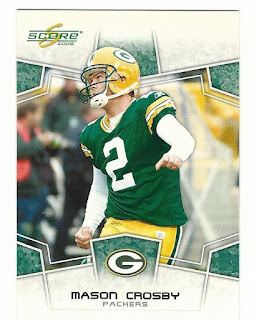 Mason Crosby is the Packers' all-time leading scorer, which doesn't mean as much in football as it would in hockey. (Doesn't "Mason Crosby" sound more like a hockey player's name?) 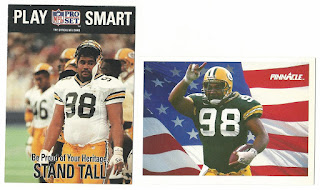 #Pride. Esera Tuaolo came out after his playing days ended and has been an advocate for LGBT rights. He appeared in a Chili's commercial about ten years ago, and more recently was a semi-finalist on The Voice. He's quite an interesting guy - and a talented singer. 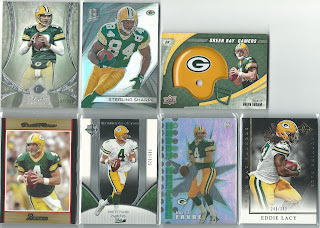 Finally, here's a sampling of my thicker Packer cards - including an Aaron Rodgers Five Star and a Sterling Sharpe Spectra. The Green Bay Gamers cards are really neat, I'll have to add another one to my collection someday.

The Packers were active in free agency for once, adding Jimmy Graham and Jersey guy Muhammad Wilkerson among others. In addition, the pack have the most picks of any team in the upcoming NFL draft - including #14 overall. That infusion of talent should appease Aaron Rodgers and get the Packers back into the playoffs where they belong :)


Packers card I'd like to own: Besides a Brett Favre auto? I still don't have Favre's 1992 Stadium Club high series base card, which is probably beyond my budget as well. If I'm limiting this to low-end wants, I'd like to add some cards of current Packers like Geronimo Allison and Jake Ryan.

Next tour stop: I wish it was Hartford..but we're headed to Houston next.